The strong rally in corporate debt markets triggered by a flood of central bank stimulus is spooking veteran bond investor Dan Fuss, who warns that investors are taking the most risks he has seen in the past six decades.

Central banks last year sharply cut interest rates and unleashed vast bond-buying programmes to soften the economic impact of the pandemic, at a scale that even dwarfed measures taken to combat the financial crisis.

The stimulus has helped produce a remarkable market comeback, lifting stocks to record highs and helping pin government bond yields near historic lows. But the investor scramble for higher-returning but lower-rated, riskier debt is now so ferocious it is unnerving money managers like Fuss, the vice-chair of $353bn investment house Loomis Sayles.

“It scares me when I see what is given up in terms of natural prudence and caution,” Fuss said in an FT interview. “We’ll have to wait to see how things play out, but the reach for yield has overridden the fear factor.”

Fuss started his career in finance in 1958, when he left the US Navy for a job at Wauwatosa State Bank in Wisconsin. After a stint managing Yale University’s endowment he joined Loomis Sayles in 1976 and managed one of its flagship bond funds until he finally stepped back from day-to-day portfolio management earlier this year, aged 87.

Over that period Fuss earned many awards, including being named in the Fixed Income Analyst Society’s Hall of Fame in 2000, and winning Morningstar’s yearly Outstanding Portfolio Manager Award as recently as 2019.

Yet the excesses of the current environment were the greatest of his career, exceeding even those of the pre-financial crisis era, according to the bond market veteran. “I’m optimistic, but you have to keep your wits about you. The bond market is not as safe and secure as it used to be,” Fuss said. “There are risks everywhere.”

Fuss’s comments were echoed by Goldman Sachs chief executive David Solomon earlier this week, with the former junk bond banker also warning that markets were vulnerable to a setback.

“When I step back and think about my 40-year career, there have been periods of time when greed has far outpaced fear — we are in one of those periods,” Solomon told Bloomberg at a conference in Singapore. “My experience says those periods aren’t long lived. Something will rebalance it and bring a little bit more perspective.” 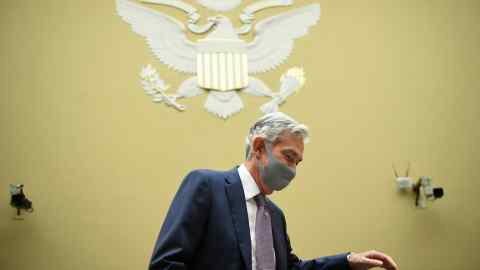 Fuss was sceptical that the Federal Reserve would be able to lift interest rates significantly in the coming years — despite the likelihood of 1950s-style “spurts” of inflation — so the Loomis Sayles executive said he was mostly worried about the high-yield bond market, often also called junk bonds.

The average yield of US high-yield bonds spiked to a peak of over 11 per cent in March 2020, but fell to a record low of under 4 per cent earlier this autumn. Despite a recent bout of bond market volatility triggered by rising inflation concerns, junk bonds still offer an average yield of 4.4 per cent.

While that is attractive compared to the 2.3 per cent offered by safer investment grade-rated US corporate bonds — and the miserly 1.6 per cent yield of the 10-year Treasury note — it is still almost half the levels seen at the peak of the 2007 credit boom. The yield of the riskiest corporate debt rated CCC, the lowest rung possible without actually being in default, has tumbled from a 2020 high of roughly 20 per cent to 7.8 per cent.

“Portfolio managers looking at this market are not dumb, they are aware of the risks. But if you run a high-yield fund and retreat to Treasuries then you’re going to underperform,” Fuss said.

The US Treasury’s Office of Financial Research — set up in the wake of the 2008 credit crunch to monitor and analyse threats to the financial stability of the US — noted this in its annual report to Congress this week.

While stressing that the vulnerabilities of the debt binge were currently moderated by a corporate earnings boom, thanks to a powerful economic recovery, the agency warned that longer-term risks were looming.

“High debt burdens result in a corporate sector that is more fragile, riskier, and more vulnerable to shocks,” the OFR said. “If the current corporate earnings recovery falters or interest rates rise materially, the corporate sector could be prone to a wave of defaults. Such a scenario could impose large losses on lenders and investors and affect economic activity adversely.”