What we learnt from Roger Stone’s indictment

New details emerge of relationship between president’s campaign and WikiLeaks

With the arrest of Roger Stone on Friday, Robert Mueller has now targeted a sixth associate of Donald Trump.

The indictment offered fresh details on the relationship between the president’s campaign in 2016 and WikiLeaks, which published a trove of emails stolen from the Democratic Party during the election.

Mr Stone, a Republican political operative and longtime friend of Mr Trump, is charged with obstruction, witness tampering and lying to Congress.

Mr Stone has vowed that he would fight the charges.

Here’s what we learnt from the indictment:

The charges portray Mr Stone, who had worked on the Trump campaign until August 2015 and remained in “regular contact” thereafter, as the point-man for information about WikiLeaks and the timing of its email dumps.

The first publication of emails by WikiLeaks came on July 22 2016, a little over a month after the Democratic National Committee announced it had been hacked by the Russian government. On October 7, WikiLeaks would publish the first batch of emails hacked from John Podesta, Hillary Clinton’s campaign chairman.

The indictment alleges Mr Stone, “in or around June and July 2016,” had told “senior Trump campaign officials” that WikiLeaks had “documents whose release would be damaging to the Clinton campaign.”

The reference to June is tantalising, suggesting Mr Stone had advance knowledge that WikiLeaks, Organisation 1 in the indictment, had the DNC emails even before their publication. The date is not mentioned again in the rest of the indictment and Mr Mueller does not explain how Mr Stone acquired the alleged information.

On Sunday Mr Stone told ABC’s This Week with George Stephanopoulos that he may co-operate with the Mr Mueller and said he would “testify honestly” if asked questions about the 2016 campaign.

“I’d also testify honestly about any other matter, including any communications with the president. It’s true that we spoke on the phone, but those communications are political in nature, they’re benign, and there is certainly no conspiracy with Russia,” he added. 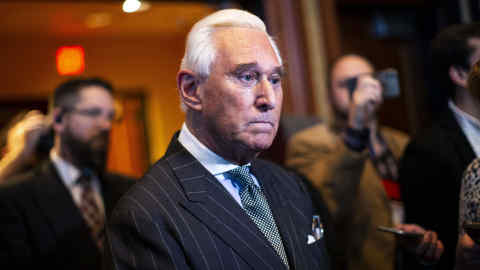 After the first batch of documents were published by WikiLeaks in July, people at the highest levels of the Trump campaign wanted to know what the organisation had and when they would publish it, according to the indictment.

“A senior Trump campaign official was directed to contact Stone about any additional releases and what other damaging information Organization 1 had regarding the Clinton campaign,” claims Mr Mueller.

The senior official is unnamed, and no reference is made as to who allegedly “directed” them to tap Mr Stone for information on WikiLeaks.

In October, shortly before the release of the Podesta emails, Mr Stone had further conversations with a different, “high-ranking” Trump official, according to the indictment. The official was Steve Bannon, who had joined the campaign in August 2016, according to a person familiar with the matter.

Julian Assange, the WikiLeaks founder who lives in the Ecuadorean embassy in London, had held a press conference on October 4, but did not publish any new documents that would damage the Clinton campaign. Soon after, Mr Bannon emailed Mr Stone asking: “What was that this morning???”, according to a copy of the emails published last year by the New York Times.

Mr Stone’s response is referenced in the indictment: “Stone answered that the head of Organization 1 had a ‘serious security concern’, but that Organization 1 would release ‘a load every week going forward’.”

When the Podesta emails were published a few days later, on October 7, an associate of Mr Bannon’s texted Mr Stone: “well done”.

The Russia connection, or absence thereof

Last year, Mr Mueller indicted 12 Russian intelligence officers for hacking Democratic emails during the 2016 election and accused them of passing the stolen documents to WikiLeaks.

The indictment against Mr Stone prominently notes the fact that the DNC had announced, in June 2016, it had been hacked by “Russian government actors”, pointedly suggesting that he and the Trump campaign should have known the source of the stolen emails.

However, it does not claim that Mr Stone’s efforts to contact WikiLeaks or gain information about its releases broke any laws.

And although it sketches a line between Russia and the Trump campaign, via WikiLeaks and Mr Stone, it does not allege any conspiracy or co-ordination, a point highlighted by Mr Trump’s legal team.

“The indictment [ . . .] does not allege Russian collusion by Roger Stone or anyone else,” said Jay Sekulow, a lawyer for Mr Trump, on Friday.

One of the intriguing gaps in the indictment is the absence of any communications authored by Mr Assange or WikiLeaks.

The charges make reference to messages that Mr Stone sent to his associates, urging them to “get to” Mr Assange, and also to information that Mr Stone then returned to the Trump campaign, but we do not hear Mr Assange’s voice or see his messages.

The WikiLeaks founder has not been publicly indicted in connection with the special counsel’s probe. But last year, a court filing in the eastern district of Virginia inadvertently revealed that “Assange has been charged”, although it is not clear what the apparent, still secret charges may refer to.

“The Office of Special Counsel has never spoken with Mr Assange. It remains unknown what criminal charges have been brought against Mr Assange in the eastern district of Virginia. The government continues to refuse to explain to Mr Assange or the public the nature of those charges,” said Barry Pollack, a US-based lawyer for Mr Assange, on Friday.