The world in our PocketShip

At 4.5m, a ‘stitch and glue’ dinghy is the exact opposite of a superyacht. But it’s a happy little daydream regardless

I wasn’t supposed to break the tiller. I mean: no one intends to break a tiller. But I had assured John Harris that I was not that kind of person. I grew up racing, fixing and living on sailboats. I am the kind of person who can be trusted with someone else’s boat, and yet here I am. With a hard jerk to bring the bow of John Harris’s lovely little boat into the wind, I have snapped the tiller clean off and, unable to steer, drifted back to shore where I am standing, waist-deep in the water, holding the boat off a line of rocks as Clyde, my 10-year-old son, offers advice from the cockpit.

This is all bad. What is much worse, though, is that John is still watching from the shore. I know, and I know that John knows, that I was having trouble getting the bow of his boat into the wind because I had neglected to drop the centreboard. Without getting too deep into the physics of a sailboat, it turns out that I am exactly the kind of person who breaks tillers. John is kind enough to avoid being too explicit about any of this in front of my son, and calls back to his shop for a replacement.

John Harris owns and runs Chesapeake Light Craft, a company in my hometown of Annapolis, Maryland. He sells plywood kits to make little boats – kayaks, dinghies, skiffs, stand-up paddleboards. I have been pondering a koan lately: what is the exact opposite of a superyacht? I got in touch with John because I think one answer is the PocketShip.

The PocketShip has the plumb bow and some of the lines of a traditional crabber from England’s Cornish coast, with a cabin just big enough to lie down in, or sit upright. John, who designed the boat in 2007, describes it as a “dinghy with a nice lid on it to keep you dry”. It’s just over 4.5m long, and light enough to tow behind a four-cylinder car. John has offered to let me borrow the first PocketShip he built – his – for a couple of days, which is how I can report that it is in fact light enough that I can stand in the water and, feeling foolish, keep it off the rocks with my own two hands.

Every boat represents some kind of freedom. When my mother was a girl, her parents told her she could go anywhere she could get to with the rowboat on a dock at the end of the street. She grew up, she says, knowing she could go to Paris any time she wanted. A superyacht offers the freedom of impunity. If you have one, you can go wherever you want, whenever you want, with whomever you want. A classic sailing yacht like the Hinckley Bermuda 40, which I have always coveted, offers the freedom of possibility. The name is not an accident; that boat could take you to Bermuda, if you wanted.

A yacht on a trailer, like the PocketShip, offers the kind of freedom that is available to you if you are honest with yourself about what you are actually going to do on a boat. I am probably not going to sail from Annapolis to Europe. On any given weekend, I am probably not even going to sail across the Chesapeake Bay to Oxford, Maryland. But will I hitch a PocketShip behind our 12-year-old Honda minivan in the middle of the week, drop it in the water at the public ramp at Tucker Street about a mile away and sail into town for an overnight with my kids? That is exactly my plan.

With a new tiller and the centreboard down, Clyde and I tack gently out of Weems Creek through a few squirrelly little wind shifts, hit the Severn River, turn right and head downtown. I let Clyde take the tiller, and we work on finding the groove, the perfect little point where you’re making progress upwind, but you’re not headed so high that the wind begins to work against you. Clyde reports that he likes being in control of the PocketShip “because I can feel it” – the boat responds to small movements like a racing dinghy, and when we find the slot the PocketShip digs a shoulder in, hunches forward and takes off.

PocketShips, like all the designs from Chesapeake Light Craft, are built using a technique called stitch and glue. They do not require the complex, precise joinery of traditional boatbuilding. In stitch and glue, you merely need to get panels of marine-grade plywood close enough to each other so you can stitch them together with stiff copper wire, then apply glassfibre cloth, with a fillet of thickened epoxy around the seams. The technique was invented by Ken Littledyke, an English canoe maker who figured out how to take advantage of new supplies of plywood and polyester resin available after the second world war.

Stitch-and-glue boats became popular in England when Barry Bucknell, a television host with a DIY show, built a design that had been commissioned as a publicity project by the Daily Mirror – the Mirror dinghy. It could sail, motor or row, it cost £63 and 11 shillings to build, and it fitted upside down on top of a Mini. After the Daily Mirror launched it at the 1963 London Boat Show, more than 70,000 were built. People living in terraced houses had to remove windows to get the dinghies out of the family sitting room after finishing them. In an article for the Journal of Design History, Andrew Jackson at the University for the Creative Arts argued that the Mirror dinghy was part of a broader movement giving men a role at home in the workshop, as builders and repairers. It was a way to democratise boats. It no longer took a craftsman to get out on the water, but it was also something to do with and for your family – Barry Bucknell built one for his son.

Twenty-five years ago, to make a stitch-and-glue boat you had to measure and cut the ply-wood yourself and connect sheets through a scarf joint, a technique I learned when I was 12 from a boatbuilding instructor who impressed upon me a fanaticism for sharpening the blade of a block plane before every use. But even those skills are now outdated. At Chesapeake Light Craft, computerised cutters neatly section patterns out of plywood, including puzzle joints to connect sheets, which look exactly how they sound. Computer design software and robotic cutting have made even more complex hull shapes possible for home builders – such as the PocketShip.

You can buy the plans and a manual for a PocketShip for $300, and a complete kit with cut plywood, glassfibre cloth, epoxy resin and all the sailing gear for about $10,000 (or $48,000 ready-built on the trailer). It is not the highest-selling boat at Chesapeake Light Craft, says John. But it does get the most hits on the company’s website. The PocketShip is a happy little daydream.

On the Severn, Clyde and I pass the United States Naval Academy, where midshipmen training to become officers are trying out manoeuvres on the Yard Patrol, small steel-hulled training ships kept at the naval station across the river. We get close to the mouth of the Severn; the PocketShip is so shallow that I am haphazard about piloting, and we drop anchor right off a beach and pull out peanut butter and jelly sandwiches for lunch. We sit under the watchful eye of an osprey, complaining through sharp chirps that we are too close to her nest. We discuss the shape of the clouds.

I suffer from a mild, ironic curse. I love boats, and my wife gets horribly seasick. We will never own a big boat that can sail across an ocean. This is not a deal-breaker for me – I know a lot of unhappy people with big boats, and I’d rather be happy without the boat. Our compromise is a fleet of kayaks, canoes and paddleboards, and complex plans where I take some of our children out on the water and then we swap. After lunch, Clyde and I pick up a mooring off the City Dock in Annapolis, then take a water taxi to meet the rest of the family for crabcakes. We trade kids – Clyde has to return to land for a school concert, and I return to the PocketShip with Phebe, a 12-year-old who, unlike her twin sister, is ecstatic to miss a day of school.

Phebe and I don’t really have a plan. We’re going to head back upriver to find somewhere to anchor for the night, so we drop the mooring to get started. The wind has picked up and shifted right into our face, so we put a reef in – making the sail smaller – and start looking for a place to hunker down. There is no cleat for the mainsail on the PocketShip. Like a racing dinghy, you have to hold the sheet – the rope controlling the sail – in your hand as you sail, so you can dump it quickly when you’re hit by a gust. This demands muscles I have not used in decades, but it’s pleasant to feel the PocketShip take back off like a shot when I haul the sheet back in.

Since the start of the pandemic, sales at Chesapeake Light Craft have gone up 70 per cent. People were at home with their children, looking for something to do. Those brand-new to boat-building are the company’s target audience; each boat comes with a thick manual, with photos of every stitch and fillet. The manual is part of the dream, still frames of the amazing time you will have doing something meaningful with your family. The boat begs for customisation, and Phebe and I talk about what we would do. Bespoke cushions below, with more tailored storage options. A drawer for the stove, possibly. A different place for the small toilet, definitely.

The shelter we find from the wind for the night is, essentially, home: Weems Creek, right where I’d started. There’s a salt marsh at the head of the creek, and we tuck in just behind it. We heat up hot chocolate on the stove. We turn on our headlamps, proof that we are doing something really cool. We wash up in a plastic bin in the cockpit, and brush our teeth in our cleaned hot-chocolate mugs. Phebe tells me that when she was little, she would lie to us and say that she had brushed her teeth when she hadn’t. I resolve to punish her by sharing this information in print. And we stretch out in the cockpit in sleeping bags, turn off our headlamps and begin making plans for a bucket list with low stakes: tiny, achievable little adventures.

Chesapeake Light Craft sells through fyneboatkits.co.uk in Cumbria in the UK

READ MOREThe top 10 HTSI stories of 2022
The smaller the campervan... 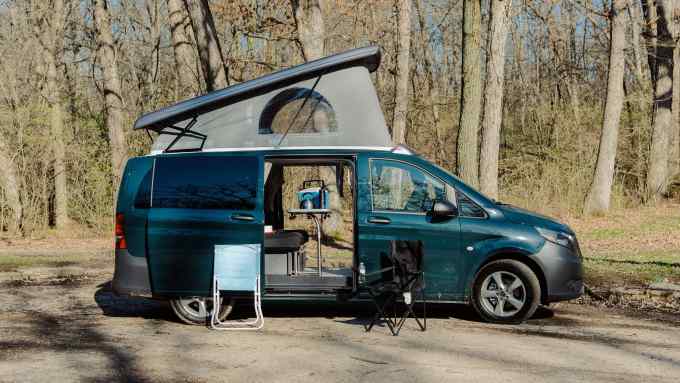