EU lawyers have insisted in court that the UK’s decision to leave the bloc cannot be unilaterally withdrawn, warning that such a right could be abused by governments seeking a better deal from Brussels.

In a hearing at the European Court of Justice to decide whether Brexit could be cancelled by the UK, lawyers from the European Council and European Commission insisted EU governments must agree if a member state that had asked to leave were later to want to end the process.

Anti-Brexit campaigners led by a group of Scottish MPs and MEPs, argue that Article 50, the EU exit clause invoked by the UK in 2017, can be cancelled by the British government without approval by the rest of the EU. Tuesday’s hearing in Luxembourg was referred to the ECJ by Scotland’s highest court.

The UK government said the issue of how Article 50 could be cancelled was “hypothetical” as it had no intention of staying in the EU. But the campaigners bringing the case hope a decision in their favour could influence UK MPs when they vote on the Brexit deal next month, encouraging them to reject UK prime minister Theresa May’s withdrawal agreement and ultimately reverse Brexit.

Hubert Legal, the European Council’s top lawyer, insisted that whereas the UK’s decision to trigger Article 50 was voluntary and could be taken alone, cancelling it would require unanimous support from EU governments to protect the interests of the union.

“There is no parallelism between the right to notify and the right to take back,” said Mr Legal. “National processes cannot suffice to pull the carpet on which everyone has been forced to stand.”

Triggering Article 50 starts a two-year exit process from the bloc — as in the case of the UK, which is due to leave on March 29 next year.

The crux of the EU’s argument is that allowing a member state to stop the clock on its own exit could lead to governments’ misusing the process to angle for concessions.

In such a situation, the 24 months initiated by Article 50 would be transformed from a period in which to organise a country’s exit into a negotiation to “charm the notifying sheep back to the flock” on terms that would weaken the EU project, said Mr Legal.

“Notification without risk, the launching of a separation process by an unstable process of developments still incomplete at the national level, could lead to such disaster,” said Mr Legal.

Europe Express
Article 50 gets its day at the ECJ 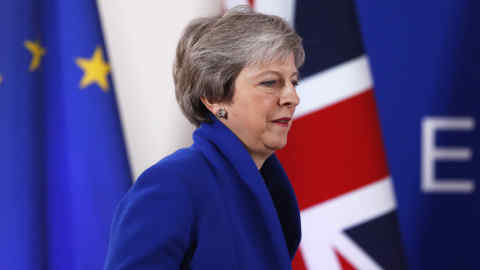 Aidan O’Neill, QC for the anti-Brexit campaigners, said only a unilateral cancellation could stop a situation where the leaving member state “has the power to destroy the rights of another member state”. The claimants have argued that EU law gives protections to the rights of its citizens, which would be harmed by Brexit.

It is unlikely that the ECJ will issue any final verdict before UK MPs’ “meaningful vote” on Mrs May’s Brexit plan on December 11.

Koen Lenaerts, president of the ECJ, said any final decision would come “quickly”. It will be preceded by a non-binding opinion that campaigners hope will be issued before the end of the year.

Mr Lenaerts said the EU was facing a crucial question on an “existential matter of EU law”. Article 50 represented a “textual vacuum which somehow needs to be filled”, he said.

During the hearing, the UK government said petitioners were seeking to use the ECJ to get “political ammunition to pressure the UK parliament”.

“Pandora was given a large box on her wedding which she was told not to open,” said Richard Keen, QC for the UK government. “We respectfully plead the court should not open this box.”

Video: What you need to know about the Brexit withdrawal treaty