Clive Cookson in London and Hannah Kuchler in New York

Scientists have identified a new set of 68 genes associated with a high risk of developing severe Covid-19 as geneticists seek to understand why people vary so much in their susceptibility to the illness.

The preprint paper released on Thursday by analytics company PrecisionLife, which used data from UK Biobank, adds to a growing number of genetic clues about vulnerability to the virus.

The phenomenon of some people suffering grave illness while others are infected without symptoms despite being in similar environments has caused widespread puzzlement.

Twelve of the 68 genes identified by Oxford-based PrecisionLife are involved in the heart and blood circulation, including the regulation of calcium levels. This tallies with the observation that the cardiovascular system often undergoes severe stress in patients hospitalised with Covid-19.

Last week an international academic team found two areas of human DNA that differed significantly between 1,600 patients in Spain and Italy who suffered Covid-19 respiratory failure and people who bore no signs of disease.

One set of genes determines blood group: people with group A blood (roughly 30 per cent of the global population) have a higher risk of serious illness than group O, the researchers found.

The second covers genes involved in the ACE2 receptor, a protein on the surface of human cells that the coronavirus uses as an entry point, although their precise connection to Covid-19 remains unclear.

The findings are “just a start”, said Daniel Wilson, an expert in infectious disease genomics at Oxford university. “But they are a pointer to the way human genetic analysis will help to explain why some people get severe Covid and others escape.”

The potential influence of genetic discoveries is huge. They can lead to better drugs to treat Covid-19 because they improve scientists’ understanding of the disease’s biology.

Longer term, decoding a patient’s DNA once infection is confirmed could enable a personal treatment plan to be tailored to their likely genetic response to the virus.

“At some point it may be possible to measure people’s genetic risk score for susceptibility to Covid,” said Prof Rory Collins, chief executive of UK Biobank, which has several projects to match genetic data on its 500,000 participants with their Covid-19 experiences.

“We could then identify particularly vulnerable people who need to be protected if there is an outbreak of the disease nearby,” he added.

Two international consortiums have been formed to co-ordinate the research. Both aim to share all data and analysis openly and release results as quickly as possible.

The Covid-19 Host Genetics Initiative is led by Mark Daly and colleagues at the Institute for Molecular Medicine Finland. The other project, the Covid Human Genetic Effort, is led from the US by Helen Su of the National Institutes of Health and Jean-Laurent Casanova of Rockefeller University.

Coronavirus treatment
Coronavirus numbers — what we have learnt from the pandemic 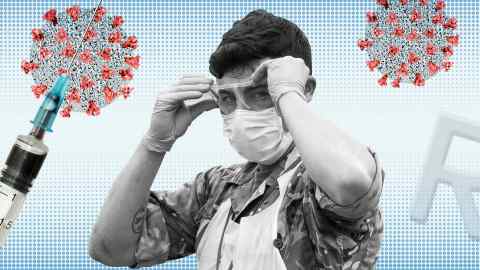 The US project is searching for variations in single genes that would account for the unusual cases of young and healthy individuals who have a life-threatening response to Sars-Cov-2 infection — and for people who seem to resist infection even when they are exposed multiple times.

“There are people, for example the spouses of someone who is critically ill, sharing a bed with someone and remaining not only asymptomatic but even testing negative,” said Prof Casanova.

Aids researchers have found that genetic mutations on the CCR5 protein, which HIV uses to enter human cells, make some people resistant to infection by that virus. There may be comparable variations in the ACE2 receptor that would affect their susceptibility to Sars-Cov-2.

Scientists are using human DNA in different ways to investigate Covid-19. Some researchers are using genetic data already accumulated for other purposes, such as UK Biobank, and matching it with any information that emerges about the subjects’ Covid-19 experience. Others are obtaining fresh genomes from Covid-19 patients.

There are also different levels of analysis. Top of the range is “whole genome sequencing” which reads all 3bn chemical letters of DNA that store the genetic inheritance of every human being. Next comes “exome sequencing” which just reads the genes that directly make proteins, the most active biological molecules.

The third level — faster and cheaper than the other two — is “genotyping”. It focuses on an array of 500,000 to 1m DNA letters across the genome chosen because they represent hotspots of individual variation.

The largest database of genotyped data is held by 23andMe, the California-based consumer genetics company, which is keen to see it used for Covid-19 research. Its first study got responses from 750,000 people and provided early evidence that those with type O blood were less likely to test positive for infection — a finding confirmed last week by the academic study in Spain and Italy.

“The speed at which we can conduct these studies has increased enormously,” said Joyce Tung, 23andMe’s vice-president of research. Once it could take a decade to understand how a gene influenced a disease, she added. Now it can be done in a matter of months.