Mangroves in the Philippines have a new supporter: the makers of Charmin toilet paper, Bounty paper towels and Puffs facial tissues.

Procter & Gamble, the world’s largest consumer goods company, this month announced a joint project with the NGO Conservation International to protect and restore tropical trees in the watery province of Palawan as part of a suite of nature-based projects. The aim is to help P&G reach carbon neutrality in its operations for the coming decade.

Yet the announcement drew a scathing response from the Natural Resources Defense Council, a US-based environmental organisation that has been lobbying P&G about its use of wood pulp from Canada’s boreal forest, a high-latitude region that serves as a vast carbon sink and is home to threatened species such as boreal woodland caribou.

The NRDC called the announcement “an infusion of money to avoid full responsibility”, adding: “P&G is now promising to invest in protecting carbon sinks as a way to offset the rest of their operations emissions by 2030, while continuing to use climate-critical boreal forest fibre for its throwaway tissue.” Another campaign group, Stand.earth, called the new initiative “the ultimate greenwash”.

The response cuts to the heart of dilemmas faced by consumer goods companies seeking to invest in nature-based projects as a way to help combat climate change.

While such initiatives are expected to provide a significant element of climate change mitigation — they can deliver more than a third of the measures needed over the next decade to stabilise global warming to less than 2C, according to the UN Global Compact — funding such projects opens companies up to accusations of failing to deal with emissions from their supply chains.

P&G’s nature-based projects will aim to offset about 30m tonnes of carbon dioxide emissions over the coming decade, roughly the output of 6.5m passenger vehicles operating for a year, according to a calculator run by the US Environmental Protection Agency. It aims at least to halve emissions from its operations and the energy it buys in — known as scope 1 and 2 emissions — by 2030, with nature-based solutions used to offset the rest.

“We are starting, really at scale, to invest in natural climate solutions,” says Virginie Helias, chief sustainability officer at P&G. “The way we approach this is for the long term . . . It’s not just about planting trees . . . It’s actually about protecting and preserving, sometimes restoring, high carbon stores.”

P&G is now promising to invest in protecting carbon sinks as a way to offset the rest of their operations emissions . . . while continuing to use climate-critical boreal forest fibre for its throwaway tissue

The company says it has not yet decided who will assess and monitor the new projects. Stuart Lemmon, chief executive of sustainability consultancy EcoAct, says P&G needs credible assessments of each one’s carbon value. EcoAct typically supports projects accredited by bodies such as Verified Carbon Standard or The Gold Standard, then verified by another third-party group such as certification specialists Bureau Veritas.

Carole Ferguson, head of investor research at CDP, a disclosure system for environmental impacts, adds that such nature-based projects are insufficient: “It’s not good enough . . . P&G should be looking at more active decarbonisation before they get to the offsets.”

All consumer goods groups should look to decarbonisation first, she says, since they have opportunities to cut emissions along their value chains. “In sectors like aviation, where the technology to switch [to clean energy] is so much more challenging, you might say that for those industries carbon offsets must be part of the solution,” she says.

The emissions from P&G’s operations are dwarfed by those along its value chain, from felling of trees to the use of hot water with its laundry products in consumers’ homes. Emissions from its operations account for about 2 per cent of its overall footprint, according to Rick Stathers, climate change specialist at asset manager Aviva Investors.

“Whilst it is excellent that the company has established initiatives to reduce the emissions of its operations, it needs to do more to focus on those associated with the use of its products,” says Mr Stathers. “Investors will increasingly be looking for these signposts of value chain climate ambition.”

P&G’s estimates its scope 3 emissions are dominated by “use of sold product”, which was equivalent to almost 200m tonnes of carbon dioxide in 2018. But these calculations have shortcomings — for example, they use global assumptions to calculate water temperature and usage, rather than using country-level data, says Ms Ferguson.

P&G also lacks a target for overall scope 3 emissions reductions, though it says it has reached a target of 70 per cent of all laundry loads being carried out in an energy-efficient way. Some consumer goods groups have already put in place such targets — for example, L’Oréal aims to cut its emissions, including scope 3, by a quarter by 2030.

A report by CDP last year found P&G less ready than many of its rivals for a low-carbon transition: it ranked sixth out of seven big household and personal care companies. CDP, which provides data to many of the world’s largest investors, ranked it last in its category for scope 3 emissions disclosures; rivals Colgate-Palmolive, L’Oréal and Unilever scored highly, with Colgate winning praise for detailed calculations based on data about how its products are used in each country. Ms Helias says P&G is working with CDP to improve its performance and scores.

P&G’s impact on forests also forms part of this broader picture. The NRDC calculates that if P&G halved its use of virgin forest wood pulp in its tissue products, using recycled fibres instead, this would cut P&G’s carbon emissions by 5.3m tonnes a year.

Ms Helias defends P&G’s record on forestry. “For each tree we use, another is reborn,” she says. Environmentalists argue, however, that destruction of old trees harms biodiversity and soil, which take many decades to recover.

But Ms Ferguson remains unconvinced, saying: “I’d be much more comfortable as an investor if I thought they had completely mapped out their product footprint.” 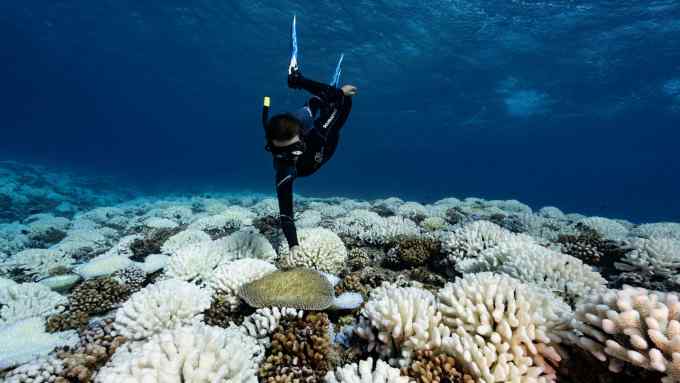