Hedge funds have scaled back the size of their bets in the stock market in recent days after volatility caused by groups of amateur traders pushed up shares in companies such as GameStop and inflicted heavy losses on some high-profile firms.

The unwinding of positions has been noted by brokers and may have contributed to the sharp moves in some shares, according to market participants.

Morgan Stanley said in a note to clients that Monday and Tuesday were among the top five heaviest days for so-called de-grossing over the past decade. Funds have not only been covering their short positions — the bets they placed against individual shares — but also selling shares in companies to cut their leverage and reduce their gross exposure to the market.

Professional investors are rethinking their strategies to contend with the growing influence of retail traders and the rising risk of shorting stocks. “If you are a risk manager at a large hedge fund you have to change [your] calculus,” said Greg Tuorto, a portfolio manager at Goldman Sachs Asset Management.

Day traders organising on Reddit message boards have targeted specific short sellers and attempted to inflict losses by piling into stocks against which they have bet. Among the funds was Melvin Capital, run by former Steve Cohen protégé Gabe Plotkin, which became the target of retail traders for its bet against GameStop, video game retailer.

Shares in GameStop have surged 435 per cent since Friday, bringing year-to-date gains to 1,745 per cent. Melvin said on Wednesday it had covered its short and repositioned its portfolio after losing some $3.75bn in the first three weeks of January.

“This is going to change the way investors place their short bets,” said one professional trader. “Now you have a strategy to proactively cause pain . . . and really put the wood to someone. People are going to put things in place to prevent it from happening again.”

Long/short hedge funds — which take both positive and negative positions on stocks — were first to conduct significant de-grossing this week, but multi-strategy and macro funds have also been cutting back, Morgan Stanley said.

The moves came as retail day traders set their sights on an ever-larger number of stocks. Shares in 59 companies on the Russell 3000 rose by more than 10 per cent on Wednesday, even as the index itself fell by just under 3 per cent. The oil refiner PBF Energy gained 33 per cent, the cosmetics company Revlon rallied 32 per cent and the retailer Bed Bath & Beyond jumped 43 per cent.

American Airlines surged after a user on Reddit asked if the company was the next GameStop. “AAL majorly shorted when all the other airlines aren’t. Let’s get this bread wsb!!,” the user wrote, referring to the popular r/wallstreetbets Reddit page, before adding several rocket ship emojis. Shares in the airline ended the day 7 per cent higher.

Carson Block, a high-profile short seller, said he had significantly cut his positions. “It’s not rocket science — massively reduce your shorts or risk going out of business,” he said.

A pullback by short sellers will have added fuel to the individual share price rallies. “Right now this is like a forest fire and it will eventually burn itself out,” said Brad Lamensdorf, a long/short hedge fund trader who runs Active Alts. “Everyone who is short is getting squeezed and that will push the market to another extreme, setting us up for another correction.” 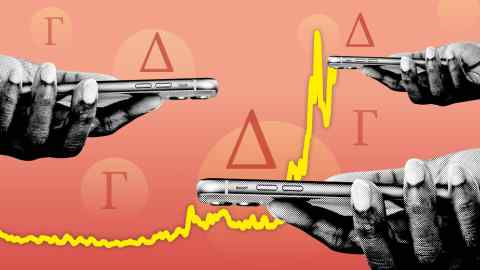 Volatility continued in overnight trading when the moderators of Wallstreetbets briefly blocked non-subscribers from accessing the page. This cause some of its most-discussed stocks to fall by as much as a third before the page returned to its previous status and share prices rebounded.

The most shorted companies on the Russell 3000 have been the index’s top performers this year, according to Bespoke Investment Group, weighing on hedge fund returns.