Russia and the US can deliver peace in Syria

For all their mutual mistrust, the two powers must find a way to work together

May 2, 2016
Jump to comments section Print this page

Last week, as President Obama entertained the White House Correspondents’ Association dinner and Britain indulged in a bizarre debate about whether Hitler was a Zionist, more than 200 people were killed in a brutal bombardment of Aleppo. The breakdown of Syria’s fragile ceasefire promises yet more suffering in a five-year long war that has killed hundreds of thousands of people and created millions of refugees.

Yet, amid all the misery, there is hope. It is possible that this year could witness two huge and positive developments. The first would be the military defeat of the jihadis of Isis, who could lose their two major strongholds in Syria — the towns of Raqqa and Deir al-Zour. The second crucial development would be the achievement of a peace deal between the Syrian regime and the non-jihadi rebels.

The key to both developments is close co-operation between Washington and Moscow. Despite the obvious tensions between Russia and the United States, their views of the Syrian conflict have been converging, laying the basis for a joint approach to defeating Isis and ending the war.

The Americans have moved furthest. Rhetorically, the US is still committed to the idea that “Assad must go”, a goal first stated by President Obama back in 2011. In practice, the rise of Isis means that the Americans’ priorities in Syria have changed. Defeating the jihadist threat is now their overriding aim. To achieve that end, the Americans are prepared to tacitly ditch the goal of “regime change” in Syria — although they are still insisting, for the moment, that President Assad himself must be removed as part of a peace settlement.

Russia’s movement is less dramatic but still important. In the early stages of their military campaign in Syria, the Russians seemed to have little interest in taking on the most radical jihadis. The Americans reckoned that only 10 to 20 per cent of Russian strikes were aimed at Isis. The rest concentrated on the other jihadi groups or the moderate opposition to the Assad regime.

This ambiguity about the war aims of the Russians is still there. Aleppo is not held by Isis but is the current target of a brutal regime offensive backed by the Russians. Nonetheless, the Obama administration believes that, in recent months, the Russians and the Syrian government have become much more serious about attacking Isis. They point to the recapture last month of the city of Palmyra, which had been occupied by Isis.

Indeed, the US now thinks it entirely possible that the Syrian regime, backed by Russian firepower, will move to retake both Raqqa and Deir-al-Zour, before the end of the year. On one level, this would be a welcome development for Washington. But it would also risk looking like a humiliation for the Obama administration, which, having assembled a 62-nation “global coalition” to defeat Isis, would have to stand by and see the Assad regime and the Russians do the job for them.

There are two ways that the Americans might handle such a situation. The first would be to concentrate US efforts on fighting Isis in Iraq, helping the government in Baghdad to retake Mosul, the largest city held by the jihadis. The second, more controversial, idea would be to lend active support to the Syrian regime and the Russians in the fight to retake Raqqa.

As things stand, it would be politically impossible for the US administration to work directly with the Assad regime and the Russians. However, if the departure of Mr Assad can be arranged, then some sort of joint military offensive against Isis involving the regime, the Russians, the Kurds and the US-led coalition might yet emerge. The Russians, it is hoped, might be willing to give up Mr Assad in return for the western recognition of their role in Syria that they have long craved. 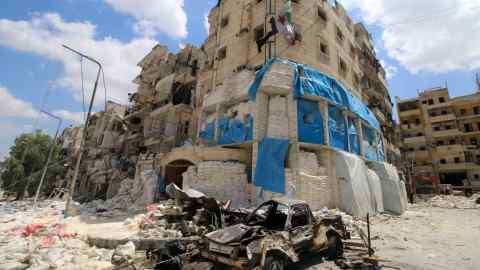 The fate of Mr Assad is the most difficult issue facing the diplomats trying to negotiate a Syria peace settlement in Geneva. But there are also many other contradictions and tensions besetting the peace talks. The Turkish and Saudi governments do not really share the Americans’ goals in Syria. The Turks’ primary obsession is defeating the Kurds, whom the Americans regard as their most capable allies in Syria. The Saudis want to see the overthrow of the Assad regime as part of their regional struggle with Iran.

It is also entirely possible that the fragile co-operation between Russia and the US in Syria could be swept to one side by other developments. Last week, there was a near confrontation between Russian and American jets over the Baltic Sea. The Nato summit in Warsaw in July could also see a further escalation of tensions between Russia and the west, as Nato presses ahead with the deployment of troops in the Baltic states and Russia stations nuclear weapons in the enclave of Kaliningrad.

It will be very hard for the Americans and Russians to compartmentalise their relations, co-operating in the Middle East as they confront each other in eastern Europe. Nonetheless, even at the height of the Ukraine crisis, Washington and Moscow did manage to work together on the Iran nuclear deal.

For all their rivalries and mutual mistrust, it is crucial that Russia and the US find a similar way to work together on bringing peace to Syria and defeating Isis. Without Russian-American co-operation, Syria can only expect further years of tragedy and death.