US probes if companies are smothering competition, as Mnuchin says Amazon ‘destroyed’ the retail industry

The US Department of Justice announced a broad antitrust investigation into the leading online platforms, raising the stakes in Washington’s scrutiny of Big Tech’s power over growing parts of the economy.

The agency said it would look into how the platforms had achieved their market power, and whether they were “engaging in practices that have reduced competition, stifled innovation or otherwise harmed consumers”.

Though it did not name the companies under investigation, the department said in a statement it would look into “widespread concerns” expressed about “search, social media and some retail services online” — suggesting that Google, Facebook and Amazon will be at the centre of the review.

On Wednesday, Steven Mnuchin, US Treasury secretary, said the investigation was tackling an “important issue”.

“I think if you look at Amazon, although there are certain benefits to it, they’ve destroyed the retail industry across the United States so there’s no question they’ve limited competition,” he said in an interview with CNBC.

Amazon said it accounts for less than 1 per cent of global retail sales, and just 4 per cent in the US. “The vast majority of retail sales — 90 per cent — still occur in brick-and-mortar stores according to the US Census Bureau,” a spokesperson said.

The DoJ move comes after the outgoing European Commission signalled it was also looking to become more aggressive in checking the market power of the largest online platform companies. A report commissioned by the EU in April recommended lowering the bar for companies deemed “dominant players”, subjecting them to stricter antitrust rules.

Donald Trump has been critical of the EU’s scrutiny of American tech groups, suggesting it should be US rather than European authorities investigating wrongdoing by the technology sector.

Tuesday’s justice department announcement came the day before what is expected to be the imposition of the largest ever penalty levied by the Federal Trade Commission, America’s other main competition authority.

The FTC is expected to announce that Facebook will pay about $5bn to settle an investigation into multiple claims that the social network misused its users’ data.

This will include allegations, first reported by The Washington Post, that the company passed on the phone numbers of users without their full knowledge, and failed to fully disclose to users how they might turn off Facebook’s facial recognition technology, according to one person familiar with the situation.

Under the terms of the deal, Facebook will be required to change how it handles and stores user data, and to be more transparent about its practices.

A few weeks ago US antitrust officials agreed to a broad carve-up in their responsibility for investigating individual tech companies, with the DoJ undertaking to study Google and Apple and the FTC looking into Facebook and Amazon.

That decision drew criticism from Mike Lee, the Republican chairman of the Senate’s antitrust subcommittee, who said dividing up the tech investigations would be “less effective and coherent” than if one agency took on the work.

David Balto, a former head of policy in the FTC’s antitrust division, said Tuesday’s announcement appeared to show that the DoJ had now taken on sole responsibility for taking on the big tech companies. The depth of expertise and experience at the justice department made it the natural agency to take the lead, he said, adding: “It would seem to be a poor use of government resources” for both agencies to be involved.

However, a person close to one of the leading tech companies cast doubt on that conclusion, and said the DoJ appeared to be carving out a new area of investigation over the head of the FTC by taking on a broad review of issues raised by tech platforms. That raised the possibility that the agencies would eventually come to different conclusions in their investigations into some of the same companies, this person said.

The DoJ’s first public declaration about the focus of its own inquiries, in a terse statement issued late on Tuesday, did not address the earlier arrangement with the FTC and left some legal experts questioning how Washington would proceed.

“I’d think there would be more co-ordination between the DoJ and the FTC,” said Carl Tobias, a law professor at the University of Richmond, Virginia, adding that it was impossible to tell whether the agencies were now “working together”.

“Without the discipline of meaningful market-based competition, digital platforms may act in ways that are not responsive to consumer demands,” Mr Delrahim said, adding that the review “will explore these important issues”.

Technology regulation
Three ways that Big Tech could be broken up 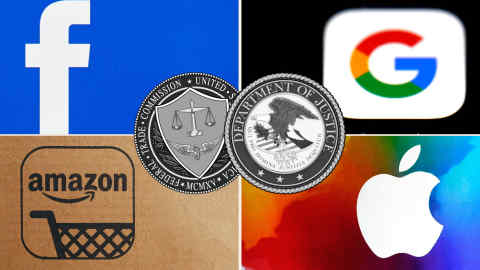 The potential conflicts of interest raised by the big tech companies — which act in some cases both as platform providers, supporting other online companies, and delivering their own competing services — has become a focus of criticism from several Democratic party hopefuls in the forthcoming presidential primaries.

Senator Elizabeth Warren from Massachusetts has led calls for the break-up of the companies, in order to turn their platforms into closely regulated utilities.

In another sign of the growing political concern in Washington, the House of Representatives judiciary committee held its first hearing into the power of the online platform companies last week. Mr Delrahim was expected to appear before the Senate judiciary committee on Tuesday to answer questions on antitrust enforcement, though the hearing was postponed.

Despite the rising political temperature and the justice department’s new inquiry, some antitrust experts cautioned any legal sanctions against the tech companies are still a long way off. “There is a tremendous distance between the concerns that are being raised and the conclusion by a court that consumers have been harmed,” said Mr Balto.

The DoJ confirmed that it has already started discussing the antitrust concerns with others, including “industry participants who have direct insight into competition in online platforms”.

Get alerts on Technology regulation when a new story is published