Visa changes, the fall in sterling and more non-EU students have cushioned the impact

Moving from Germany to the UK to study for the Masters in Analytics and Management at London Business School was an expensive, bureaucratic challenge for Alex Scheuer.

The 23-year-old had to spend £800 to obtain a student visa and hundreds more on health insurance because, following Brexit, his German citizenship no longer gave him free care through the UK’s NHS. He is still unsure whether he will look for a job in London after his degree.

“To be honest, I am not sure if I can stay here,” he says. “I opened the door to come to London, but the higher wages are not enough to offset the increased living costs compared with where I was.”

Despite all this, Scheuer has no regrets about coming to the UK and would recommend that other EU citizens do the same, at least to attend the country’s best institutions. His most likely move after graduation next August will be to return to Berlin, but the payback from studying at the London school made it worth coming to the UK, he believes.

“The LBS brand sets you up for a career wherever you go,” Scheuer says. “I made a calculation that my business salary in Germany should increase by about half, meaning that I can earn back the tuition fees I’m paying from my savings in two years.”

Brexit has had some impact on the UK business education sector — which, at the top end, punches above its weight globally — but not as great as some feared.

Changes to the UK student visa programme, lowering a barrier to international students that predated the EU referendum, as well as the drop in sterling’s value after Brexit was announced, have helped attract business students to the UK from the EU and beyond.

Postgraduate enrolments from EU countries for the 2022/23 academic year were down at 47 per cent of institutions surveyed by the Chartered Association of Business Schools (Cabs), the trade body for UK MBA providers. However, 50 per cent reported significantly higher intakes from other parts of the world this year, with a further 24 per cent reporting the same or slightly higher intakes from non-EU countries.

The latest survey of business school admission offices by the Graduate Management Admission Council concluded that growth in overseas applications to British MBAs compared with before the pandemic has largely offset a decline in domestic applications because of higher tuition fees.

The top schools, such as LBS, have benefited most. The percentage of students from EU nations at LBS’s stucco Regent’s Park campus has increased since the 2016 Brexit vote. The proportion of EU students enrolled on all LBS degrees rose from 21.1 per cent in 2021-22 to 23.4 per cent in 2022-23, according to Arnold Longboy, executive director, recruitment and admissions, at LBS. He credits, in part, the two-year graduate visa scheme introduced by the government in July 2021.

“While numbers of students from Europe have been relatively stable since Brexit, we have seen increased interest from a number of other regions,” Longboy says, noting that there has been a rise in students from India and China since 2017-18, encouraged by the more attractive visa rules. “European students have not necessarily been displaced by this growth, however. As the school has grown, we have been able to incorporate the growth [from] certain regions into the growth of some programmes.”

Masters in Finance
Can London stay a world leader in financial training? 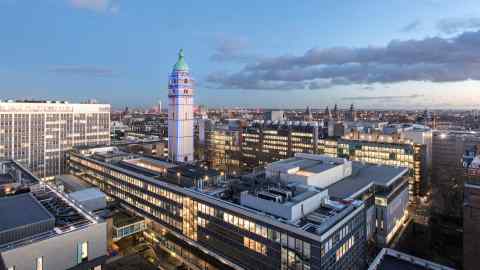 Britain’s Universities and Colleges Admissions Service reports that EU applications for UK university courses as a whole are down 53.1 per cent since 2020, and business schools, potentially, have more to lose than most institutions. Deans at UK business schools are not only concerned about student numbers but also the loss of EU benefits for MBA providers through research funding and executive education training for those in work.

There are about 30,400 business students from the EU studying in the UK, contributing £1.3bn to the country’s economy each year through course fees and off-campus spending, according to the Chartered Association of Business Schools (Cabs). Moreover, about a third of business school staff are from outside the UK and, of those, 14 per cent are from the EU, says Cabs.

Business schools in the UK received £18.2mn in research funding from EU sources in the 2020-21 academic year, about a quarter of the total. And, for the past five years, business and management research has received more funding from EU state bodies than the UK government.

“It does not feel to me like Brexit has caused an exodus either of staff or students, but neither has this been without consequences,” says Robert MacIntosh, chair of Cabs. “It is definitely harder work recruiting and retaining staff from the EU, both because of the practicalities of visas and the perceived attitudinal differences they might face, making it harder for people to progress their careers here.”

Perhaps the biggest strength of the UK’s leading schools is that, despite Brexit, culturally they remain oases for the internationally minded — both students and faculty.

“For those on the MBA jobs market, the job opportunities here haven’t changed substantially just because of Brexit,” says Kathy Harvey, associate dean for MBA and executive degrees at the University of Oxford’s Saïd Business School. “We have a very international mix and, because our students have global roles, some may be from outside the EU but are living and working there and choose to come to Oxford to study . . . We benefit from their experience”.

Brexit has created new opportunities for teaching about geopolitics and dealing with uncertainty, Harvey says. “What things like Brexit do is bring to the fore issues about the relationship between the corporate world and government.” Perspective is important, she adds: “Although we think of Brexit as being a few years down the road, it is still very early days in terms of what it will mean.”

Video: The Brexit effect: how leaving the EU hit the UK
Reuse this content (opens in new window) CommentsJump to comments section