Katrina Manson in Washington, Najmeh Bozorgmehr in Tehran and David Sheppard in London

Qassem Soleimani, the head of the Iranian Revolutionary Guards’ overseas forces, has been killed in a targeted US air strike at Baghdad airport, triggering a dramatic escalation in tensions in the region.

A US Pentagon statement accused Soleimani of “actively developing plans to attack American diplomats and service members in Iraq” and said that US forces had “at the direction of the president” taken “decisive defensive action”.

The air strike came just days after the US embassy in Iraq was attacked by Iran-backed militia. Donald Trump, the US president, had blamed Tehran for the incident and earlier this week Washington announced the deployment of 750 additional troops to the country.

Mike Pompeo, the US secretary of state, on Friday told CNN the air strike was designed to prevent an “imminent attack” on American lives in the region. He declined to provide additional details.

In a statement posted on Twitter on Friday, Mr Trump said: “General Qassem Soleimani has killed or badly wounded thousands of Americans over an extended period of time, and was plotting to kill many more . . . but got caught!”

The death of the general — who controlled Tehran’s extensive influence across the Middle East from Lebanon to Iraq, Syria and Yemen through the Revolutionary Guards’ Quds force — represents a ramping up of the conflict between the US and Iran under the Trump administration.

Diplomats have long feared that a miscalculation on either side could ignite a broader conflict across the region.

The attack prompted widespread calls for restraint from Europe and the Middle East. Anwar Gargash, the UAE minister of state for foreign affairs, said on Twitter: “Rational engagement requires a calm and unemotional approach.”

Mr Pompeo said he had spoken to his counterparts in China, the UK and Germany to reiterate the US’s “commitment to de-escalation”.

Meanwhile, in Tehran, Brigadier General Esmail Ghaani, a deputy to Soleimani, was named the new commander of the Quds force.

Ayatollah Ali Khamenei, Iran’s supreme leader, vowed to take “tough revenge” for Soleimani’s death, saying “the resistance movement will continue with double motivations”. Mohammad Javad Zarif, Iran’s foreign minister, warned the US over what he called an “extremely dangerous and a foolish escalation” in the tensions that have been building since Mr Trump entered the White House.

The Pentagon blamed Soleimani directly for “orchestrated attacks on coalition bases in Iraq over the last several months — including the attack on December 27”. He had also been accused of being the architect of proxy wars across the region engaging both the US and Tehran’s regional rivals.

Mr Trump took a hard line against Iran when he campaigned for the presidency and in 2018 withdrew the US from a multilateral nuclear pact struck to encourage Tehran to limit its nuclear programme.

Since then, the US has imposed ever more stringent sanctions on the Islamic republic to bring “maximum pressure” on its oil-dependent economy. In June, Mr Trump came close to launching a military strike on facilities run by the Revolutionary Guard — which the US designated as a terrorist organisation in April — before reversing the order.

The tension had appeared to ease in recent weeks, but in December Washington blamed Iranian-backed militia for firing a barrage of rockets at a base in Iraq that housed US troops, killing an American civilian contractor. That death triggered air strikes against Kata’ib Hizbollah, a pro-Iranian Iraqi militia, killing 25 of its fighters which in turn led to Tuesday’s retaliatory attack on the US embassy in Baghdad.

US officials in the region said they were braced for Iranian retaliation across the Middle East. “It’s one of the most consequential assassinations in the Middle East in years and will have violent and first order implications primarily for the US, Iran and Israel,” said Aaron David Miller, a former state department official at the Carnegie Endowment for International Peace.

“The so-called shadow war will intensify with terror and additional assassinations,” he added. Mr Miller said there was a risk of full-blown war between the three countries. 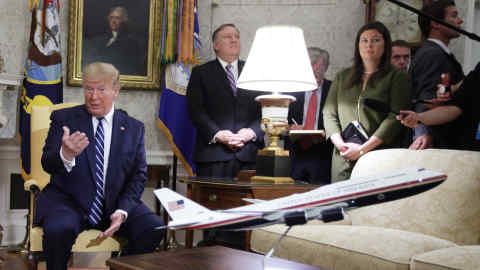 Iran’s regional rivals, in particular Saudi Arabia, have been on high alert since an attack on Saudi oilfields in September that was blamed on Iran, which caused the worst disruption to the kingdom’s oil industry in almost 90 years.

While some US Republican lawmakers celebrated Soleimani’s death, Democrats cast doubt on the legality of Mr Trump’s actions.

Joe Biden said the president had thrown “dynamite into a tinderbox” with the assassination. Mr Biden, who is leading the Democratic nomination race to challenge Mr Trump in the November presidential election, criticised the air strike as a “hugely escalatory move in an already dangerous region.”

Oil prices jumped by more than 4 per cent on the reports to reach $69.16 a barrel, as traders bet the threat to supplies from the region had increased.

Helima Croft, a former CIA analyst who heads up commodity strategy at RBC Capital Markets, said that the strikes increased risks for US oil companies such as ExxonMobil and Chevron that are active in Iraq, should Iran retaliate.

“But it is not just Iraq,” she said. “Iranians have the ability to target Americans anywhere where their proxy groups operate.”