From Symbolic & Chase to Almine Rech, here are some exhibitors to look out for

A shake-up in the selection procedure and fresh thinking at Tefaf Maastricht has seen a number of newcomers to this venerable fair. Forty of this year’s 279 exhibitors are new to Tefaf Maastricht and 14 of those are hosted in the Modern section.

Joining Almine Rech is Simon Lee Gallery, which comes to Tefaf Maastricht for the first time, having taken part in the fair’s New York edition. With historically significant works by big-name artists such as Jean-Michel Basquiat, George Condo and Pablo Picasso, the line-up includes Basquiat’s “Vincent Van Gogh in a Wax Museum in Amsterdam” (1985), a fiery portrait of the Dutch artist with piercing blue eyes and blazing red-and-yellow hair.

Sprüth Magers, an avid supporter of women artists, steps up with a single-artist show devoted to Rosemarie Trockel. The German conceptual artist rose to fame in the hothouse contemporary scene in Cologne in the 1980s, with pieces incorporating everyday materials from bronze to wool. Here, the spotlight is on her ceramics, exhibited in an elegant sandstone stand that “matches the very unique standing of Tefaf Maastricht”, says Monika Sprüth. She and co-founder Philomene Magers also hope to reach a new audience.

Though this year’s changes are concentrated in the Modern section, newcomers are cropping up across a range of genres. Sophie Jackson, director of London-based Symbolic & Chase, making its debut in the Antiques section, comments, “In a world confronting the potential apex of the art-fair formula, it’s a joy to be able to show our clients that Tefaf remains the best destination for serious collectors.”

With expertise in fine jewellery from the 19th century onwards, Symbolic & Chase is exhibiting twinkling pieces such as a 1950s Cartier diamond necklace, a pair of 1960s Cartier ear clips and an Art Deco ruby-and-diamond necklace inspired by Indian designs.

From the modern to the ancient: Kallos Gallery takes part in Tefaf Maastrich proper for the first time after testing the water last year in Showcase, a springboard-like section, open to recently established galleries. Founded by collector Baron Lorne Thyssen-Bornemisza in 2014, the gallery specialises in antiquities and ancient art: among works on show are a Greek bronze statue of Zeus, bearded and taut-bodied, and an Egyptian alabaster canopic jar engraved with hieroglyphs.

Director Madeleine Perridge comments that “Baron Thyssen and I are delighted to have the opportunity to participate and showcase our selection of exceptional ancient art alongside masterpieces from the whole history of world art.” 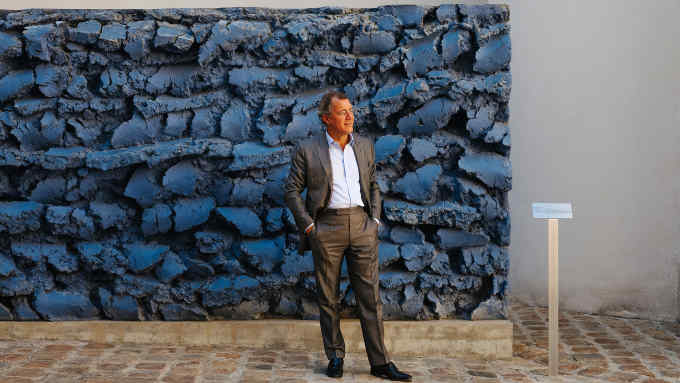