Scott Farquhar is meticulously planning his 40th birthday party when I arrive at his company’s Sydney headquarters, where hundreds of software engineers are creating products that have helped make it Australia’s most successful technology group.

“I was always an organiser,” says the co-chief executive of Atlassian, who is dressed in blue jeans and a T-shirt, like many of the group’s army of youthful staff.

“My nickname in university was ‘Skipper’ because I was often the person in charge. Of course, organising a university assignment is very different to organising a global company.”

Atlassian has enjoyed rapid growth since a 2015 Nasdaq flotation, which raised $462m to fund expansion and propelled its co-founders Mr Farquhar and Mike Cannon-Brookes on to Australia’s rich list, with the company ending its first trading day with a valuation of $5.8bn.

Since then Atlassian’s market capitalisation has soared to $37bn and its workforce almost tripled to 4,000. Its software, which helps developers and information technology teams collaborate, manage and share content, has gained popularity among global customers.

It has not been an easy journey for the two college friends, who funded their start-up in 2002 with a $10,000 credit card debt and little business experience. Atlassian’s success is even more striking given it originated in Australia, a nation better known for coal mining than coding and, unlike many tech start-ups, did not rely on early stage funding from venture capital investors to guide its expansion.

“When we started even opening a business bank account [it] was a stressful experience,” says Mr Farquhar. 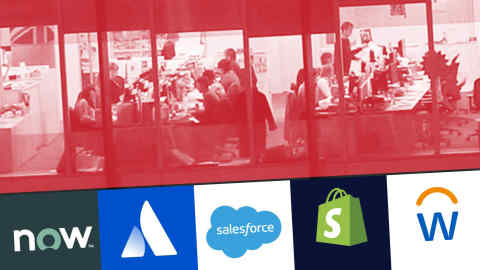 “If you think about the evolution of this company. We’ve gone from two people to about 4,000 people in 18 years. In the last two years we probably added more people than in the previous 16 years. We double every two years.”

Mr Farquhar says learning fast on the job has been critical to transforming a garage-style operation, in the early days, into a multinational with 12 offices in six countries.

“I think the only way you can cope is based on how fast a learner you are because everything I knew 18 years ago is useless today and everything I do today didn’t exist 18 years ago. I certainly didn’t know anything about leading 4,000 people.”

Mr Farquhar read voraciously in the early days to hone his leadership skills, listing books by management gurus Peter Drucker and Jim Collins, IBM’s Lou Gerstner and General Electric’s Jack Welch among his favourites. Nowadays, he listens to podcasts and finds mentors who can talk through specific business issues.

“When we were small we felt there was no one out there that could possibly mentor us because we were so different to everything else. But as you get bigger the problems of a 4,000 person organisation are very similar to other big companies,” he says.

“Now I steal from everywhere, whether it’s books, mentors or role models.”

Atlassian’s hiring policy has changed radically since the co-founders recruited its first employee — a British backpacker interviewed over a pub lunch. Nowadays, most employees undergo a rigorous recruitment methodology to ensure they will fit a corporate culture that cites teamwork and “open company, no bullshit” in its values statement.

“These days the types of problems that the world needs solved are too complicated for one individual to solve. And so we fundamentally believe that teams are the cornerstone of human achievement,” says Mr Farquhar.

The close relationship between Atlassian’s co-founders and their decision to retain 60 per cent of the company’s shares has enabled them to maintain tight control of strategy and avoid the leadership instability that can blight new listings.

“I’ve been really lucky — I have an amazing marriage on the personal side [of my life] but am also lucky to have a great partnership on the work side,” says Mr Farquhar, who credits Mr Cannon-Brookes with bringing creative flair and entrepreneurial spirit to Atlassian.

“We have similar interests and are passionate about the same stuff. We have independent but overlapping skill sets and we are at similar stages of life,” says Mr Farquhar.

In an interview with the FT last year Mr Cannon-Brookes described their relationship as really good “yin and yang”, which acted as an instant check and balance on decision-making. Their internal debates can slow decision-making but this is usually for a good reason and do not descend into fights, he said.

Having co-chief executives has a practical advantage in that each founder can divide his time between Australia and the US, where more than half the employees and most of the company’s investors are based, and Europe, where Atlassian makes 40 per cent of its sales.

Atlassian’s decision to move its domicile from Australia to the UK in 2014 to prepare for a Nasdaq listing attracted some criticism in the local media, which questioned why the group was bypassing the Australian Securities Exchange.

Mr Farquhar says this move was necessary to reflect the global thinking that has been core to Atlassian’s success and that can help realise its ambition to emulate the long-term success of technology groups, such as Microsoft and Google. “We have a global pool for customers, a global pool of talent that we source people from and we chose the best stock exchange in the world, where we got access to the best informed investors,” he says.

Other strategies that have helped to keep Atlassian on its growth path include setting “big, hairy, audacious goals”, hiring the right people and learning to delegate to ensure only the tough decisions chew up leadership time.

“I’ve got better at delegating over time. You only get 168 hours a week and it is about making sure they are spent on the highest impact activities. Only the really tough decisions should get to my level,” he says.

I recently read a book about Ernest Shackleton, the explorer who led expeditions to Antarctica. He didn’t reach his objective but he crossed thousands of miles of ocean and got every one of his people home. That is a great example of leadership.

What would you do if you weren’t co-chief executive of Atlassian?

If I got fired tomorrow I’d probably go travelling around the world with my family. If you said I could never have started Atlassian in the first place and I had to find a different career. I’d probably still be in software somewhere, because I love creating things, and I love to have an impact in the world.

One of my scout leaders when I was really young had a special skill that when he got angry or upset with a group of scouts, instead of yelling he would go quiet. It sort of had this calming effect on the group of loud boys, and myself included, who would then sit down and shut up. He was also very good at explaining the consequences to us when we did something wrong. I think that is a good lesson in business. Unless people understand the consequences of what they’re doing wrong they will never do it well.