Why we’re all falling for marriage cupboards

Visitors to the Masterpiece London Art Fair this year were treated to an enlightening lesson in the connection between courtship and cabinetry. It came courtesy of Robert Young Antiques in the form of a marriage cupboard – a piece of folk art furniture once commissioned by the family of a betrothed couple as part of a dowry. First discovered in Scandinavia, and dating to 1827, its variegated pale-blue ground is festooned with tulips, ribbons and eternal-soul motifs. It’s living proof of the timeless allure of artisanal, handpainted decoration, and a poignant memento from a long and uninterrupted practice that populated alpine and rural homes across central and eastern Europe from the late Renaissance.

“Marriage cupboards are terribly happy things,” says Robert Young, who has dealt in fine antique marriage boxes, cupboards and armoires since the late 1970s. “They’re so festive and joyful, and a great expression of folk art traditions.” Simple in form and made from well seasoned and plentiful pine, they were typically inscribed with the newlyweds’ names, the date of their union and other regional designs that reflected the tastes of the day. Young has four for sale including two with jigsaw and floral motifs, hailing from the Austrian Empire and dating from 1825 and 1831.

“Often you can identify the town where the piece was made from the style of the decoration,” says Warwick-based John Cornall, who has been selling antique folk and country furniture for more than 20 years. During its golden age from the late 1700s to the mid-1800s, there would have been hundreds of workshops across the Austro-Hungarian Empire and Scandinavia crafting marriage furniture.

The genre is increasingly finding new audiences among art buyers. At one time, Cornall would sell only a few pieces a year, but as homes have shifted from minimalism toward bolder, more colourful schemes – call it the Charleston effect – there’s a more constant demand. “The more our digital age moves away from authentic cultures, the more appreciative people have become of objects from this world of soul and spirit,” he says.

Similarly, as younger, more affluent buyers from former Soviet Bloc cities begin to see value in what was once derided as “peasant furniture”, fewer pieces of quality are available; and there are strict export controls in countries including Poland and Norway. As a result, prices are only going one way. His current inventory includes an early-20th-century Transylvanian chest painted with red birds, “echoing the folk costume of the area”, and priced at £950.

Like an artwork, but far more useful, marriage cupboards are “a beautiful way to hide ugly things”, says Alexandra Tolstoy, who has been collecting similar painted pieces since her teens. One Swedish painted armoire is a repository for box files and papers – and perfectly coordinates with the “Pimlico green” paint of her dining room walls. Tolstoy is also selling a pink and blue early-19th-century cupboard with door panels painted with flowers and birds (£2,850) and an olive and rust-coloured cupboard painted with flowers and vines (£2,650) via The Tolstoy Edit.

“They’re very much in tune with my aesthetic,” adds Martina Mondadori, editor of Cabana magazine, who spent childhood holidays in the Dolomites and inherited an early-19th-century Austrian marriage chest from her father. Beautifully painted in deep greens and reds, it sits in the entryway of her Milanese apartment, where it dictated the rich ruby-hued decor. She picked up a similar chest in Parma. “They’re an expression of the cross-pollination of decorative motifs that moved between Europe, the Ottoman Empire and the Mediterranean,” she explains. The tradition was similarly transplanted from northern Europe to America in the 18th century in the form of the Pennsylvania Dutch style.

Aside from the occasional ski chalet, most marriage furniture now lives in urban homes. Robert Young’s buyers place them in modern interiors of glass and open brick where they lend a blast of art and colour. Collectors will spend up to £15,000 depending on the condition, colour, rarity and scale of a piece. But it’s worth noting that Cornall warns against buying any piece with a lingering smell of fresh paint, which can be a sign of over-restoration.

HTSI
All the world’s a (miniature) stage 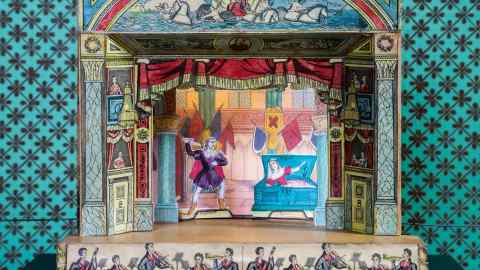 “There’s a real freshness to the painting you see in folk-art marriage furniture,” says longtime admirer Annie Sloan, the British artist and author whose first chalk-paint collection, released in 1990, was inspired by the tones of Scandinavian examples. “It has happily come full circle – people are only now opening up to its power and free-flowing expressiveness.”