Accept & continue
Manage cookies
How To Spend It Food & Drink

The latest opening from the Big Mamma team serves a campy mash-up of Catholic iconography, Super Mario and The Sopranos. But does the food deliver?

Fun is not overrated. But other than the kind to be found scrolling through kitten videos on YouTube (not inconsiderable, it turns out), it’s been in pretty short supply lately. The opening at the end of June of a new London restaurant from the Big Mamma group is reason to cheer. Helmed by two Frenchmen, Victor Lugger and Tigrane Seydoux, the group looks after eight restaurants in Paris, including the 4,500 sq m food market La Felicità, plus venues in Lille, Lyon and Bordeaux. Last year, it opened its first site in Madrid, to be followed this summer by its second.

In London, Big Mamma is responsible for the insanely popular Gloria in Shoreditch and Circolo Popolare in Fitzrovia, both of which opened in 2019 and could best be described as old-school Italian trattorias on steroids. They trade in kitschy interiors and pun-laden menus, full of cheesy, comforting pastas and pizzas, chocolate-dusted tiramisu and an extravagant quiff of a lemon pie, rounded off with complimentary shots of the house limoncello.

The latest incarnation, opening on 2 July, occupies an impressive 7,000 sq ft site in Covent Garden. When I met Lugger for a tasting in late spring, the location was still a building site. But from detailed plans he showed me, I could tell the 295-cover restaurant would be at once more classically grand than its predecessors and deliver on the Insta-tastic interiors we’ve come to expect.

The place is called Ave Mario, which led me to imagine, not entirely inaccurately, Catholic iconography or something to do with Super Mario Bros. When I asked how the name relates, Lugger demurred: “Not much, because we’re not building a church, we’re building a restaurant.” The name, he said, just made him laugh. A lot of the design seems to follow the same whimsy.

The walls in the skylit dining room are striped green and white in homage to the façade and interiors of the cathedrals in Florence and Siena. The banquettes are cardinal-red, the tables draped in white tablecloths. Arched mirrors along the sides gleam with illustrations of dishes outlined in bright neon (something Lugger spotted in an Italian deli). In another section, the walls are covered in green ticking fabric, onto which the team plans to pin ephemera to create an ever-evolving collage. “It’s going to live,” Lugger told me. The idea came from Lugger’s wife’s grandmother’s house in Saint-Étienne, where the walls of one corridor flutter with 40 years’ worth of photographs and mementoes.

Downstairs, a second “crazy” dining room looks like something out of Mad Men with 1950s Eero Saarinen chairs and 1960s swirling carpet, while the loos bring to mind 1980s Miami or a gay Mafioso’s fever dream with fluffy curtains, candy-stripe floors and headshots of Sopranos characters on the front of every cubicle. Why The Sopranos? “I’m glad you asked,” Lugger said. “There is no reason, it doesn’t mean anything.” It’s a campy mash-up of references that will probably mesh together perfectly on social media.

Lugger takes pride in the breadth of patrons that come to his London restaurants (from hipsters to foodies to billionaires, as he puts it), but the new restaurant makes a bid for the higher end (or at least big-spending) customer with a few conspicuously upscale dishes. While there are still plenty of affordable options (antipasti from £6, pasta and pizza from £12, secondi from £14), these premium plates include three topped with Baeri Italian caviar: baby pizza with crème fraîche (£18), piadina romagnole tacos and langoustine (£20), and frico friulano tortilla (£16). 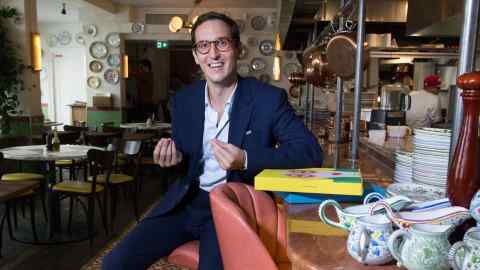 The plates I tasted didn’t all reach the highest levels of gastronomy, but I was won over by the pizza margherita, which uses a “biga” (dry, yeasty) dough for a crisper base, topped with tangy San Marzano tomato and basil. The ravioli carbonara was also memorable, the taste equivalent of breaking into a sunny-side-up egg, having the yolk ooze over your plate, raking your rasher of bacon through, and spooning up the gooey mess with lots of cheese. I got three palm-sized discs of pasta but the kitchen was working on a version with one giant raviolo the size of a small frisbee.

The dish that really summed it up for me, though, was the 60cm-high tower of stracciatella ice-cream cake that required a couple of members of staff to manoeuvre over to the table. Generous portions were scooped out and drenched in chocolate. It was such an Ethel Merman showstopper of a dish that I couldn’t help but be won over. Now we can all eat out again, isn’t that the kind of irresistibly feel-good treat we deserve?