Known for creating seven-foot bronze penises, the artist-designer duo’s recent work is less about sex and more about the natural world

Ever since the Haas Brothers brought their finely crafted furry monsters to the Design Miami fair in 2013, their work — which plays across the boundaries of art and design — has attracted attention, plaudits and occasional disapproval.

Performative and perverse, their long-haired animalesque objects, wearing skins from Icelandic sheep and chocolate-brown goats, looked set to scuttle off the booth and out of the fair on their intricately detailed, cast bronze hooves. Some you could indeed sit on, but the function of these part-silly, part-sinisterly lecherous beasts, with their lolling, polished tongues, seemed to be entertainment first, with the piquancy of puzzlement rushing in afterwards.

Since then, Nikolai (Niki) and Simon Haas have added to their fantasy world. There are brightly beaded animals, created with women in South African townships; standard lamps in the form of Socotra plants, sprouting crystal leaves; ceramics that mimic fungal growths found in nature, thanks to the painstaking application of wet, highly worked clay; and seven-foot penises cast in bronze with glowing lightbulbs in their tips. Along with the furry beasts, some of these — including the lamps, ceramics and beadwork animals — can be found in Ferngully, an exhibition of their work at the Bass Museum in Miami, which opened this week. Their first solo show in a public museum, it is, in essence, a retrospective — albeit of a brief career subjected to a very tight edit.

The ascent of these non-identical 34-year-old twins has been rapid: collectors are keen to buy into their realm of highly crafted playful objets. One such collector, the Miami-based George Lindemann Jr, has acquired some works and commissioned a few more, including bespoke cutlery with handles culminating in creepy four-fingered hands, and a gold water pitcher encrusted with semi-precious stones. Lindemann Jr, who is president of the Bass Museum’s board of trustees, says their work suggests another world.

Born in Austin, Texas, the pair have made Los Angeles their home. Their studio is in a vast warehouse near Downtown, set up for spontaneous acts of making in wood, wax, stone, metal, resin and ceramics. An early backer of their work was Leonardo DiCaprio, a close friend of their older brother, the actor Lukas Haas. Another actor, Tobey Maguire, set them on their way, commissioning a number of pieces in 2010. And they used to be in a band with the actor Vincent Gallo. It’s appropriate, then, that many of the names of their pieces are giggly celebrity references, from “Mary Tyler Spore” (a glass bead and bronze mushroom) to “Uma Worm-an” (a long skinny multi-pede chaise).

Lynda Resnick, the LA-based pomegranate magnate, is a mentor to the brothers. She sent them to Lost Hills, in a work-poor agricultural region of central California, to teach local women beading and other craft skills, and the brothers now provide them with regular employment and a fair income.

The Haas Brothers have used the freedom and security provided by their Hollwood connections to make a body of work that’s risk-taking in terms of aesthetics, narrative and material experimentation — a mish-mash of cartoons, sex and the natural world, wrought in high-craft materials and newly devised resins and weaves.

“Niki does animals and personalities,” says Simon Haas. “I’m on the more analytical side.” The sense of shame he felt growing up gay in Texas informs the more sexual works. “We wanted to get the conversation started,” he says.

If the furry beasts at Design Miami represented how life seemed back in 2013 — “funny and scary and wild and untamed,” according to Niki — the deep purple walls and velveteen cacti (from 2018) in the second room at the Bass are perhaps a clue to their current lives. Niki is now married with a one-year old child; and Simon, who is open about his past addictions, is two years sober. The natural world has overtaken sex in their more mature minds. Their latest work includes palm trees with trunks made of woven parachute cord, heavy with bunches of beaded dates and crowned with delicate copper fronds that recall Joshua trees. A thickly beaded chaise, curving like an ample woman, is sensual and fecund and makes more than a nod to another Niki, the artist Niki de Saint Phalle.

While the twins declare themselves “stoked” to be showing in a museum, The Bass’s uninviting ground floor galleries don’t do the work many favours, with their badly proportioned spaces, dull oak floors and dominating safety features. But across the foyer is another space selling a limited-edition range of the brothers’ work. In this room — carpeted in lichen green and with a ceiling masked with gleaming pink tinsel — the riotous array of clasped-hand napkin rings, leopard print pots with horns and lizardy legs, and vases covered with mould-like speckling looked right at home. 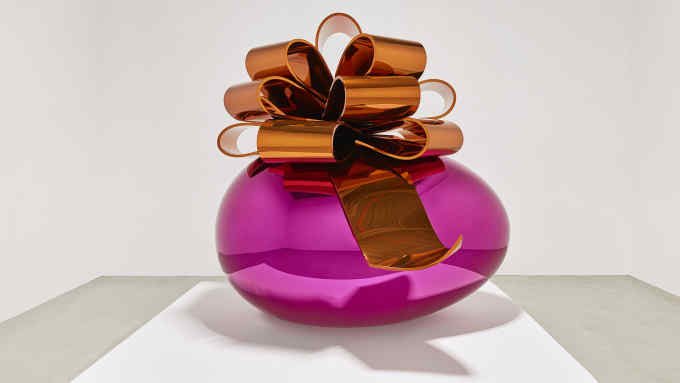