While textile sweatshops have long been under the spotlight, the world has more recently awakened to another form of industrial abuse: seafood slavery.

The global fishing industry has been tainted by reports of workers held against their will, working for months on boats in 20-hour shifts and being beaten or even killed.

Such reports have highlighted the tension common in several sectors of the food sector — delivering cheap food and controlling costs while preserving good practice.

For the companies buying seafood to satisfy consumer demand, the challenge is to eradicate such abuses from a supply chain that is opaque and highly fragmented.

However, while the task of monitoring conditions in the industry looks daunting, a range of tools and technologies are making it easier for companies to lower the risk of abuse.

The seafood supply chain is complex. It involves transshipments, processing facilities (owned by seafood brands or operated independently) and armies of brokers and other intermediaries.

“It’s very difficult to have oversight of what goes,” says Ed Marcum, managing director of Humanity United, a human rights-focused foundation. “You don’t have competent systems that tell you who’s at sea or who the workers are — and often they are migrant labourers who’ve had their passports taken.”

Pressure on companies to remove abuse from seafood supply chains has risen in recent years. Growing numbers have accepted that tackling environmental and social problems in their supply chains is part of managing risk and being a responsible business.

Meanwhile, regulations on modern slavery have been tightening around the world. The UK’s Modern Slavery Act, passed in 2015, requires companies doing business in the UK with more than £36m in turnover to report publicly on their efforts to ensure there is no forced labour in their supply chains.

This year, the Australian government established a requirement for large businesses to report annually on actions to address modern slavery risks in their operations and supply chains.

Mr Marcum argues that these and similar regulations have prompted companies to monitor supply chains in sectors such as seafood. “It’s had a catalytic impact,” he says. “It forces companies to put this on the radar.”

Meanwhile, when it comes to the practicalities of tracking seafood products on their journey to the consumer’s table, some argue that models are in place that could be more widely applied.

“With seafood, unlike other sectors, there are already information systems for safety because it’s such a perishable item and it’s a luxury item,” says Katrina Nakamura, founder of the Sustainability Incubator. Its Labor Safe Screen tool is designed to help seafood companies identify and reduce the risk of slavery in their supply chains.

Similarly, measures to reduce environmental damage by the fishing industry have led to work by organisations such as the Marine Stewardship Council to develop certification and labelling programmes that identify products sourced from sustainable fisheries or processors. These could be more broadly applied.

This has been the experience of Pew Charitable Trusts, a US organisation campaigning for conservation, which estimates that 20 per cent of all wild fish caught each year globally — worth up to $23.5bn — is harvested illegally.

Its Ending Illegal Fishing Project was originally launched with an exclusively environmental focus but has expanded its remit.

“It became clear that a lot of the tools we advocate for and that companies can use on the environmental side are also relevant to human rights, safety and decent working conditions,” says Courtney Farthing, senior associate of the project.

Technological advances could make it easier for companies to monitor their seafood supply chains. For example, blockchain can capture data on provenance and chain of custody.

Even simple devices such as a mobile phone can help, by allowing workers to send anonymous texts on health and safety risks or instances of abuse in their workplaces.

“Technology helps make tracking and transparency much more affordable and do-able,” says Peter Horn, project director of the Ending Illegal Fishing Project. “It means you don’t need so many people in your workforce to track the vessels and share the information.”

Through its Working Capital venture fund, Humanity United is investing in start-ups that are developing tracking technologies. Mr Marcum, its managing director, cites San Francisco-based Phylagen, which is developing environmental microbiomes, as an example. The project aims to create a unique marker in the make-up of bacteria, fungi, algae and viruses, as a means of identifying the provenance of a product.

Mr Marcum sees such technologies as key tools for companies as pressure grows for the seafood sector and others to account for the sources of what they purchase from suppliers.

“Shockingly, now, there’s limited knowledge on where the inputs to your products come from,” he says. “That’s going to change radically in the next five to 10 years. There’s going to be an expectation that you know where these things come from.” 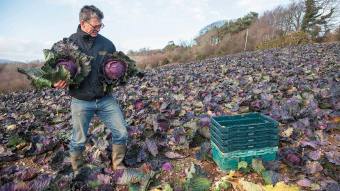