Orban handed power to rule by decree in Hungary

We’ll send you a myFT Daily Digest email rounding up the latest Hungary news every morning.

Hungary’s parliament approved on Monday a controversial bill that will extend the state of emergency declared this month and allow premier Viktor Orban to govern by decree for an indefinite period of time.

The bill, which Mr Orban’s Fidesz-led government said was necessary to stem the spread of coronavirus (Hungary has almost 450 cases), also criminalises obstruction of official efforts to combat the pandemic. Under its provisions, intentionally spreading false information about the virus will be punishable by a prison sentence of up to five years.

Since Mr Orban returned to power in 2010, his government has steadily eroded checks and balances in the judiciary and cemented its control over much of the media. The new law gives the government an indefinite right to rule by decree. Although that right can, in principle, be withdrawn by parliament, Mr Orban enjoys a two-thirds supermajority there. The Constitutional Court, which critics say is packed with Fidesz loyalists, has the power to assess the legality of government’s decrees.

“This law is about dropping all pretences,” said Zselyke Csaky of Freedom House, an independent American democracy watchdog.

“It reveals what has been the case for some time: that there are practically no checks on the government’s power because neither the parliament nor the Constitutional Court serve as an efficient check.”

However, Mr Orban insisted after the vote that the new law “poses no threat to democracy” in Hungary. This came after justice minister Judit Varga told foreign journalists on Friday that since both parliament and the constitutional court have the ability to revoke it, the state of emergency will not be “indefinite”. She criticised western media for using that word.

While the state of emergency is in effect, parliament will still meet, but it can only discuss matters related to the coronavirus pandemic. All by-elections and referendums have been suspended.

Officials in Brussels, international organisations and local civil society groups have complained that the bill lacks a sunset clause.

European justice commissioner Didier Reynders said he would seek an official assessment of whether the new law was in line with EU standards.

Hungary
Hungary’s Viktor Orban and the rewriting of history 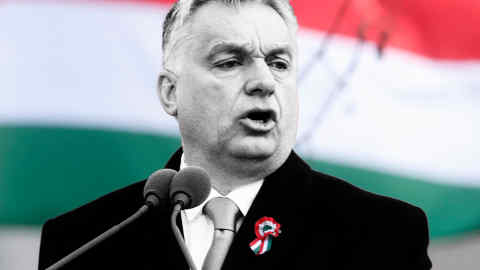 Ahead of the vote, Marija Pejcinovic Buric, secretary-general of the Council of Europe, wrote to Mr Orban: “An indefinite and uncontrolled state of emergency cannot guarantee that the basic principles of democracy will be observed and that the emergency measures restricting fundamental human rights are strictly proportionate to the threat which they are supposed to counter.”

The Hungarian government has dismissed these criticisms as politically motivated. Meanwhile, some observers say that a strong response from Brussels will send an important message to other member states tempted to take advantage of the pandemic.

Andras Racz, a senior fellow at the German Council on Foreign Relations, wrote in a recent paper about the Hungarian law: “Budapest’s policies might be a signal to other national governments that political exploitation of the coronavirus crisis to introduce restrictions to fundamental political freedoms is possible.”

Hungary’s Covid-19 measures are consistent with those of other EU states / From Beáta Margitay-Becht, Acting Head of Mission, Embassy of Hungary in the UK

Get alerts on Hungary when a new story is published