An investor group led by Apollo Global Management and Elliott Management plans to abandon a transaction to refinance the US oil and gas driller EP Energy in the wake of the commodity price rout in the past 10 days, according to two sources familiar with the matter.

Apollo, Elliott and two other investors — Avenue Capital and Len Blavatnik’s Access Industries — had committed $463m to fund EP Energy's exit from Chapter 11 bankruptcy in a plan confirmed earlier this month after a contentious, multi-day bankruptcy court hearing in Houston.

The collapse of the restructuring is an early sign of the financial fallout from the slide in oil prices that followed the March 7 break-up of an alliance between Saudi Arabia and Russia. The two countries had previously agreed to hold down production but disagreed over further cuts to counter the hit to demand from the coronavirus pandemic.

The US oil benchmark WTI crude has fallen to under $30 a barrel from above $40 as the EP Energy plan was confirmed 10 days ago — the day before the price war began.

EP Energy, whose drilling activities are focused on Texas and Utah, had been acquired by an investor group led by Apollo in 2012 for $7.2bn. The heavily-indebted company had struggled after oil and gas prices softened again in 2019 forcing the group to file for bankruptcy in October. Apollo and Elliott had accumulated large positions in the company’s junior bonds. The restructuring plan called for the company to eliminate $3.3bn of existing debt and reset the company’s enterprise value at $2.5bn. 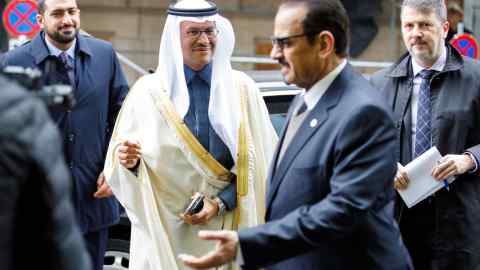 The centrepiece of the restructuring was a so-called backstop agreement where Apollo, Elliott and their partners would commit to contributing $325m of cash and another $138m of debt holdings to the new company. The four groups, among the world’s canniest distressed debt investors, would acquire EP’s new equity at a 35 per cent discount to fair value.

Apollo, Elliott and Avenue declined to comment on the decision to walk away, which was first reported by The Wall Street Journal. Access Industries could not be immediately reached.

An irony of the collapse of the deal is that the risk of a falling oil price was hotly debated in bankruptcy court. Judge Marvin Isgur had asked the company, along with creditors who opposed the Apollo-Elliott deal, to explain how falling prices in the wake of the coronavirus outbreak would impact the feasibility of a restructuring whose terms had been hashed out in late 2019.

EP Energy’s expert witness, Avinash D’Souza of Evercore, in a declaration submitted to the court on March 3, wrote: “The available evidence indicates that Covid-19 will have only a short-term negative impact, and, as such, does not change my view as to the feasibility of the plan.”

Some senior EP Energy bondholders had argued in the confirmation hearing that the restructuring plan was not feasible because their debt would not be able to be refinanced in advance of its maturity in 2026, as the plan envisaged, particularly if oil prices came under pressure. The $1bn-worth of senior bonds, which had been trading about 65 cents on the dollar in mid-February, were quoted at just 21 cents on Monday, according to Trace.