Winter storms and the fear of the spread of coronavirus hit high street retailers and travel agencies in February, hampering the post-election recovery of the UK retail sector ahead of the Budget on Wednesday.

Sales in department stores contracted 3.6 per cent in February compared to the same month last year, while spending in restaurants fell 6.4 per cent, according to data from payments company Barclaycard.

“Storms, floods and fears about the spread of coronavirus have kept many Brits away from the high street this month,” said Esme Harwood, director at Barclaycard.

More than one in four people avoided the high street and other busy places amid fears of catching coronavirus, according to a survey by Longitude Research on behalf of Barclaycard.

News in Focus podcast15 min listen
Will coronavirus cause a global recession?

Overall spending rose 2.2 per cent in February, helped by 12.4 growth in digital subscriptions such as online streaming services, but this is slower than the 3.9 per cent recorded the previous month.

The company claims it tracks nearly half of the nation’s credit and debit card transactions. The analysis covered the four weeks to February 21, which marked the start of the surge in coronavirus cases in Europe after about a month of the health emergency in China.

The sector’s slowdown was confirmed by the British Retail Consortium in collaboration with advisory firm KPMG. Their data, also released on Tuesday, showed the value of retail sales rising only 0.1 per cent in February compared to the same month last year, down from a 0.4 per cent increase in January and lower than the 3.2 per cent in February last year. 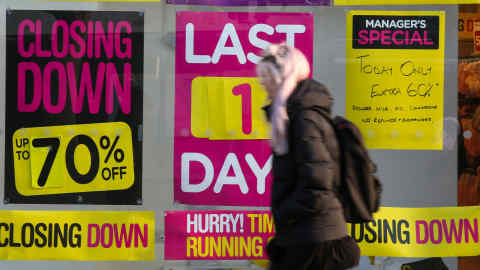 “Clouds continued to hang over the retail industry in February as storms Ciara, Dennis and Jorge took their toll on retail sales,” said Helen Dickinson, BRC chief executive. At the end of the month there was “a slight rise in spending on food and healthcare as a result of concerns around coronavirus,” she added.

In-store non-food sales were the worst performing sector, with a 1.8 contraction in the three months to February compared to the same time last year, while spending on food was up 0.3 per cent.

Instead, non-food online sales expanded healthy at 3.6 per cent in February, higher than the 12-month average of 2.9 per cent.

“February saw the UK get hit by one storm after another, so it’s unsurprising that online fared fractionally better than the high street,” said Paul Martin, UK head of retail at KPMG. “Generally though, demand for non-food items remains woefully low.”