The largest laboratory company in the US has warned it will be impossible to increase coronavirus testing capacity to cope with a surge in demand during the autumn flu season, in a sign that crippling delays will continue to hamper the American response to the pandemic.

The stark warning comes as the country struggles to tackle a resurgence of the disease, especially in sunbelt states like California, Texas and Florida, even as some countries in Europe and Asia have had some success in taming the virus.

Long delays in processing test results — which are taking more than a week to return — are exacerbating the situation and the time lag is expected to worsen in the autumn, when millions of Americans catch common colds and the flu.

“There is no way that PCR capacity is going to double in the next three months,” said James Davis, an executive vice-president at Quest Diagnostics, in an interview with the Financial Times, referring to nasal swab tests that use polymerase chain reaction technology.

Mr Davis said “other solutions need to be found” to detect positive patients in addition to nasal swab tests.

The US has just 4 per cent of the world’s population, but accounts for roughly a quarter of confirmed cases and deaths. More than 140,000 Americans have died from the disease, according to Johns Hopkins University.

Mr Davis’s comments come as testing companies including Quest and its main rival LabCorp are already struggling to keep up with demand at a time when 5.5m tests are being conducted each week because of the spike in cases. Both companies are reporting delays of about a week in getting results to people.

Such a long delay renders testing virtually pointless, according to public health experts, because by the time a person receives their result they are likely to have passed the point at which they are most infectious.

Tom Frieden, the former director of the US Centers for Disease Control and Prevention between 2009 and 2017, told the FT: “These tests are essentially a little or even no value if they come back within that kind of a timeframe.”

Long delays in getting results mean that the number of nationwide cases — which hit a record of almost 464,000 last week — is out-of-date, and that US officials must fight the pandemic with old data.

Dr Frieden said the delays in reporting test results were contributing to a “scarcity of information”, with most states failing to report essential coronavirus data

“It’s very hard for any person in the US to know what their individual risk is, and to know how well their government is doing at reducing that risk,” he added.

Public health experts said the US needs to double its testing capacity to cope with a jump in demand following the surge of infections in states that reopened too quickly, including California, Texas, Florida and Arizona.

Right now with demand greater than supply, we should focus on the people that are symptomatic

Demand is likely to increase further in the autumn and winter when millions of Americans with common colds and the flu are expected to line up for tests to eliminate the possibility they have the virus.

Dr Jonathan Quick, head of pandemic response at the Rockefeller Foundation, said: “You have 50m to 100m Americans a year getting the sniffles and, given the impact of Covid versus flu, you’re going to want to distinguish between the two. That’s going to be a huge challenge.”

Mr Davis said his company would be able to expand quickly were it not for a shortage of chemical reagents and machines from testing equipment makers such as Roche, ThermoFisher and Hologic, which are struggling to keep up with global demand.

He added: “We would double our capacity tomorrow . . . but it’s not the labs that are the bottleneck. [It] is our ability to get physical machines and, more importantly, our ability to feed those machines with chemical reagents.”

Quest is running its laboratories 24 hours a day but there are “more specimens coming in every day than our capacity can handle”, said Mr Davis.

The surge in demand in states in the south and west has been exacerbated by attempts to expand access to testing in places that have managed to tame the virus, but which see mass surveillance as an essential tool to prevent the virus from resurging. In New York everyone is eligible for testing regardless of whether they have symptoms.

Mr Davis warned that testing might need to be rationed to ensure that those with the most urgent need receive their results more quickly.

“When this pandemic first started in March, and the rest of the country was not yet infected, we were able to export specimens out of the New York-New Jersey area to other labs, so the turnround was very good. But now we can’t in good conscience send specimens from New York and New Jersey to Florida, Texas, Arizona, Kansas and California, because of the positivity rate. Demand in those regions has increased threefold.”

Mr Davis said that Quest, which charges $100 per test, had “no lack of moral or economic imperative to do more testing”, suggesting extra government funding to expand PCR capacity will not solve the problem.

Instead, academic institutions and the industry needed to find new solutions to the testing crunch. A blood test that detects a type of antibody produced in the early stages of the disease could help spot positive patients, he said.

Mr Davis also pointed to pooled testing — which allows labs to test several specimens at the same time — as a way of speeding up processing times. On Saturday, the US Food and Drug Administration said it would allow Quest to conduct pooled testing. 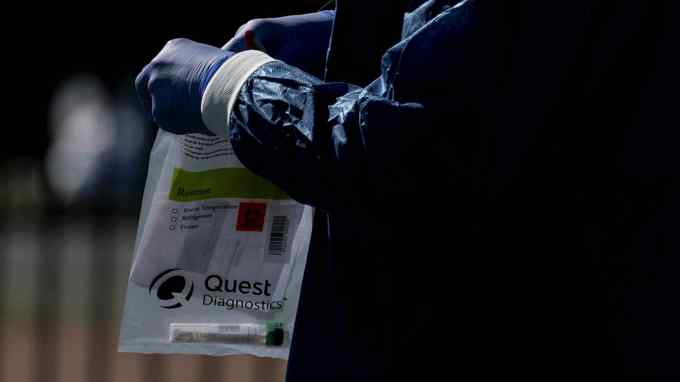