John Reed in Bangkok and Jonathan Eley in London

Tesco has agreed to sell its south-east Asian operations to Thai conglomerate Charoen Pokphand for $10.6bn in cash, taking another big step back from its international expansion and setting the stage for a lavish return of cash to investors.

The UK’s largest supermarket chain on Monday announced the proposed deal, which is Asia’s largest corporate acquisition in the year to date and the biggest in Thailand’s history. In a stock exchange statement, Tesco said the sale would return about £5bn to shareholders via a special dividend, and pay £2.5bn into its defined-benefit pension schemes to eliminate their deficits.

“Following inbound interest and a detailed strategic review of all options, we are announcing today the proposed sale of Tesco Thailand and Tesco Malaysia,” Dave Lewis, Tesco’s chief executive said. “This sale releases material value and allows us to further simplify and focus the business, as well as to return significant value to shareholders.”

Tesco and its advisers held meetings in London with interested parties last week, and the company’s board met over the weekend to discuss the deal.

CP faced competing bids from two rival Sino-Thai family-controlled conglomerates, Central Group and TCC Group. Central, Thailand’s biggest department store operator, made an offer of just over $9bn, according to people close to the deal, and TCC recently raised a $10bn two-year loan to finance its bid, according to Bloomberg.

For Tesco, selling its nearly 2,000 stores in Thailand and 74 in Malaysia marks the final stage of the UK retailer’s exit from Asia. Tesco sold its South Korean HomePlus business in 2015.

Last month Tesco said it would sell its 20 per cent stake in Gain Land to China Resources, its joint venture partner, in effect unwinding a largely unsuccessful foray into China.

The company retains a significant central European operation with stores in Hungary, the Czech Republic, Slovakia and Poland. Mr Lewis said the sale would “simplify the Tesco Group” and allow it to focus on the UK, Ireland and central Europe.

In the UK, Tesco has recovered strongly after an accounting scandal in 2014 and a sustained assault on its market share from German-owned discounters Aldi and Lidl.

Tesco’s share price was flat on Monday morning, making it the best performer on the benchmark FTSE 100, which tumbled 7 per cent following a plunge in oil prices.

Clive Black, an analyst at Shore Capital, said the deal was priced at the upper end of expectations and marked another stage in Tesco’s evolution into “a cash compounding stock” with a high and sustainable free cash flow yield.

Both he and James Grzinic at Jefferies predicted that Tesco’s central European operations could well be marketed for sale in the coming months, returning the group to a pure UK and Ireland business.

Along with the special dividend, which Mr Black expects to be about 51p a share, Tesco also nudged down its forecasts for capital spending and leverage. It now expects to keep total debt — including lease obligations — at about 2.5 times earnings before interest, tax, depreciation and amortisation.

The Thai and Malaysian operations generated revenues of just under £5bn last year, around a tenth of the sales produced by the core UK and Ireland operation. But superior margins meant their contribution to group profit was proportionately greater.

Tesco’s strengthened balance sheet will give it renewed flexibility to compete on price with rivals. Last week it price-matched discounter Aldi on several hundred staple items, signalling increased confidence that it can use its scale to win back shoppers from limited-range supermarkets.

Mr Grzinic also said that the transaction was a useful reminder of the supermarket group’s defensive qualities amid the mounting coronavirus panic. “A broader UK and European contagion would likely prove incrementally positive for Tesco’s earnings prospects,” he said, as expenditure switched away from pubs and restaurants towards eating at home.

For CP, winning the deal is a symbolic triumph for family patriarch Dhanin Chearavanont, who sold control of its Lotus supermarket group to Tesco for $180m in 1998 during the Asian financial crisis, and has repeatedly said he wanted to buy it back.

However, the deal is subject to approval by Tesco shareholders and regulatory review by Thai authorities. CP already operates more than 10,000 7-Eleven convenience stores in Thailand as well as the country’s biggest cash and carry chain Siam Makro.

Sakon Varanyuwatana, chairman of Thailand’s Office of Trade Competition Commission, told the Financial Times in January that his office was prepared to exercise its power to block any proposed deal if it were to create a monopoly. 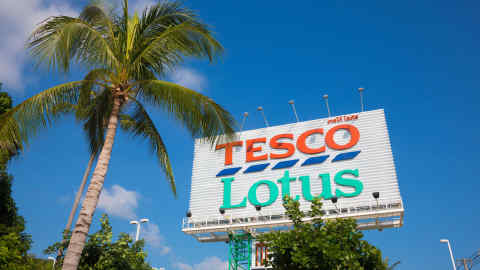 In an interview with Thailand’s The Standard at the weekend, Mr Dhanin described Tesco Lotus as “my child” and said he would use new technology and online operations to build the business.

According to Dealogic, the acquisition is Thailand's biggest M&A deal on record, followed by the CP unit CP All’s $6.4bn acquisition of Siam Makro from SHV Holdings in 2013.

It comes at a time when Thailand’s economy, which relies heavily on tourism and trade with China, is grappling with a slowdown exacerbated by the coronavirus outbreak.

Get alerts on Tesco PLC when a new story is published