A string of stresses at indebted property developer China Evergrande has left a mark on investor confidence for the country’s riskiest borrowers in the international bond markets.

Interest rates on Chinese high-yield bonds issued offshore were 13.3 per cent last week, according to an index from ICE and Bank of America, up from less than 10 per cent in June and close to levels when the onset of the coronavirus pandemic dragged down bond prices at the start of 2020. The recent peak in late July was more than 14 per cent.

The higher yields indicate that Evergrande’s woes have sparked broader concerns about the health of the property sector, which is responsible for about half of China’s offshore bond issuance but is under pressure from Beijing to reduce leverage.

“I would think that most of the weakness is contributed by the property developers,” said Edmund Goh, investment director at Aberdeen Standard Investments, of China’s high-yield bond market. “If Evergrande moves then it will have a pretty sizeable impact.”

Evergrande had $104bn of interest-bearing liabilities outstanding in March and is one of China’s biggest borrowers on international markets. But shares have dropped 70 per cent this year and bonds have also tumbled, stung by woes including local bans on apartment sales and legal challenges from its contractors. New rules also limit the leverage of China’s big developers.

Last week, the company warned its interim profits would drop by as much as 39 per cent as it battles deepening financial distress.

Brooke Masters
Huarong’s woes are a warning to lazy investors 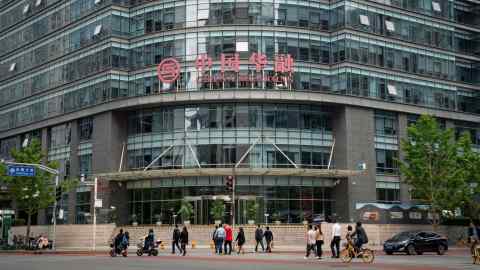 Evergrande’s bonds maturing in 2022 are trading at 48 cents on the dollar, about half the value they held in late May. S&P Global Ratings cut the company’s rating by two notches to triple C this month.

“[Developers] will continue to face liquidity drains in the near term,” said Bruce Pang, head of research at investment bank China Renaissance, who also pointed to restrictions on “land auctions and fundraising opportunities”.

A state bailout earlier this month for China Huarong Asset Management, the country’s biggest bad debt manager, has also not fully eased the strain on the broader market.

On Sunday, Huarong revealed its leverage rose to 1,333 times at the end of last year as losses wiped out most of its equity. After a five-month delay marked by volatile trading in its bonds, it also released its financial report for 2020.

Huarong’s perpetual bonds, which are rated below investment grade, have recovered to trade close to their par value after falling as low as 49 cents in April.

Rating agency Fitch, which rates the Huarong group as investment grade, updated its outlook to “positive” last week, saying the bailout was a form of “extraordinary support” given most of the companies involved were under the direct control of China’s Ministry of Finance.

Mohi-uddin said the high cost of borrowing in China’s onshore, renminbi-denominated credit market was also reflected in local governments’ reluctance to issue bonds to fund new projects as they face pressure from Beijing to get their finances in order.

Credit Suisse estimates that local governments have issued less than 40 per cent of their annual quota for so-called special purpose bonds, which are meant to fund infrastructure and other projects, reflecting far slower spending than in either of the previous two years.