Fears over healthcare costs rising among US voters, poll shows

Lauren Fedor in Charlotte and Christine Zhang in Baltimore

Americans’ concerns over medical costs have risen sharply during the 2020 presidential campaign, with more than a third of voters now believing the high price of healthcare is the biggest threat to the US economy, according to a poll for the Financial Times.

The survey of likely voters for the FT and the Peter G Peterson Foundation found 34 per cent of Americans believe increasing healthcare costs are the darkest cloud hanging over the US economy, up from 26 per cent five months ago.

According to the US Department of Health and Human Services, healthcare now accounts for 17.7 per cent of the US economy, by far the largest percentage in any developed economy. And while the growth in US medical costs has slowed in recent years, it still far outstrips inflation, increasing 4.6 per cent in 2018 and 4.2 per cent in 2017, according to the most recent data available.

The rise in fears over healthcare costs comes as several leading Democratic presidential candidates — notably Bernie Sanders, the US senator from Vermont — have spent months touting plans to overhaul the current healthcare system.

Mr Sanders, the self-described Democratic socialist, has campaigned for “Medicare for all”, which would virtually eliminate private health insurers in the US. Mr Biden has called for the expansion of the Affordable Care Act, or “Obamacare”, including a “public option” that would compete against private insurers.

When the FT first began polling in November, tensions with major US trading partners such as China and Mexico were the biggest concern for voters, with 27 per cent citing it as the biggest threat to the US economy. In the most recent poll, only 19 per cent of likely voters listed trade tensions as the biggest concern, reflecting decreased tensions following progress on trade talks with China, Mexico and Canada.

Fears over healthcare costs are rising as the coronavirus spreads in America, though the FT-Peterson poll tested voter opinion before the recent stock market sell-off and signs the Covid-19 virus was spreading in Washington state and other parts of the US.

The poll, conducted between February 20 and 23, found 51 per cent of voters thought the coronavirus would have a “little” impact on the US economy, compared to 29 per cent who said the disease would have “a lot” of impact “but for a short period”. Americans also reported making few changes in their behaviour, with 87 per cent saying they had not yet altered their business or personal financial decisions, such as cancelling travel.

The survey findings are part of the monthly FT-Peterson US Economic Monitor, which tracks voter sentiment towards the US economy ahead of November’s presidential election. The poll seeks to follow whether likely voters feel better or worse off since Donald Trump became president in 2017. Ronald Reagan defeated Jimmy Carter in 1980 by asking voters: “Are you better off than you were four years ago?”

Guy Cecil, chairman of Priorities USA, the Democratic super political action committee, said: “What we consistently find is that one of the most powerful indicators of whether we can move somebody to vote against Donald Trump is how they feel about Donald Trump’s impact on their personal economic situation.”

The latest poll found that 38 per cent of voters said they were better off financially now, compared to when Mr Trump took office in January 2017 — a figure largely unchanged from last month.

But the poll also demonstrated the persistent “gender gap” in voters’ attitudes towards the president, particularly among older voters. Half of men over the age of 55 said they were better off under the Trump administration, compared to 30 per cent of women of the same age. Among voters between the ages of 18 and 54, 44 per cent of men reported being better off, compared to 32 per cent of women.

Mr Trump has staked his re-election bid on a strong US economy, and has bristled at suggestions that the government’s handling of the coronavirus crisis is to blame for the recent market sell-off, at one point saying investors were spooked by the most-recent Democratic presidential debate.

The most recent FT-Peterson Poll was conducted online by Global Strategy Group, a Democratic polling firm, and North Star Opinion Research, a Republican group, between February 20 and February 23 2020. It reflects the opinions of 1,005 likely voters nationwide, and has a margin of error of plus or minus 3 percentage points. 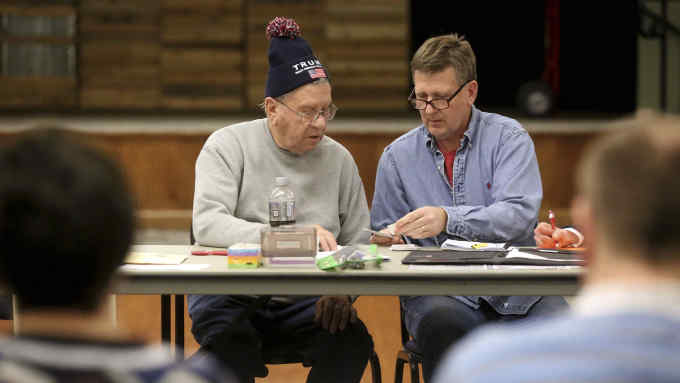