Coining it in: the rise of numismatic jewellery

There is a subtle irony in the fact that money, the very thing that allows us to amass material goods, is itself becoming immaterial. We pay via QR codes, face recognition or by hovering our phones over contactless devices. And just as currency is now coded rather than minted, jewellery is rediscovering the fashion of using coins as gems.

Bulgari has had a long-running love affair with ancient coins, which frequently appear as centrepieces in rings, necklaces, brooches and even watches, forming part of a collection the Italian house refers to as Monete (coins in Italian). In the house’s latest high jewellery collection, Wild Pop, the profile of the Roman emperor Claudius, who reigned from 41 to 54AD, shines from a bronze coin set centre stage in a golden belt.

Based in Rome, the Bulgari family was familiar with the most artistically significant coin jewellery — that crafted by the Roman jeweller Castellani, who spearheaded the “archaeological revival” movement in the mid-19th century as Hellenistic, Egyptian and Etruscan art and artefacts surfaced from excavations and were paid homage to in the arts. It was in the 1960s that Bulgari, which had already set coins in precious objects such as cigarette cases, began to make them a feature of the house’s narrative. Nicola Bulgari, grandson of the founder Sotirios Bulgari and vice-president of the Bulgari Group, developed a passion for the numismatic and started to set coins in yellow gold tubogas bracelets and necklaces as a stylish way to reference the family’s Greek and Roman roots.

“I’m very attached to Monete,” says Lucia Silvestri, creative director at Bulgari, who joined the house in the 1980s and discovered the world of ancient coins through working directly with Nicola Bulgari. “I like to incorporate coins representing a male figure into a piece of jewellery for its contrast between the virility of the image and the femininity of the object,” says Silvestri. A stern profile of Julius Caesar, the first ruler in Roman history to show his image on a denarius, in 44BC, dominates one yellow-gold, classic tubogas bracelet.

As rare as precious stones, ancient coins, sourced from antiquarians and auction houses, are referred to as “gemme nummarie” (nummary gems) and straddle centuries of history. Coins can command high prices at auction; the infamous 1933 American coin bearing a double eagle sold at Sotheby’s in 2002 for a world record $7,590,020. Bulgari treats each coin as a gem and jewellery set with them are sold with a certificate.

Last month Sotheby’s sold a Bulgari chain bracelet with tapered links featuring a 590—627AD silver Sassanian Dirham coin from Persia for $16,250. At the same sale, the centrepiece of a Bulgari necklace of similar style was an ancient bronze coin depicting King George III; inscribed “Georgivs III Rex”, the reverse shows the King’s coat of arms. It sold for $12,500.

Jewellery senior specialist at Sotheby’s Carol Elkins last December took care of the sale of a platinum and diamonds Bulgari necklace set with an 1857 United States $1 gold coin belonging to Barbara Sinatra. It sold for $62,500 against an estimate of $20,000. “Judging from the sales at auction of coin jewellery, I’d say there’s definitely a renewed interest in the genre,” says Elkins who says the style appeals to a broad audience because “they have an interesting look, show cultural heritage and are interesting pieces of conversation”.

To preserve its numismatic value, setting a coin in a piece of jewellery requires special care, points out Silvestri. It needs to be mounted between two bezels — following its often irregular contours — and the reverse of the coin must also be exposed. Once a coin is mounted on a jewel, says Elkins, its numismatic value becomes secondary to the overall value of the piece.

“They need to be perfectly weighted to remain light for the wearer,” adds Christian Hemmerle, a member of the fourth generation to work in the Munich-based family business. Last year, to celebrate its 125th anniversary, Hemmerle released a pair of earrings set with an 1893 Deutsche Mark bearing the year of their founding, and created a collection set with coins recovered from the Hartwell, a ship in the service of the East India Company that was wrecked in the Cape Verde Islands in the late 1780s.

First used by Hemmerle in the 1980s, coins are part of the objets-trouvés, like micro-mosaic or petrified dinosaur bones, which suit the subdued tones of the house’s creations. Incorporating coins in jewellery is a labour of patience. “We study, research and sample materials to achieve a desired texture or colour [to match the coin]” says Hemmerle. In case of pairing coins for earrings “we always ensure that the faces look at each other”.

“For me, owning a coin is to own a piece of history that has survived with its details intact, allowing us to study [those details] and dream,” says London-based Italian designer Benedetta Dubini. Ancient coins took centre stage in her debut 2014 collection, Empires. Still available, profiles of Nero, Cappadocian King Ariarathes VII and Alexander the Great dangle from medallion necklaces and earrings, and are mounted on rings.

Just as in the West coins conveyed political messages and rings set with imperial coins signified military distinctions, in India, by “using the government minted coins in jewellery, the wearer was paying homage to the government and royals,” says Tarang Arora, chief executive of the Indian jewellery house Amrapali. Having used coins for armlets, earrings and rings, Arora notes, “Necklaces are the most successful pieces as a number of coins can be placed in one object.”

For Italian designer Francesca Villa, who specialises in jewellery crafted with the disparate objects such as vintage stamps, buttons or prints, it is a series of rings bearing the little Indian coins named Fanam that has proved her most successful range. Her customers, she says, fall in love with the history “written in every coin” around which the jewel is born.

Besides telling the story of a civilisation, coins can be linked to a wearer’s own story, as was the case for one of London-based Carolina Bucci’s clients. Gifted individual 24k-gold ancient Indian coins to mark special occasions in her life, she asked Bucci to unify them in a necklace. The designer set the coins — each of a different size — into individual golden frames with a Florentine finish (frosted gold) and mixed them with the colourful Forte beads (the semi-precious stones Bucci sells as a kit ready to thread on Lurex strings) in a necklace for a touch of “sprezzatura spirit” that allows daily wear.

Instead of trawling markets, emerging designer Anissa Kermiche experimented with making her own 18k gold coins for her “Liberté, Egalité, Féminité” range. “I was creating a collection as an ode to the women of the French Revolution and thinking of ways I could portray how crucial they were; what better way to represent importance than putting it on a coin?” she says.

Kermiche used the dimensions and features of 17th century Louis d’Or but replaced the portrait of Louis XIII with her Lady Liberty, coining it the “Louise d’Or”. A set of five Louise D’Or dangles from an anklet (£1,470) or a single one, embellished by a little ruby over the fictive heroine’s shoulder, is set on a ring that holds the coin by two round diamonds (£1,100). The most successful of the series is the Louise d’Or Collier, a necklace of seven Louise D’Or that Kermiche says should be “worn as a statement, rather than simply a pretty necklace”.

Meanwhile, at Bulgari, finding the perfect coins to fit their renowned secret watches (timepieces hidden in jewellery), is a quest that can take decades. “After many years we have managed to purchase a perfectly circular and slim silver coin for a Monete secret watch,” confides Silvestri. “It’s extremely rare. It was a joy when we could finally create a beautiful watch with it.” A beautiful material piece of jewellery with a rare piece of money that will doubtless be purchased with a swift swipe of a card. 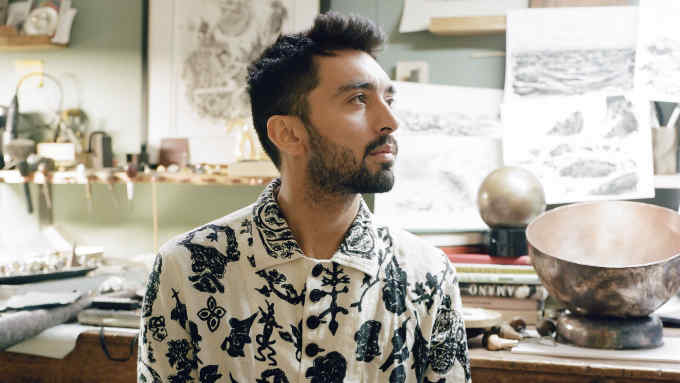