‘Black beauty is at the forefront of what I’m doing’

Hairstylist Cyndia Harvey, a winner of the inaugural BFC Changemakers prize, is championing a new look on the catwalk

My first experience of Cyndia Harvey’s calming presence was on a fashion shoot in a nondescript part of east London more than five years ago. The day was burning hot and tempers were short, yet Harvey, a hairstylist, was the epitome of cool as she methodically wielded her tools – a consummate professional.

It’s a very different scene the morning we meet to discuss the inaugural BFC Changemakers prize, which Harvey has won alongside two other UK-based creatives. She’s sitting at a desk in her airy Brockley flat, surrounded by modernist furnishings. I remind her of the shoot, and how she managed to dispel the panic that hung in the air that day. “I’m glad that’s what I project,” she laughs. “I definitely think I handle pressure really well. Nine out of 10 times, I just get tunnel vision.”

I realised that 95 per cent of my portfolio was Caucasian men and women. I had this wealth of knowledge and skills that I wasn’t showing off”

Harvey’s career is a masterclass in quiet determination. Born in Manchester, a small countryside district in Jamaica, she describes herself as an introspective child who used hair as a way to escape. “It was something I could use to daydream,” she says. Her mother was also a hairstylist; she spent time at the salon and had her hair done on the veranda each Sunday. It wasn’t until she was 17, after moving to London to join her extended family at the age of 11, that Harvey had an “academic crisis” and rediscovered her relationship with styling. “I was doing really badly at college,” she says, “and I remembered that this was something I loved.” She got a job at a salon and, over a five-year period, won awards and acclaim from her peers. She pursued editorial work, and stumbled across a magazine interview where a stylist gave a guide on how to find work on shoots. She followed the advice “to a T”, sending her CV to agencies representing hair talent. “Barely any of them responded,” she says, “and then one day I got a call back from the agency that looked after Sam McKnight. And here I am.”

Today, Harvey has an impressive roster of high-fashion campaigns and glossy editorials to her name. In 2017, she debuted a deeply personal film and photo series, This Hair of Mine, that explores her relationship with black hair. “I realised that 95 per cent of my portfolio was Caucasian men and women. I had this wealth of knowledge and skills that I wasn’t showing off,” she says. The process led her to an epiphany about her career: “I want to highlight black beauty; I want to put it at the forefront of what I’m doing.” For autumn/winter 2021, Harvey created elaborate twists and jewelled plaits at Simone Rocha, while she and her team gave models sleek cornrows and braids at Jacquemus.

Harvey’s talent for combining easy technical precision with playfulness, as well as her celebration of black hair and techniques, is what caught the eye of British Fashion Council chief executive Caroline Rush. “When we launched the BFC Changemakers Prize in partnership with Swarovski, we set out to find the unsung heroes of the fashion industry, those who go above and beyond and create positive change. Cyndia is exactly that,” says Rush. Harvey has been awarded £7,500 as well as a mentoring package. “I am a bit gobsmacked, to be honest,” says Harvey. “Obviously, it’s such a massive recognition and I’m just incredibly honoured and humbled.” 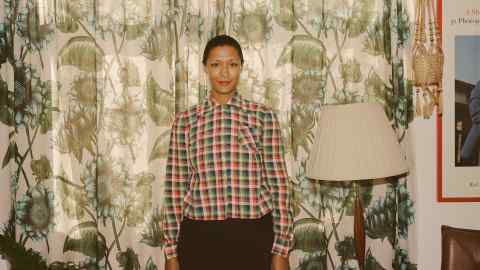 I get a distinct feeling that Harvey’s career has occurred without a masterplan. “In my day-to-day life, I’m trying to do the best work I can while celebrating my community,” she says, radiating the same zen mood that I saw on our first meeting. “I’m just following what feels right at the moment. I’m going where my heart takes me.”