The best 5k run in Tokyo

The ultra-popular route around the Imperial Palace is a must-do for runners, says FT correspondent Leo Lewis, as long as you observe the local etiquette

Japan is running-obsessed — Tokyo to the point of mania — and there are countless runs around the capital whose high-speed traffic jams attest to this passion. The Sumida River Terrace 8k is great for a longer sweat, the Meguro River 4k is especially glorious during cherry blossom season and the Yoyogi Park perimeter, particularly on weekends, is a lively jostle between the amateurs, the hungover and the serious in spandex.

But all of these are eclipsed by the Imperial Palace circuit. This unbroken belter of almost exactly 5k has evolved its own distinctive culture, and sends you on (mostly) broad pavements around the home of the recently crowned Reiwa Emperor and the chunk of land that at one point during the 1980s property bubble was reckoned to be worth more than the whole of California.

For both technical and aesthetic reasons, this is a truly lovely experience: predictably fussy etiquette guidelines are posted in various places, but the hardest and fastest rule is that everyone runs anticlockwise. Even a total newcomer is entitled to a sotto voce “tut” if they encounter someone speeding the other way.

The northern arc of the circuit is a gentle climb past the side entrance of the palace and up to a path that skirts the edge of Chidorigafuchi Park; the southern side is an invigorating descent that arcs down past the National Diet Building, the headquarters of the Tokyo Metropolitan Police and the ludicrously elegant Justice Ministry. Take a left through the chunky Sakuradamon gate and the whole thing opens out for the flat kilometre that passes the main gate of the palace on the left and the bristling towers of Tokyo’s financial district on the right. The whole route is punctuated by 100m markers each named after one of Japan’s 47 prefectures and each decorated with that prefecture’s official tree. You are never more than a few metres from some of Tokyo’s busiest roads, and yet you feel wholly isolated from all that.

The setting is, of course, unique. But what really sets it apart is the distinctive running culture and social scene that has evolved around it. Being adjacent to both the financial district and the central bureaucracy of Japan, the circuit is almost constantly busy in early mornings and lunch-hours. But it is particularly feisty and fun in the evenings when it is filled with groups of runners from the same company on bonding or fitness drives, city running clubs, university sports teams, loners, and couples testing new relationship waters with 30 mins of brisk exercise.

FT Globetrotter
Explore our city guide: Tokyo with the FT

There are pacesetters (people that run the circuit at a particular speed) sent out by some of the running stations that also rent lockers and showers. There is instant camaraderie — and there is one-upmanship. Favourite clothing, by far, are shirts that have been earned by completing deeply obscure marathons from around Japan.

Time for a trot

In a series from FT Globetrotter, our new insider city guides for the modern business traveller, FT writers share their secrets for great runs in global business destinations

Tokyo
The Imperial Palace stands out

On one beautiful spring day in 2019 shortly before his abdication, the former Heisei emperor, Akihito, and Empress Michiko took a short, unscripted stroll out of the northern gate of the palace and a hundred metres or so along the pavement outside their home. For the runners passing by with their music, their split times to beat and that private galaxy of thought that comes with exercise, it might have been the encounter of a lifetime. In the event, most of them didn’t even notice.

Where do you go running in Tokyo, or is there another tip you’d like to share? Tell us your city secrets here, or in the comments

Explore the series
READ MORE
How to be healthy in London 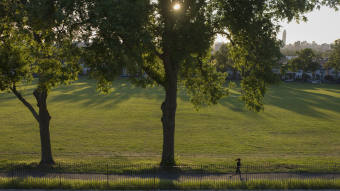 FT writers and readers share their top tips for staying healthy when travelling for work, including the best ways to navigate a city, where to work out and great places to eat well. See more in FT Globetrotter, our new insider city guides for business travellers.