Tranquillity in Capri – and other travel news

Escape off the main strip in Italy, or off the beaten track in South Africa

The jewel in the Capri crown

A villa on Capri: in itself, not a difficult sell. It’s one of the Mediterranean’s most beautiful islands when it’s not mortally oversubscribed with day-trippers. The key is in finding the right villa – private, with access to beach clubs and trails but at a remove from the fray.

Cédric Reversade is the man with the jewel in the Capri crown: Casa Mare, a five-bedroom quiet stunner set all on its own just below Via Krupp. Low-slung, spilling down several levels directly to the sea, it has a vibe that’s more Pantellerian dammuso than Villa Lysis; the owner, who deals in design art, has filled it with an extraordinary mix of contemporary pictures and sculpture and collectable 20th-century furnishings.

The low-fi charms (and excellent food) of Torre Saracena beach club are a 100m stroll to the west; La Fontelina is an easy boat ride in the other direction. But Casa Mare’s secret weapon – besides its eminent privacy – is its chef. Maria has worked for the villa’s owner since time out of mind, tends its private vegetable gardens and has the best fishmongers on speed dial; her handmade ravioli capresi are the stuff of international obsession. Price on request; uniquepropertiesandevents.com

Immersive conservation is a phenomenon on the rise, from Brazil’s Pantanal to Tanzania’s sprawling private reserves. September saw the debut in South Africa of a safari concept created entirely around the idea. Marataba Conservation Camps, in the privately managed park of the same name within Marakele National Park, flips the conventional bush-experience model on its head in more than one way – starting with the booking process. Instead of being accommodation-led, it matches guests with the right conservation guide, who is the architect of their Marataba experience. Founders’ Camp, with four suites, can be booked for exclusive use; Explorer’s Camp, with six tents and two teams of guides, allows for semi-exclusive bookings. Here, the standard drive-and-sundowners agenda gives way to tracking and tagging wildlife; assembling camera traps and monitoring the footage they capture; compiling ID kits of the charismatic megafauna; and, if your stay corresponds with a full moon, the thrill of shadowing rhino as part of Marataba’s regular nocturnal census.

Not that it’s all a grind – far from it: waterfall swims, a night of fly-camping and comfortable tented lodgings are par for the course. From $1,500 per night; classic-portfolio.com

Palm Beach with a Nantucket twist

The Bradley Park Hotel was one of the first to open on Palm Beach’s Main Street in the 1920s (known back in the day as the Palm Beach Plaza Hotel). The four-storey Spanish-colonial building on Sunset Avenue evinced all the charms of this gilded beach town, but the interiors were in need of a reboot. Next month, the property – fresh from the ministrations of its new New England-based owners, who also own Nantucket’s glorious White Elephant Hotel – will reopen with a fresh and extremely chic new face, as the White Elephant Palm Beach.

Courtesy of Boston-based Elkus Manfredi Architects, the new look takes the listed building back to its elegant bones and readorns it in the shades and textures of the seaside – seagrass rope, rattan, mother-of-pearl – with bold hits of tropical candy colours. There are 32 rooms, a small but chic pool, an interesting art collection favouring big American names (Robert Rauschenberg, Joel Shapiro), and a courtyard bar bowered in palms to round out the appealing picture. From $650, whiteelephantpalmbeach.com

A reboot in Rajasthan

The 20th anniversary of Suján, whose sigh-worthy properties across Rajasthan have helped define both luxury and conservation in India, wasn’t quite what its founders, Jaisal and Anjali Singh, were expecting. Instead of welcoming guests to their camps in Ranthambore, Jawai and Jaisalmer, and inducting them into the joys of communing with tigers and leopards in their natural habitats, lockdown saw the Singhs working overtime to bring healthcare to the communities whose participation in Suján’s wilderness-and wildlife-protection schemes is crucial to their success.

Now Suján is revamping all of the suites and tents, and introducing new wilderness and wildlife experiences, including a pioneering one at Jawai built around the rapport between humans and horses – a passion of the Singhs’, and long part of the fabric of Rajasthani culture. Expect an early 2021 Suján reboot, and watch this space for more. thesujanlife.com 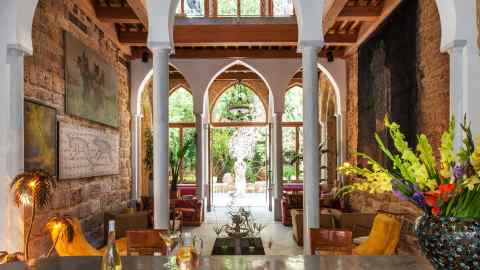