The big scooter bounce back begins

Scooter operators have had a hard few months — but now they're springing back into action. Who's taken the lead?

July 6, 2020
Print this page
Video: How far will electric transport take us?

Lockdowns across Europe were not great for scooter start-ups. Usage plummeted as tourists disappeared from city centres, locals stayed in their houses and even workers who were venturing out were concerned about just how hygienic shared transport really is.

Swedish scooter operator Voi shut down operations in all but six of its markets. Berlin-based Tier postponed a launch in Rome, pulled out of Turin and Malaga and scaled back across all markets. US operator Lime stopped services in Europe completely.

But now, as lockdowns relax and cities start moving again, the great bounce back begins.

The scooter market is also still a very young one — most operators have been in business less than two years — so making comparisons to this time last year (when most operators were live in far fewer markets) also has its flaws.

Still, Dott, the smaller Amsterdam-based scooter operator, says usage of its scooters jumped back to pre-Covid levels in all cities when lockdowns ended: on Monday May 11 people took the same number of rides as on Monday March 9. Now usage is even higher, the company says.

Looking at Paris in particular, Dott says its operations in the city are back to profitability and each scooter is making four rides per day. It seems that lockdown has also made Parisians better citizens; a higher percentage of rides are now ending in official parking zones (97 per cent), compared to 83 per cent in February.

Tier’s operations remain closed in Italy and Spain, but Roger Hassan, chief operating officer, says that overall usage is not too bad. “We’re at levels we were seeing in October last year,” he says; not quite the numbers the company was hoping for in May, but not a disaster. Germany and the Nordics are making quite a big comeback, he adds.

Meanwhile, Voi says usage is back up to 50 per cent compared to last May.

“From February to March, usage dropped dramatically, with cities seeing somewhere between zero and 20 per cent of what had gone before,” says Voi, which paused operations in 30 cities when governments ordered people to stay indoors. “At that stage there was little point in having scooters on the streets, especially as we wanted people to comply with lockdown.”

Tier shut down 14 cities (out of 59) and, in the worst week of lockdown, saw usage hit perhaps a tenth of peak summer volume, says Hassan — or around 50 per cent of pre-Covid, low-season usage.

Lime, which stopped operations in all markets, saw a 100 per cent drop in usage.

Meanwhile Dott, maintained a limited service in all nine of its cities. In France, this meant it accounted for nearly all scooter activity in April (97.6 per cent).

Looking at app reviews, Tier has had a great time in comparison to its (global) competitors. At one point during lockdown, 20.1 per cent of global scooter activity was provided by Tier, according to the Micromobility Industries blog.

Hassan reckons this is because many of the US providers are not using swappable batteries in Europe yet, which leads to higher operational overheads. When utilisation is low, those overheads become even harder to justify.

Call it marketing ploy, act of kindness or both, several of the scooter operators announced schemes to let essential workers use their vehicles for free during lockdown. Tier says it handed out 1.5m free minutes to front-line workers to help them travel safely (riders were entitled to up to 15 minutes free at a time).

Dott formed 70 partnerships with healthcare organisations and essential shops to help their staff get into work safely, and gave out 15,000 free rides to healthcare workers.

Even lockdown did not stop some of the scooter operators launching new cities. Tier has launched in five news cities since early March, including Trondheim in Norway and Uppsala in Sweden. Voi also launched in Trondheim — and Zurich — over the past two months, while Lime has recently launched in Rome and Krakow.

Meanwhile, Dott launched in Warsaw during May. It also has a presence in three Italian and five German cities.

Tier says it plans to launch in a further five to six cities in the coming weeks (three of which will be in Germany).

All of the main operators in Europe will also be hoping to launch in several cities in the UK in the coming months.

Scooter users are spending more time on the vehicles than they were before the pandemic hit. Tier has seen a 20 per cent global increase in ride duration, trips taken on Voi’s scooters are almost double as long as pre-Covid (now 18 minutes on average), while Lime says it’s seeing rides in Europe that are 25 per cent longer on average.

Riders now are locals focused on commute and essential trips

Scooter companies are also reporting more journeys starting and ending in residential areas. This — along with the longer ride times — suggests that scooters are being used more for utility than for sightseeing at the moment.

“Riders now are locals focused on commute and essential trips,” says Lime. Voi has expanded its operational zones in all cities to cater to these users.

Taking a scooter has also become better value, for the meantime. “We see increased distance travelled per minute,” says Lime. There are fewer cars on the roads, and more space given over to micromobility, which means riders can whizz along faster. In comparison to last year, rides are around 20 per cent faster in Germany, Austria and Switzerland and 33 per cent faster in Greece.

Riders are also using scooters more times per day; in Budapest, Lime trips per day are up by 26 per cent and in Bucharest, up 18 per cent. Active Voi users are taking more trips per week; the company has launched a loyalty programme for these frequent users, to make trips more affordable the more they ride.

The story was first published by the FT-backed Sifted website 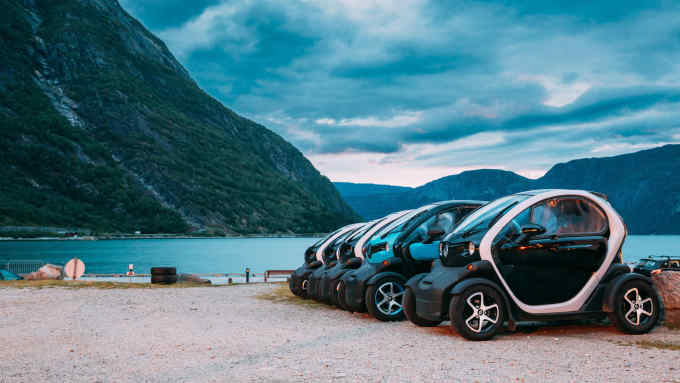