A move to ‘feminine corporations’ could improve workplaces for all

After Deborah Hargreaves started to talk to groups of women for her new report on what a “feminine” corporation might look like and what women would change about work if they could, she found that something had shifted in her own view of the workplace. “The more I thought about it, and talked to people about it, the more bizarre it felt.”

Ms Hargreaves, a former senior Financial Times and Guardian journalist and founder of the High Pay Centre, a think-tank that monitors executive pay, was awarded a fellowship by the Friends Provident Foundation to spend a year compiling her report. Her findings, published this week, offer a manifesto for change through 10 recommendations on how a female-driven approach to working life might create better businesses for the future — and in turn make the economy fairer for all.

Over the course of speaking to more than 150 women in a variety of working situations in the UK, she realised how odd — and at odds with modern life — much of business remains. “The whole experience of women in the workplace is completely and utterly bizarre in the way we have to make excuses for caring for our children and pretend that we are fully engaged with the job 100 per cent of the time.

“Surely we should all embrace the fact that we are caring for another generation or caring for vulnerable people in our own generation?”

“Making excuses” is something many mothers will recognise. Lying about a doctor’s appointment in order to attend school events; covering a child’s sickness by claiming ill health of our own; removing photographs of children from a desk because a manager has banned them: these are all things that many women have experienced, just a handful of the small indignities and subterfuges to keep their heads above water and look “professional” in the workplace.

Ms Hargreaves hopes her report will help lead to a radical shift in attitudes. The main conclusion of Women at Work: Designing a Company Fit for the Future is that businesses need to acknowledge women’s caring responsibilities. As the report puts it: “The organisation would put caring for children, relatives and parents at its heart.”

Work & Careers
How to win over men and influence them 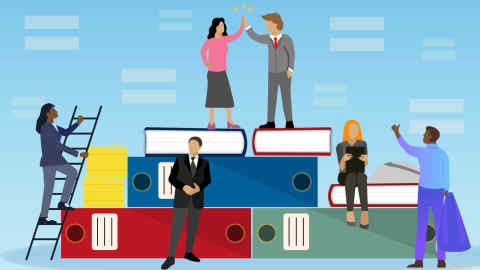 Other major recommendations include a focus on four-day working weeks, flexible rotas, home-working and job sharing — for men and women, and at all levels of the business.

Ms Hargreaves interviewed innovative job-sharers, including a three-person job-share, a husband and wife sharing and two senior women who had taken their job-share with them to a role in a different organisation. “My view now is that all jobs can be done part-time or in a job-share,” Ms Hargreaves says. “You have to think creatively — take some things out [of the job description]. All jobs could be done in different ways.”

Her explanation for why women still feel guilty for having caring responsibilities is rooted in the structure of the workplace: “Work has always been the province of men, a completely separate place that men go, almost to escape from [family] — and women have come into the workplace but it hasn’t really moved on to accommodate us. Obviously we have concessions but why has it not moved on more?”

Everyone, she says, needs to make more demands and be unapologetic about having lives and responsibilities outside work. “I think caring comes first and then you can turn things on their heads and look at them differently. Once you do things differently, it just seems to be common sense. Why would you not?”

While evidence suggests many fathers now want to take a far greater caring role, and that is likely to help accelerate the uptake of flexible working and other changes, the reality is that the burden of care — including for elderly relatives — falls to women, with consequent harm to their careers and the phenomenon of the marginalised and overlooked worker on the “mummy track”.

Ms Hargreaves believes nothing will truly shift, however, until “a critical mass” of women run companies. “The women at the top now are in a minority and they have had to fit into the male norm — once they are at the top they may try to do things differently and either they are shot down by men or they don’t succeed or they retreat — it is hard to get things through. Those I spoke to for this report are doing a lot to help other women get up into senior positions. I think in some ways we have to be braver at pushing ourselves forward and pushing our agenda — not just thinking ‘yes, I have got a bit of flexibility for myself’— but doing it for everyone.”

There is only so much women can do to effect change, either individually or by mobilising in groups. Structural change to workplaces is needed.

News in Focus podcast13 min listen
What would a female-driven workplace look like?

And while it is highly unlikely that a significant number of traditional businesses will suddenly shift their priorities to work around their employees’ home lives, some other ideas — such as appointing equal numbers of men and women at board level, and an ethical and sustainable approach to business — are in tune with the times.

“The honest corporation, with a purpose and a sense of mission, could become the voice of reason again. Millennials are much more bothered about purpose and sustainability, and they are increasingly becoming a voice within the corporate sector. I am hoping that might help change things.”

I worked for Ms Hargreaves nearly 20 years ago, when she was one of very few senior women at the FT. She embodied the demands she makes in her report: she was good at her job but didn’t hide the fact she has children, she took time off for caring — and was flexible about everyone else’s family commitments.

Treating people fairly actually works. As Ms Hargreaves says: “This is not a utopian agenda, it is common sense — and will help men as well as women.”

There are 71 per cent of women aged 16-64 at work in Britain. Some of the main areas that affect them are:

*Pay gap: the difference between men’s and women’s pay remains at 9.6 per cent across the economy.

*Caring and flexibility: the right to flexible working has been enshrined since 2014 but take-up has tailed off.

*Biology: menstruation and menopause are two of the great taboos in the workplace. The failure of managers to recognise the problem can leave women feeling vulnerable at work.

*Progression: Women often get overlooked for promotion. Some organisations are introducing mentors and a chance to try for a top role

What would a ‘feminine corporation’ look like in future?

*The organisation would put caring for children, relatives and parents at its heart

*Workplaces would offer affordable childcare — in-house or via subsidised vouchers

*There would be a focus on job-shares, flexible working, and a four-day week encouraged at all levels

*The workplace would be inclusive and open to people from all heritages, disabilities and identities