Gilead to charge governments $2,340 for remdesivir

Donato Paolo Mancini in London and Mamta Badkar in Nantucket

Gilead Sciences has said it will charge governments $2,340 for a 5-day course of remdesivir, a drug that has been shown to shorten the time it takes Covid-19 patients to recover.

The US biotech group said government healthcare programmes in developed countries would be charged a flat fee of $390 per vial for the drug. A five-day treatment uses six vials.

Remdesivir, a medicine once seen as a potential Ebola treatment, is the only branded drug to receive emergency use approval from US regulators for treating Covid-19.

Clinical trials of the drug, which is given intravenously, have found that it reduced the length of hospital stays for coronavirus patients by a statistically significant margin, although it did not reduce mortality rates.

Peter Maybarduk, access to medicines director of advocacy group Public Citizen, criticised Gilead’s pricing, saying it was “a display of hubris and disregard for the public”.

“Gilead has priced at several thousand dollars a drug that should be in the public domain [and] has yet to show why the price should be higher,” he said.

Government-backed health systems including the UK’s NHS negotiate aggressively with drugmakers on price, meaning some could end up paying less than Gilead’s proposed $2,340 per course.

This month a cheaper steroid called dexamethasone emerged as an alternative coronavirus treatment after British researchers showed it significantly reduced mortality in patients requiring ventilation. The drug costs about £30 for 50 tablets, according to the British National Formulary.

For remdesivir, private insurers in the US would be charged $520 per vial — a higher rate than governments — bringing the cost for a typical patient with commercial insurance to $3,120. The amount a patient would pay out of their own pocket would depend on their insurance policy.

Public discontent over the high price of drugs in the US has put pharmaceutical companies under intense scrutiny.

Gilead said it had priced the drug “well below” what it considered to be the value of the benefits it provides.

The New York-listed company claimed the shortened recovery time would save hospitals about $12,000 per patient. Gilead said it had set the price to allow “broad and equitable access at a time of urgent global need".

It said it chose to charge governments a flat fee to “remove the need for country by country negotiations on price”.

A study by the National Institute of Allergy and Infectious Diseases (NIAID) found that remdesivir shortened the recovery time for virus patients by four days on average.

Gilead added that it had reached an agreement with the US Department of Health and Human Services to manage the allocation of the treatment until the end of September while supplies are constrained.

Gilead itself has come under close scrutiny over the pricing of drugs including its HIV treatment Truvada, which has a list price of over $20,000 a year.

Andrew Hill, a University of Liverpool academic, said countries should prioritise dexamethasone before investing in remdesivir. 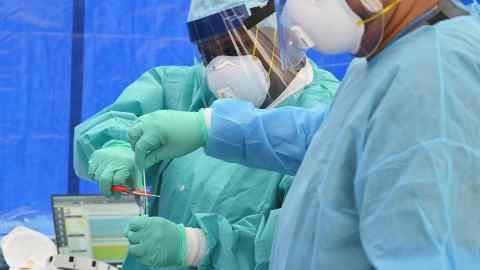 “Remdesivir does not have a proven survival benefit and the results have not been consistent between studies,” he said. “It is not clear why 5 days of treatment should improve clinical responses, but not 10 days of treatment.”

Dr Hill and others argued in a study published in April that remdesivir could be mass-produced for $9 a course. Gilead disagreed with that costing.

Hopes had been high for another potential Covid-19 treatment, the antimalarial hydroxychloroquine, but a series of clinical trials have shown it has no benefit for hospitalised patients.