I love seeing people suddenly stop in their tracks on the pavement when they first notice the shop,” says Steve Dolfi, one of the four siblings who own and run À la Mère de Famille. Translated as “To the Mother of the Family”, the chocolate shop opened on the Rue du Faubourg-Montmartre in the 9th arrondissement of Paris in 1761 and has been trading at the same location ever since. “First they study its façade,” Dolfi continues, “and then they peer through the display windows. Almost invariably, they finally succumb to temptation and come inside. The allure of this historically sensual shop is still irresistible.”

It’s not just the antique, emerald-green façade with its gold serif letters – a listed monument, since 1984 – that make À la Mère de Famille one of the French capital’s best-loved confectioners. Inside the shop, antique mahogany-framed, glass-topped display cases are stocked with dainty boxes of handmade chocolates (from €17.50), piles of jewel-toned fruit jellies (from €16), rich pralines (from €23), hyper-real marzipan fruits (from €21) and slabs of nougat (from €4). “We’re merchants of pleasure, because what we sell creates joy,” says Dolfi.

The Dolfi siblings take their role as proprietors of Paris’s oldest chocolate shop seriously. “Our job is to make the best chocolates, candies and pastries in France, and to perpetuate the tradition of excellence so we can some day pass it along to those who follow us,” says Dolfi. They remain a bean-to-bar chocolate shop, purchasing and processing cocoa beans to make their own signature chocolate. “We buy cocoa beans mostly from Haiti, Peru, Venezuela and Madagascar,” explains Dolfi. “Our signature chocolate has a suave texture and a warm, earthy taste that recalls the tropical forests in the countries where the beans are grown.”

Following a model pioneered by Hermès, which has bought several of its artisanal suppliers to keep them in business, the Dolfis purchased La Maison au Négus, an acclaimed sweet shop in the French city of Nevers, in 2013, and Stohrer, the oldest pastry shop in Paris, in 2017 (Stohrer earned international celebrity status in 2004 when Queen Elizabeth II visited for a Puits d’Amour, a crème pâtissière-filled puff pastry, during a trip to Paris). À la Mère de Famille now carries Stohrer pastries and Négus de Nevers, a soft chocolate or coffee-flavoured caramel enclosed in a hard shell that was created to commemorate a visit from Emperor Menelik II of Abyssinia (now Ethiopia) in 1900. “We believe in preserving the sweet side of France’s gastronomic heritage,” says Dolfi.

Despite the family’s reverence for French culinary history, the Dolfis are enthusiastic innovators. They regularly introduce new products, including a praline and pumpkin-seed chocolate bar that’s become an energy-boosting favourite among the dancers at the nearby Folies Bergère. They also no longer use white sugar, preferring what the French call sucre roux, unrefined brown sugar, and using “a lot less than we once did,” stresses Dolfi.

HTSI
The many-layered mystery of tiramisu 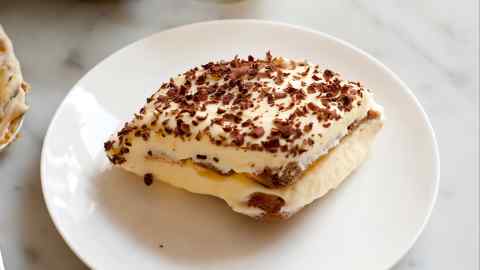 Asked to recommend a signature treat among the temptations, Dolfi insists on naming two: Toucans (from €12.50) – puffed pistachio or sesame pralines covered with chocolate and a dusting of cocoa powder, which are “bliss-inducing”, and the Palet Montmartre (from €17.50), a razor-thin chocolate disc filled with praline or ganache that “melts in your mouth”. “It’s a little marvel,” says Dolfi.