Get limited time offer
How To Spend It  Sport

Megève, France, 2021: 1,100m above sea level. I’m here to undertake one of the toughest challenges of my fitness journey so far. At 7.30am tomorrow, I will join a peloton of 410 riders from 41 countries embarking on what is widely regarded as the world’s premier amateur road cycling race – the Haute Route Alps. With seven consecutive days in the saddle, covering 800km and 21,000m of climbing up world-famous Cols (which you’ll have seen on the Tour de France), it’s enough to test the mettle of even the fittest rider. For most, it’s the challenge of a lifetime.

I join the other competitors in a large sports hall at the heart of the event village, carb-loading at the pre-event pasta party, a near-customary occasion for endurance events. Just outside are numerous gazebos housing everything from bike bag drop-off points to Mavic mechanics to performance partners – it’s the main focal point for riders, and will be rebuilt at each stage finish.

Sitting at a trestle table, tucking into my bowl of penne, I can’t help but notice the atmosphere is more restrained than one would expect at a Saturday night dinner for hundreds. Pre-race nerves for this most gruelling cyclosportif have understandably taken hold.

I strike up conversation with a svelte-looking gent sitting opposite: John, aged 51, from Lancashire. He’s very knowledgeable on all things cycling and comes well prepared, so I’m happy to glean some invaluable last-minute advice. Although I’m only taking part in the first two days – amounting to 219km – a cycling event of this calibre and scale is new territory for me.

John is a fair representation of a typical rider here. He’s a passionate cyclist who came to cycling perhaps after having started a family, and is doing well in his career. This makes up around 75 per cent of the peloton, with the remainder ranging from former, or near, pro riders in their prime jostling for victory, right through to the more elderly (there’s a gentleman of 74 this year) whose aim is to simply reach the finish without being caught by the broom wagon. To give some context, it will take the backmarkers twice as long as the frontrunners to complete it, so there’s a huge range in abilities. It’s largely a male event, with just 10 per cent female participation.

What is common for all riders, though, is this will be the highlight of their annual riding calendar. Since the Haute Route’s inaugural event in 2011 (2021 is the 10th anniversary edition), the race director set out to create an experience that was as close to pro level as possible, and this very much remains the case today. Rider support is unparalleled – Mavic mechanics support the riders along the route in their unmissable bright yellow cars and motorbikes, 100 marshals line the route to stop traffic, 28 motorbikes escort you, and numerous refuelling points are stocked with high-quality nutrition. There are 25 masseurs waiting at the end of each stage offering massages, and all accommodation and bag logistics are taken care of. Oh, and a kit laundry service halfway through. So it comes as no surprise that a staggering 40 to 50 per cent of all entrants are returning alumni from previous Haute Route events – they’re clearly doing something right.

With a 5.30am alarm beckoning, as well as final prep still to be done before bed, I wish John the best of luck and take the short walk back to my four-star hotel. I feel much more at ease and part of the peloton now, and as ready as I’ll ever be for what tomorrow brings.

Next morning, we’re off. It’s around 11 degrees celsius with little wind, so conditions are near-perfect. Apart from a windproof gilet stuffed in a back pocket for the long and cool descents, there’s no need for extra kit, which saves precious grams. I’m equal parts on edge and exhilarated as I find myself riding in the middle of an enormous peloton. During a straighter section of road, 500m ahead I catch a glimpse of the Tête de la Course car leading us out – it’s a staggering sight, but I concentrate on not hitting the bikes in front or either side of me. How the pro riders make this look so easy, I don’t know! After around half an hour, we hit the foot of the Col des Aravis, marking the first ascent of the day. I reach for my water bottle and take one final unfatigued sip before kicking on.

Today’s route is 110km with 3,000m of climbing – on its own not so bad, but with six similar days to follow, including a Queen Stage of 182km and more than 4,700m of climbing – the cumulative fatigue is not to be underestimated. With this in mind, there is some restraint amongst riders, particularly those who haven’t arrived in peak physical form. As we rise up out of the valley, the sun appears from behind the top of a high mountain peak ahead. It’s spellbinding and amazing to be in this epic-ly proportioned ’scape, quite unlike the intimate Surrey lanes I’m used to back home. I keep telling myself to take it all in, look around at the views and have a chat with other competitors. And I try not to be fixated by the stats on the screen of my Wahoo GPS cycling computer.

The hours roll by. At every junction or roundabout, marshals stop any traffic and wave us on in the correct direction. I’ve never experienced anything like this, to be able to continue without any unnecessary stopping – all part of the “pro” level of support. It’s very cool. The feed stations, as expected, are a hive of activity with riders resupplying: if blood glucose dips too low, it will be hard to recover and keep going. Unlike some other sportifs I’ve done, these are very well managed, with numerous staff efficiently keeping water containers and nutrition in ample supply, and the range of options are pleasing to the palate, from cake to energy bars and bananas.

The best adventure holidays in the world
The Ironman’s holiday: a new extreme sports retreat 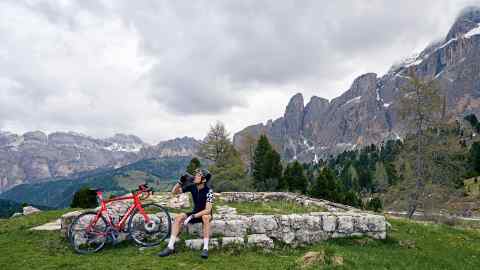 In the name of safety, there are untimed sections on each stage, which I was initially sceptical about pre-race. However, being in such close proximity to other riders – some with an overly zealous competitive spirit – charging down hairpin bends on steep descents with oncoming traffic could be a recipe for disaster, so I’m grateful for this. It has the added advantage of allowing you to grab an extra 15 minutes of respite at the refuelling stop without consequence on your time. Once the course flattens out again, the clock starts, and then it’s full gas.

Stage two: 109km with 3,450m of climbing. We roll again at 7.30am in favourable conditions, heading south to Tignes. It’s a tougher day as there are two particularly big climbs: the Cormet de Roselend, which is around 1,200m of vertical, and then a long 25km climb with a similar altitude from Bourg-Saint-Maurice to the finish line. I thought the scenery couldn’t get any better but it surpasses the previous day’s, and the roads are every cyclist’s dream. It is also truly gruelling, but I manage to come in 65th position after four hours, 55 minutes. The leader takes three hours 42 minutes, and the 408th and final rider eight hours one minute.

After a restorative massage and final stroll around the event village, it’s time for my departure, and with mixed emotions I hop in a taxi home. There are five further days and six cols of over 2,000m (Iseran, Galibier, Lautaret, Granon, Vars and Bonette) remaining, a time-trial stage up Alpe d’Huez, and an epic roll into Nice for the chequered flag and one hell of a party. The riders have an incredible time ahead of them – a life-affirming, leg- and lung-busting challenge. I wish I too was able to claim the bragging rights of having completed this most iconic event for the rest of my cycling days. Maybe next time.