Fat, speckled catfish writhe in shallow buckets at Tinu Huntontor’s stand in Ajah market in Lagos. Occasionally one flops out on to the ground where it wriggles in a muddy puddle until she scoops it up. Customers come and go, they haggle, they smile and chat, 18 hours a day, almost every day, as they have for decades now.

This work used to support Ms Huntontor’s small family in an informal fishing community on Lagos Lagoon. But for the past two years, Ms Huntontor, 42, has faced additional pressure to provide for her family, which has swelled from five to roughly two dozen.

Urbanisation is often considered from a western perspective, with young professionals crammed into megacities, living in pods in ever-taller skyscrapers made from sustainable materials.

But it is Africa that will drive global population growth over the next 30 years — and how urbanisation affects people there now informs how the greatest chunk of humanity will live in 2050.

The story of Ms Huntontor’s family of Egun fishermen, like that of many of the urban poor in Lagos and megacities across the continent, is one of displacement.

The population of Sub-Saharan Africa is set to double to more than 2bn by 2050. The continent is already 43 per cent urban, a figure that is set to soar as young jobseekers migrate to the cities that are the continent’s economic engines. In Nigeria, the average age is about 18 and more than 40 per cent of people are under 14.

The UN predicts the country will add 189m urban dwellers by 2050. Estimates suggest that 10m more people will flood into Lagos between 2020 and 2035 — roughly 10 times the number of people who will become Londoners in the same period.

For Ms Huntontor’s family, the effects of population growth and rapid urbanisation have been devastating: their children’s education has been disrupted, community ties severed, a home they spent years saving for destroyed, and small businesses crushed.

Her mother, five of her 11 siblings and their children arrived at Ms Huntontor’s in 2017 after they were forcibly evicted from their ancestral home in Otodo Gbame, another informal waterfront community in Lagos. About 30,000 Lagosians were removed from the area, often violently, as police and paid thugs razed their homes.

Like many others, they were forced into a sort of multigenerational living — a trend that is also gaining traction in the west as households pool resources. In Nigeria where the population is much younger — and more than half of people aged 15 to 35 are unemployed or underemployed — families that join together also share resources, but there are much fewer to go round.

“Before, things were OK, but since they [the family] all joined up, it’s very difficult to feed everyone with the little that comes from the market,” says Ms Huntontor.

Her brothers head out into the lagoon each day on rickety tosihuns (dugout canoes) to fish, or hustle for manual labour; their wives help Ms Huntontor smoke and clean the catch, which she sells along with other fish she buys at the wholesale market.

The family shares everything, from childcare to food and drink. The courtyard is a gathering place, kitchen, fish processing plant and playground; the lean-to porch is a dining room and tailoring studio for the grandson who wants to train in the trade.

“The biggest priority for all of us is the children,” Ms Huntontor says through an interpreter in the dusty yard between her home and the corrugated metal shack in which her family lives. The children range in age from her late brother’s newborn to teenaged graduates who are unable to find work.

Two months ago, Ms Huntontor became the family’s primary — and often sole — breadwinner after her eldest brother was shot and killed in front of her home. Peter died in July during a weeks-long turf war between local gangs, known as “area boys”, who were fighting on behalf of the big men dredging sand from the lagoon for construction projects in the city.

How to manage urbanisation

Experts suggest that the way things are going at the moment does not bode well for family life in 2050.

“Most African cities are not configured for such explosive growth,” he adds. “With more forethought about urban population and spatial growth, the region’s governments could reduce — or at least minimise — the negative consequences of forced evictions.”

But in Lagos, there has thus far been little focus on urban planning, or easing the effects of the city’s incredible growth.

“[Forced eviction] continues with impunity and the forces that are driving urbanisation and growing land values in the city and luxury real estate development continue to make this happen and suggest that it’s not likely to end,” says Megan Chapman, co-founder of Justice and Empowerment Initiatives, an organisation that fights forced evictions.

Often that displacement results in little more than ruined lives, she says.

Two years on from when Ms Huntontor’s family was evicted, cows sometimes graze on the razed remains of their old community, which is overgrown and floods in the rainy season. There’s a banner nearby advertising detached houses with a 20 per cent discount and a flexible payment plan.

Now there are rumours that the community next door to Ms Huntontor’s home, a cluster of ramshackle huts on stilts over the water, is going to be destroyed to make way for another dredging operation.

“You see what’s happening,” says Ms Huntontor, waving her hand dismissively toward the dump trucks trudging in and out. “We’ll probably be kicked out of here one day, too — and if the whole family weren’t here, I would leave right now.”

Her mother, Mary Kunnu, 78, has tribal markings tattooed on her skin, faded and stretched with age. She wonders where the family would go. Ms Kunnu’s sister — who raised Tinu — moved in with family in another community when she was evicted from Otodo Gbame, but that household now numbers about 30.

“I have faith [that] whenever god intervenes, things change — and I hope he does,” says Ms Kunnu. “But we’re never safe.” 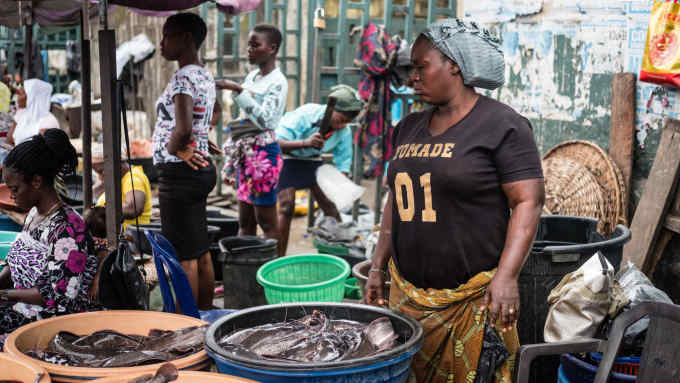