Many guises for a new breed of legal team leader

In football’s Premier League, the delicate negotiations around buying a player can come down to hours or even minutes before the transfer window closes.

When the details of the deal have been hammered out and personal terms agreed, the last step is for the lawyers, who rush to complete the necessary paperwork in time to avoid the multimillion-pound investment collapsing.

Chris Anderson, head of legal services at Everton Football Club, believed that if the club could automate the process it could lessen the risk of losing a player. While recognising that each signing is different, he worked with a law firm on a program that could draft the documents while accounting for variables such as the particulars of each player, the country they are from and the relevant regulations.

“It’s the kind of situation where at some football clubs, mistakes have been made and there have been some instances where the deadline has been missed because the paperwork hasn’t gotten done in time,” says David Halliwell, director of knowledge and innovation delivery at Pinsent Masons, the UK law firm that worked with Everton.

The project illustrates how the role of the in-house lawyer has changed in the past decade. Legal budgets have come under greater scrutiny, technology has reshaped the job and general counsel now spend more time focusing on what they can add to a business rather than just how to protect it.

Businesses expect corporate lawyers to think more strategically than ever, and to explore using new technology — such as artificial intelligence and blockchain — that will help them to work more efficiently, says Veta Richardson, president and chief executive of the Association of Corporate Counsel, the global membership organisation for company lawyers.

“GCs have become increasingly savvy,” she says. When organisations first established the role of in-house lawyer, they often thought of it as having someone to manage legal costs. “But [with] the management of compliance, regulatory, data privacy issues, things are getting increasingly more challenging, and it’s not just the laws of the home jurisdiction that GCs have to keep their arms around.”

In private practice, you advise, but then you hand it over to the client to make the decision

“They’re not just responsible for managing [internal and external teams of lawyers], but are expected to be a business partner who is instrumental in contributing with other members of the leadership team,” he says.

The scope of the role has expanded in some cases to include overseeing tasks such as corporate security, lobbying, government affairs, human resources, risk management and sometimes even managing profit and loss for intellectual property, Mr Udelsman says.

As billing rates charged by outside law firms continue to rise, general counsel are becoming more creative in how they spend their budgets, Mr Udelsman says. That includes increased use of both technology and contract lawyers, as well as doing more work in-house.

Many large legal departments have created a “chief legal operations” role to handle the day-to-day management of the in-house lawyers as the general counsel becomes more of a strategic adviser, Ms Richardson says.

Everton’s Mr Anderson was previously an associate lawyer at law firm Slaughter and May, advising Arsenal, Everton and other football clients, before he moved in-house about three years ago. He was Everton’s first in-house lawyer, and has since expanded the team.

“The world of the in-house lawyer is changing and, for me, it was really about sitting down and deciding what a general counsel is for and what value [the role] can add to an organisation,” he says. “For me, it was strategy.” 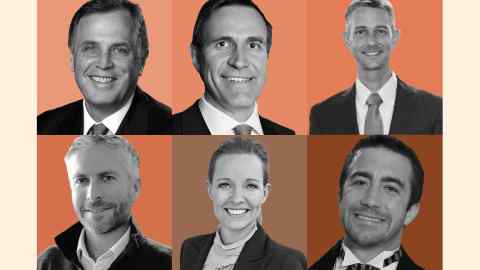 It is not that the workload is any less, he believes, but it is a different kind of role. “You are a senior manager in the organisation,” Mr Anderson says. “It suits a different mindset. One thing in private practice I found quite frustrating is that you don’t ultimately make any decisions. You advise, but then you hand it over to the client to make the decision.”

Everton is now trying to find ways to adapt the technology it has developed for the transfer window for contracts used in franchise and sponsorship deals and in non-player employment contracts. This would allow Mr Anderson and his legal colleagues to spend more time on other projects.

“What we wanted to do was help them take the risk out of the situation,” Mr Halliwell says. “They tend to be quite stressful times with all the negotiations, and Chris wanted every ‘t’ crossed and every ‘i’ dotted.”

In football player transfer deals, even when not completed on a transfer window deadline, time is of the essence. The selling club wants the deal done quickly, both sides want to complete the talks before news organisations find out, and no one wants to risk the player losing interest in his current team because of a dragged-out negotiation, says Mr Anderson. Everton helped get the summer 2017 transfer window under way by announcing it would sign two players — Jordan Pickford and Davy Klaasen — in deals that will ultimately total £54m.

When the program worked earlier this year without a hitch, Mr Halliwell says: “I’m not going to lie, I breathed a sigh of relief.”

Recent graduates from law school are often saddled with debt, making a job at a leading law firm — and the hefty pay cheque that comes with it — a logical career path.

But many, disillusioned with the slim chances of making partner one day and the gruelling hours it would take to get there, hope to stay only a few years. After that, the options tend to be government work, non-profit organisations and, often, going in-house.

“Most law firm associates aspire to go in-house,” says Veta Richardson, chief executive of the Association of Corporate Counsel. “I’ve heard numbers as high as two-thirds would prefer their next gig to be in-house. There’s the ability to get to know one client, without the pressure to bring in business, and with the work-life balance but while doing challenging, fulfilling work.” She adds that “there’s a lot of unhappiness within the law firm ranks”.

The downside is that, in the US, at least, pay is generally not as high as that of an associate at a big law firm and many recent graduates have heavy debts to repay, says Lee Udelsman, senior recruiter at Major, Lindsey & Africa, the recruitment firm. When some large firms in the US raised associate salaries recently, there was “a little bit of tension” for in-house lawyers: “There was a disparity that got even wider . . . And not everyone is in a position to absorb that.”

Ms Richardson has noticed more US technology companies hiring directly out of law school, giving recent graduates the chance to skip the law firm track altogether: “Ten years ago this was unheard of. But we’ve heard from some GCs they’d prefer to do their own training.”