Amal Clooney, Angelina Jolie and Gillian Anderson are all fans of this milliner’s fantastical bespoke creations

Anyone who saw Amal Clooney arriving for her civil wedding ceremony in Venice, hand-in-hand with George, will remember. Her wide-brimmed, white wool sunhat, trimmed with a slim navy ribbon to match her Stella McCartney jumpsuit, was one of those heartbreakingly romantic numbers, perfectly attuned to the place and occasion. The piece was the work of Justin Smith, who runs his small millinery atelier, J Smith Esq, out of Hackney’s Benyon Estate.

In a terrace of Victorian shops just north of Regent’s Canal, an area with a history of millinery trade, Smith’s plant-strung shop is adorned with mismatched mirrors and mannequins. There’s a black leather chair ready for fittings, and an imposing mahogany Indian daybed for accompanying shoppers. Head mannequins are topped with beaded ceremonial headdresses from Myanmar, and his own creations: a simple black felt fedora, brightly coloured feather summer hats, a chapeau cap swathed in ruby velvet.

Smith started out as a hairdresser – he was creative director of Toni & Guy before starting his own Soho salon. It was an evening class in hat design, leading to an MA at the Royal College of Art, that prompted his millinery career, and in 2007 he opened his own atelier. As well as bespoke commissions (about which he remains discreet), he has created pieces for Stella McCartney, Moschino, Vogue Italia and London’s Design Museum.

Much of his bespoke work is in film. It was Smith who created Angelina Jolie’s curvaceous black horns in Maleficent, Elle Fanning and Gillian Anderson’s dainty straw bonnets in Hulu’s The Great, and Emma Thompson’s draped turbans in Cruella. “The ‘anything is possible’ mindset of the film industry is inspiring,” he says. “I enjoy doing the research to get the hats right.”

In his work for private clients, he’s able to stretch his wings. “I start by looking at the client’s face shape, and then I think about the materials. When both of those are in place I like to come up with fantastical creations. I see it as a way of bringing out each person’s inner beauty and style.” These custom-made creations take between four and six weeks to create, starting at £695 for a tweed flat cap – and go up into the thousands.

Many of Smith’s fans had complained that there was no easy way to transport his delicate designs, which can involve feathers and fine netting. In response, he set out to reinvent the traditional hat box. Together with Richard Sharman of luxury bag brand Gladstn London, he designed a structured pyramid-shaped black leather bag (£1,350) that holds the hats vertically (each one can house several pieces), making them less bulky to transport. 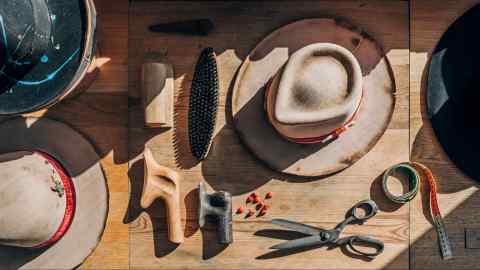 And he is about to launch a small capsule prêt-à-porter collection, consisting of three different shapes for each season: for summer, a cap, a visor and some occasionwear in silks and linens, and for colder months, a flat-brim trilby, a rolled-brim trilby and a fedora, each available in felt or leather (from £295). All are made in the same tradition as his bespoke designs: silk-lined and hand-finished in his atelier.

Part craftsman, part designer, part costumier, Smith is creating small pieces of wearable art from his east London studio. “They come from my heart and my head,” he says, “and then finally they emerge through my hands.”