Billions of dollars have flowed into “defensive” exchange traded funds in recent weeks, highlighting the jitters arising in some corners of Wall Street after US stocks have set a series of record peaks.

The resurgence in coronavirus infections in some US states, evidence of rising inflationary pressures and concerns that the Federal Reserve will soon start to scale back its vast asset purchasing scheme have already prompted some investors to adopt a more cautious stance.

US stocks came under selling pressure on Tuesday with the S&P 500 pulling back by about 1 per cent in afternoon dealings. The fall came after a round of disappointing data on US retail sales for July. Investors have been weighing whether the rapid spread of coronavirus and lower levels of government stimulus payments will begin affecting consumption, which accounts for about 70 per cent of America’s economic output.

The S&P 500 still remains up about a fifth for the year to date, having doubled from the lows hit during the market tumult of March 2020. At the same time, the index has gone almost 200 trading days without a 5 per cent pullback, according to Bank of America, one of the longest such streaks in the past half-century — a tranquil grind higher that has added fuel to a shift under the market’s surface.

ETFs linked to US defensive sectors that tend to perform well in tougher environments — healthcare, consumer staples and utilities — together attracted net inflows of almost $5bn in July after registering combined outflows of $3.6bn in the first half of 2021, according to State Street Global Advisors.

“The inflows in July went mainly into defensive sectors. That has continued into August with healthcare and utilities sector ETFs both taking another $1bn each in inflows so far this month,” said Matthew Bartolini, head of SPDR Americas research at State Street.

In contrast, ETFs linked to more economically sensitive US sectors — financials, materials, industrials, consumer discretionary, energy and real estate — all registered outflows in July that totalled $7.2bn. These six cyclical sectors had together gathered $57bn in the first half of the year.

Bartolini said evidence of a “bullish but worried” mood among investors was also evident in flows for smart beta ETFs, which aim to exploit long-term mispricings. ETFs that focus on so-called quality stocks with reliable earnings grabbed inflows of $21bn in July after posting outflows of $3.8bn in the first half of 2021.

Momentum ETFs, which buy equities with positive recent price trends, registered outflows of $856m in July, almost wiping out the inflows of $1.1bn gathered over the first six months of this year. Value ETFs, which buy underpriced stocks that tend to do well in periods of strengthening economic growth, notched outflows of $1.4bn last month after taking in $12.8bn in the first half.

Scott Chronert, an analyst at Citigroup in New York, said the economic recovery trade which ETF investors favoured in the first half of the year “seems to have lost its lustre” with a “more risk-off bias” evident in ETF flows in July.

US equity ETFs have registered inflows of about $250bn so far this year, providing fuel for the S&P 500’s record run. With the main US equity benchmark hitting a fresh all-time high this month, more investors are questioning just how much further the rally can run.

“Clients have felt there is nowhere else to go but into equities because bond yields are so low. But we are recommending that clients move to a more defensive position because returns from equities are likely to be lower and more volatile in the second half of the year,” said David Jones, a strategist at BofA in New York.

A BofA survey of investors with $702bn in assets under management highlights these concerns: expectations that the world economy will continue improving slumped in August to the lowest level since April 2020.

Tobias Levkovich, Citigroup’s chief US equity strategist, said US companies had delivered “shockingly good” results. However, investors are growing more anxious about whether US groups can meet the high bar set in the second quarter. The BofA fund manager survey indicated optimism over corporate earnings had eased, while investors now expected profit margins to decline — something they had not forecast since last summer.

“Few [investors] think there is anywhere to go with new money other than to equities at this juncture. [But] we suspect that the combination of higher US taxes, potentially more persistent inflation, Fed taper talk and possible margin compression all support the probability of a correction,” said Levkovich. 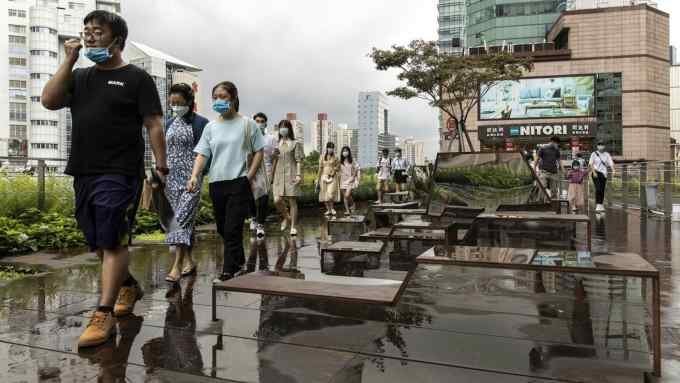