Africa Finance Corporation, a pan-African infrastructure bank, plans to shift its energy portfolio towards greener projects in a bid to attract greater interest from institutional investors, according to its new chief investment officer.

Sameh Shenouda, who on Monday will join the Lagos-based bank from Blackstone-owned energy group Zarou, said the AFC board had agreed to a plan to bundle new and existing solar, wind and hydro projects in several African countries into a new unit, with combined generating capacity of 1-2 gigawatts of renewable energy. That unit could eventually be separated out and floated on the London Stock Exchange, he said.

“This is an area a lot of European investors and oil companies are going into, but they haven’t cracked Africa yet,” Shenouda said.

Investors were interested in opportunities in green energy on the continent, he said, but were unable to spend time scouting out relatively small 50-60 megawatt projects. “So we will deliver an opportunity that gives them higher returns and access to a market they haven’t cracked yet.”

Climate change
Climate graphic of the week: the Great Green Wall scales up 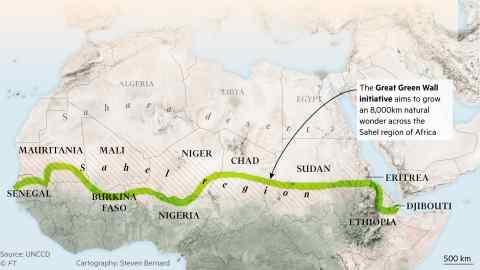 An investment-grade rated bank, it has sought to attract funding from a wider pool of investors, raising money in several Asian markets including China, Singapore and Malaysia. In December, the US International Development Finance Corporation provided $250m of funding to strengthen the bank’s capital base. Nigeria’s central bank holds a 42 per cent stake.

Aubrey Hruby, co-founder of the Africa Expert Network and an investor in African start-ups, described the AFC’s tilt towards a green strategy as “good news”. However, she cautioned that many funds were looking for similar opportunities.

“The new climate focus across the financial world will probably mean a surplus of capital chasing limited bankable deals in green energy on the continent,” she said.

In the past, the AFC has expressed caution about embracing the shift towards green energy because much of Africa has a woeful infrastructure deficit. In the AFC’s own home base of Nigeria, only about half of homes have access to electricity. A recent investigation found that congestion at a Lagos port was so bad, it cost as much to get a truck through the city as it did to ship the same goods from China.

“We have to be a little careful of not trying to accelerate this carbon issue so fast, so hard, that you start stifling Africa’s development,” Sanjeev Gupta, executive director for financial services at AFC, told Investors Chronicle recently. “Projects that meet all the criteria around which green financing can happen, there are still not that many, it’s not that easy, and not that cheap [to develop them].”

Shenouda said the bank had done many power projects, but not enough in renewable energy. “We will always find fossil fuels in the mix, but now the challenge is how to get to 20 per cent of your capacity from renewables,” he said.

He disagreed that renewable projects were expensive, saying that solar and hydropower were the cheapest source of power in Africa, with little or no running costs. The Red Sea region was particularly suited to wind energy because of its wind patterns, he said.

AFC has already invested more than $60m in a wind power project in Djibouti in the Horn of Africa. The bank was looking at renewable energy opportunities in Nigeria, Ivory Coast, Madagascar and Mozambique, he said.