As Art Basel prepares to open its Miami fair next week, organisers are keen to scotch any rumours about its Hong Kong event that could otherwise dominate the stateside proceedings. Whispers in the art dealing community were that the increasing unrest in Hong Kong meant that the Art Basel fair there, due to run between March 19 and 21, looked likely to be cancelled or moved — Singapore and Taipei were mooted as alternative venues.

Art Basel denies any such considerations. A spokesperson acknowledges the “tumultuous time” but says, while it is “impossible to predict today what the situation will be like in March”, there are “no plans to relocate or cancel our 2020 show”.

It seems unlikely, though, that organisers aren’t mindful of the fact that, as the protests heat up, other events have had to take a step back. Art world cancellations last week included at Lévy Gorvy’s Hong Kong gallery, which opened only this year, and has postponed an exhibition of the Chinese artist Tu Hongtao that was due to open on November 22.

Hauser & Wirth has also paused plans for a show of the photographer Annie Leibovitz in its H Queen’s gallery in Hong Kong that was due to open at the same time. Brett Gorvy, co-founder of Lévy Gorvy, says that, “It is our heartfelt desire to give [Tu] and his extraordinary paintings the debut that they deserve,” and that his show will be rescheduled “soon”. Iwan Wirth, president of Hauser & Wirth, says his gallery is “dedicated to continuing with our activities while remaining sensitive to the situation in the city at a given moment”, pointing to “the safety of our visitors, our team and our artists”.

Despite the turmoil on the streets, Hong Kong’s autumn season of six evening sales of postwar and contemporary art performed better than last year by 52.9 per cent, according to analysts at ArtTactic. Higher value works, as ever, skewed the totals, notably by the Chinese-French artists Sanyu and Zao Wou-Ki, while a painting by Yoshimoto Nara — “Knife Behind Back” (2000) — astonished the market by selling for HK$196m (US$25m) at Sotheby’s.

This season, demand also grew for a new generation of western contemporary artists, including Genieve Figgis (b1972, Dublin) at Phillips, Eddie Martinez (b1977, Connecticut) at Christie’s, and Nicolas Party (b1980, Lausanne) at Sotheby’s.

Christie’s Hong Kong evening auction of 20th-century and contemporary art on November 23 didn’t quite have the swagger of Sotheby’s equivalent sale last month, but squeaked within its HK$703m-HK$1.2bn estimate to make HK$749m (US$96m; HK$881m with fees). Its top lot, Sanyu’s “Five Nudes” (1950s), just beat its low estimate and sold for an impressive HK$266m (US$34m; HK$304m with fees), a record for the artist.

Anders Petterson, founder of ArtTactic, notes that 74 per cent of bids at Christie’s came by phone or online, perhaps explaining the relative health of auctions in Hong Kong.

Stuart Shave is due to open a third space in London for his gallery Modern Art next year, this time in Mayfair (his other spaces are in east London). “It may seem to be about expanding but is in fact about slowing down,” Shave says. His plan is to focus on “making exhibitions in the galleries” rather than, for example, exhibiting at as many art fairs. “If I did one fewer fair a year it would probably make up my Mayfair rent,” he says.

His new home will be in 1,200 sq ft on the ground and lower ground floors of a building in Bury Street, close to Christie’s. The gallery’s smaller size was part of its appeal, Shave says, as his other spaces — at 6,000 sq ft (Vyner Street) and 5,000 sq ft (Helmet Row) — have a more blockbuster feel.

“There’s a potency to smaller exhibitions,” Shave says. His opening show, slated for March, will be for the expressive Viennese artist Martha Jungwirth, who turns 80 next year. Jungwirth worked for a long time in the shadow of her husband, Alfred Schmeller, who was director of the 20er Haus museum (now Mumok) and who died in 1990. The painter Albert Oehlen has been among those to champion Jungwirth in recent years. Shave brings two of Jungwirth’s paintings to Art Basel Miami Beach this week: a large watercolour, “Ohne Titel” (1994, €75,000), and a new oil, “Danae” (2019, €63,000).

The market for Russia’s 20th-century avant-garde artists is riddled with forgeries and faked provenances, so when a legitimate painting, with a secure history and powerful image, comes for sale, it is snapped up. Such was the case with Ivan Kliun’s “Spherical Suprematism”, made in the first half of the 1920s, which sold to a telephone bidder for £4.1m at Sotheby’s in London on November 26 (£4.9m with fees; estimated at £2.5m-£3.5m, with a guarantee). It’s a record, by some degree, for Kliun (1873-1943), who is a household name in Russia and was a close friend of Kazimir Malevich (1879-1935) but is less known on the international circuit.

The painting was originally owned by a celebrated collector of the Russian avant-garde, George Costakis (1913-90), who made it his mission to rediscover hidden works that had been deemed noncompliant by Joseph Stalin. Sotheby’s catalogue recalls that Costakis “tracked them down in dusty corners of commission shops and from the surviving artists and their descendants”. These works included Kliun’s “Spherical Suprematism”, which Costakis bought from the artist’s daughter.

A Greek national born in Moscow, Costakis struck a deal to leave Russia in 1977, donating half of his collection to the State Tretyakov Gallery. “Spherical Suprematism” stayed with Costakis when he emigrated — the work has a Soviet export permit stamp on its reverse — and he kept it until 1983, when it was sold at Sotheby’s for £220,000 (the equivalent of nearly £800,000 today). Reto Barmettler, head of Sotheby’s Russian pictures department, describes its provenance as “the best you could imagine” and confirms that the work also underwent extra scientific analysis prior to its sale.

Kliun’s painting was the top-priced of 158 offered lots in this week’s Russian pictures sale. In total, the auction made a within-estimate £11.9m (£14.5m with fees), nudging ahead of last year’s equivalent total — including fees — of £13.4m.

London’s billboards are digitally displaying more art than usual, as part of a climate change awareness campaign run by the renewable energy arm of Octopus Group and Artfinder, a venture-capital backed online marketplace. Called “Portraits from the Precipice”, the works in the project respond to climate change and are looming large in public places, including train and tube stations (until February 2020). Five artists at a time will rotate for two weeks each; currently on view are works by Lena Smirnova, Neha Soni, DB Waterman, Angelo Nataraj Saka and Andrea Vandoni. The plan is to roll the project out to Leicester and Brighton, where Octopus Energy also has offices.

All the shortlisted works are also available to buy on Artfinder’s website — Soni’s watercolour of a lion in a burning forest is £139, while Vandoni’s painting of two women wearing gas masks is £4,286. Artfinder’s usual sales commission of 33 per cent will be donated to the charity Renewable World, while Octopus Energy is supplying a £10,000 prize for the best entry, to be judged by an Artfinder panel at the end of the run.

Explore the series
READ MOREMiami Art Week 2019
Alexandre Noll: the reclusive designer and furniture maker is finally under the spotlight 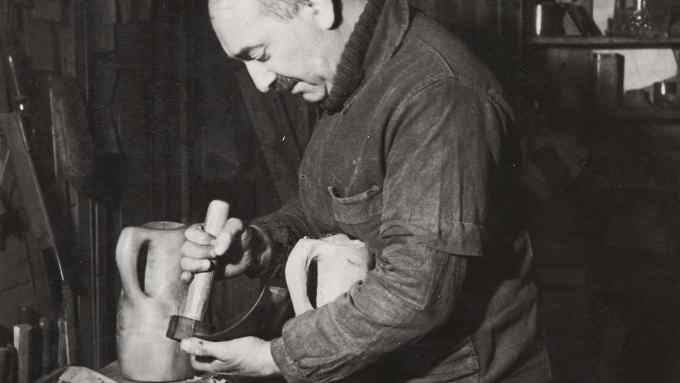