Sign up to myFT Daily Digest to be the first to know about International Monetary Fund news.

A decision by Britain to leave the EU would result in a “negative and substantial” hit to the economy, “permanently lower incomes” and harm the economies of other European states, the International Monetary Fund has said.

In the short term, a difficult exit could push the economy into recession next year and even a relatively smooth transition would have a “material impact”

In the longer term, the damage caused by an extended period of uncertainty and the likely higher costs of trade would be sufficient to wipe out any gains from reduced contributions to the EU, the IMF concluded.

The bleak verdict is a last throw of the dice for the international economic establishment which has been united in its warnings about the risks of Brexit.

In a sign of the concern sweeping capitals as the Leave campaign edges ahead in the polls, Finland’s outgoing finance minister Alexander Stubb, told the FT he feared this could be “the Lehman Brothers moment of Europe”.

“It’s absolutely clear that there would be economic mayhem if the UK were to vote out,” Mr Stubb said.

Central bankers around the world are on standby for the fallout, with British, Swiss, Japanese and European policymakers warning on Thursday of the risks of uncertainty and turbulence.

The Bank of England said it would “take whatever action is needed” to maintain stability, adding that Brexit was now possibly the biggest risk to global markets.

International organisations, including the OECD and the World Bank as well as a plethora of domestic think-tanks, including the Institute for Fiscal Studies, have lined up to warn of the consequences.

The collective view was encapsulated by IMF head Christine Lagarde last month when she warned the impact of Brexit ranged from “pretty bad to very, very bad”.

On Thursday, the IMF published its final assessment of the economic consequences of a vote to Leave, which included new modelling from its economists.

Even in the IMF’s most favourable scenario — in which the UK retains access to the single market and both business and household uncertainty dissipates quickly — gross domestic product will be 1.4 per cent lower by 2021

In the Fund’s adverse scenario — in which negotiations with the EU do not proceed smoothly and the UK falls back on World Trade Organisation rules — GDP is 4.5 per cent lower.

Any reduction in GDP greater than 1 per cent would be enough to wipe out the gains from reduced contributions to the EU budget, the IMF said.

In a section of the report dedicated to the question of EU membership, the IMF knocked down Leave campaign promises that the UK economy could make big gains from deregulation post Brexit.

The UK is “already relatively lightly regulated”, it said, adding that it scores poorly in areas that are domestically-controlled, such as planning.

The IMF noted that even if it was possible to deliver the £8bn of annual savings from regulation the Leave campaign has focused on, the savings would be “outweighed” if the losses in trade and related income arising from reduced access to the single market access were larger than 0.5 per cent of GDP. 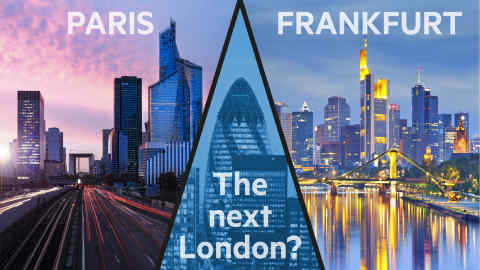 The International Monetary Fund is known to be preparing contingency plans for a Brexit vote. Gerry Rice, the IMF’s spokesman, said that while the decision was the prerogative of the British people, “it’s a core element of our remit” to think about risks and “policy measures to reduce or respond to them”.

It added that eurozone members that had close links with the UK in trade and finance would be worst hit by Brexit, naming Ireland, Malta, Cyprus, Luxembourg, the Netherlands, and Belgium as those most likely to suffer.

The IMF said economic forecasts had highlighted “a repricing of risk”, sparking falls in asset prices as investors dumped riskier assets for safer ones, as a possible risk to peripheral economies in the region.

“It is unlikely that any EU economies would gain from the UK’s exit,” it noted.

There is the possibility though that Eurozone member states could benefit from the relocation of financial services jobs from London and other UK financial centres to cities such as Frankfurt and Paris.

Additional reporting from Jim Brunsden in Brussels, Claire Jones in Frankfurt and Shawn Donnan in Washington