Code gives Abe a rare reason to be cheerful

Governance and stewardship reforms have been successful

When Japan’s corporate governance code was being draft­ed in early 2015, one of its authors, Scott Callon, said out loud what everyone else was thinking: conservative, opaque and intransigent corp­orate Japan would never ac­cept such a radical document.

His observation was met with deafening silence.

Both the June 1 launch date and the code itself were orders from the very top. This was a critical strut of prime minister Shinzo Abe’s “Abenomics” campaign to revitalise the Japanese economy, Mr Callon was told by one of the senior members of the committee, and a non-negotiable piece of the reform agenda. If Japan Inc did not like it, tough.

The governance code, and the associated stewardship code that defined the new responsibility of shareholders, remains for many observers one of the most unambiguous successes of Abenomics. The codes were introduced as part of the wider Abenomics effort to boost the performance of the Japanese stock market, encourage companies to increase capital expenditure and tempt citizens to shift part of their bank savings into riskier assets.

Progress on compliance has not been as fast as the original proposers of the code had hoped, and more broadly political momentum is flagging, but it is nevertheless highly visible. Some 80 per cent of large and midsize Tokyo-listed companies now have two or more independent directors — a tenet of the governance reforms — up 21 percentage points from the year before the code was introduced.

The number of listed companies that have established nomination committees to determine top executive positions has expanded more than eightfold since 2014 to 475. Companies that had never publicly uttered the phrase “return on equity” now feel under pressure to highlight that metric in their annual reports. Share buybacks have surged since the code came into force, and by the end of July had already surpassed the total for the whole of 2015.

Levels of shareholder engagement are also rising. According to Mitsubishi UFJ Morgan Stanley Securities, a financial services company, shareholders objected to the re-election of management in 26 cases this year, three times as many as the year before.

Perhaps the two codes’ greatest impact, said analysts at Nomura in a report published in August, has been to create “evolutionary shareholder activism” — not the adversarial style of activism that generated such a bitter corporate backlash in the 2000s, but the emerging expectation that companies and investors will “build amicable relationships marked by constructive tension”.

Nicholas Benes, head of the Board Director Training Institute of Japan, was the original proposer of a corporate governance code to the Abe government. He says that what the stewardship and corporate governance codes have done — and where some of the more tangible evidence of change is emerging — is in giving investors an accepted “language” with which to talk to companies and to express concerns or raise governance issues.

“In the past, investors that did this [feared] they might be labelled ‘activists’ and companies could avoid meetings and shut down information access,” he says. “The corporate governance code means they can’t easily do that any more — if the investor wants to ask those questions, he just uses the language of the code to ask how compliant they really are, or what alternative practices they employ.” 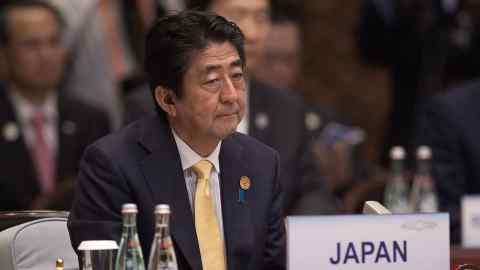 For some, the success of the governance code is an anomaly in an Abenomics programme now largely on the ropes. More than 18 months since the code came into effect, the broader environment in Japan has changed — in many ways for the worse. Mr Abe’s administration, though buoyed by a July victory in Upper House elections, seems less bulletproof than it did when the code was brought in.

The global economy is not providing the following wind it once did, and structural reforms are taking longer than the government hoped to crystallise into real change. Meanwhile, the Bank of Japan’s decision in January to introduce negative interest rates to the world’s third-biggest economy looked desperate to analysts and investors.

Despite the strength of the Tokyo stock market — up 60 per cent since Mr Abe came to power — it has become fashion­able among Japan-watchers to highlight the many metrics by which Abenomics and the accompanying monetary easing policies of the BoJ are stuttering. The failure to free Japan from deflation permanently is foremost among those.

These firms may be publicly singled out as bad examples. This is where the shame aspect of Japanese society is very helpful

There is also scepticism on the true success of the corporate governance code. While many companies have signed up to the code, and even introduced their own guidance statements to signal their compliance with its spirit, Japanese companies have a long history of disguising opposition to ref­orms with superficial consent.

But the governance code may have produced sufficient environmental change to offset that, says Mr Benes, who adds that companies that just pay lip service to the code and produce only a few short sentences to describe how they comply with the code are “walking into a trap”.

“They are opening themselves up to potential criticism from shareholders, analysts and the media that they need to have real substance and policies to show before they brag about ‘full compliance’. That is how codes work,” he says.

Companies will be expected to satisfy the spirit of the code, Mr Benes adds. “In this sudden­ly transparent market, these firms may be publicly sing­led out as bad examples, for saying they comply when they are not really compliant,” he says. “This is where the shame aspect of Japanese society is very helpful.”

Integrated reporting at the heart of Japanese success / From Richard Howitt