The three clear threats to limits on nuclear arms control

In March the UN’s nuclear non-proliferation treaty will mark 50 years in force. During and after the cold war, it has been one of the most successful arms limitations agreements of the modern age. But it has never been watertight, and celebrations of the treaty’s 50th anniversary are sure to be muted.

In a world of increasing great-power rivalries and muscular regional nationalisms, three trends stand out.

The first is the slow, seemingly unstoppable unravelling of nuclear arms control accords reached between Washington and Moscow over five decades.

If the US and Russia do not negotiate a replacement for the New Start treaty, which reduces each side’s strategic nuclear arsenals and is due to expire in February, there will be no legally binding limits on their stockpiles for the first time since 1972.

The second trend is competition among the nine known nuclear-armed states, all of which are spending large sums on modernising their arsenals. These are: the US and Russia, which own more than 90 per cent of the world’s nuclear weapons, China, France, the UK, India, Pakistan, Israel and North Korea.

The third trend is the emergence of tensions around new or aspiring nuclear powers, such as, respectively, North Korea and Iran. The current near-breakdown of a 2015 pact under which Iran agreed to limit its uranium enrichment stockpiles and activities is the object of particular concern.

All three trends cast a shadow over the prospects for non-proliferation.

President Donald Trump pulled the US out of the Iran pact in 2018, stating that “the heart of the Iran deal was a giant fiction — that a murderous regime desired only a peaceful nuclear energy programme”. US-led sanctions and rising animosity between Washington and Tehran have prompted the Iranians to embark on what Richard Haass, president of the New York-based Council on Foreign Relations, calls “a slow but steady process of getting out from under many of the agreement’s limits”.

Mr Haass detects a risk that “Iran’s actions will lead the US, or more probably Israel, to undertake a preventive strike designed to destroy a significant part of its programme”.

The most ambitious effort to abolish nuclear arms is the Treaty on the Prohibition of Nuclear Weapons, an initiative of Brazil, Mexico, Sweden and other non-nuclear states. Some 122 countries approved the treaty in 2017, and more than 30 have ratified it. The treaty will have legal force if 50 states complete the ratification process.

However, the treaty’s value is diminished by the fact that the nine nuclear states — and all Washington’s European allies — have refused to endorse it. They criticise the initiative as unrealistic political posturing that could undermine the non-proliferation treaty that came into effect in 1970.

As Shannon Kile of the Stockholm International Peace Research Institute noted in 2017, long-term modernisation programmes are under way in all nine states: “This suggests that none of these states will be prepared to give up their nuclear arsenals for the foreseeable future.”

The partial success of the 1970 treaty rested from the beginning on its implicit acceptance that nuclear weapons were here to stay. While non-nuclear signatories agreed not to acquire nuclear arms, the US, the Soviet Union, China, France and the UK agreed to pursue nuclear disarmament and share the benefits of peaceful nuclear technology.

Mr Haass says the treaty has proved “quite robust, in part because it is buttressed by efforts to prevent the export of critical technologies, arms control, sanctions and the strength of alliances, which reduces the need for countries to become self-reliant”.

Nonetheless, the treaty’s disarmament element has rarely looked in worse shape. China has never been party to any nuclear arms reduction accord. In official and academic Russian circles, the cold war concept of mutual deterrence is regarded as preferable to efforts at building a nuclear-free world.

“It would be advisable to . . . shift the emphasis in common policy towards the strengthening of mutual nuclear strategic deterrence, which, regardless of its flaws, was the main factor of peace in the past and will be even more so in the foreseeable future,” argued Sergei Karaganov and Dmitry Suslov, two prominent scholars, after a conference last year at the Russian foreign ministry.

Over the past half-century, however, neither mutual deterrence nor the 1970 treaty has proved enough to stop some countries launching nuclear weapons programmes. Libya and South Africa voluntarily gave them up. Iraq and Syria were stopped by Israeli force. But India, Pakistan and Israel never accepted the treaty, and North Korea ignored it.

One of the main risks ultimately is this: if the North Korean and Iranian programmes are not brought under control, neighbouring countries that feel threatened will one day acquire nuclear weapons of their own.

Get alerts on Nuclear proliferation when a new story is published 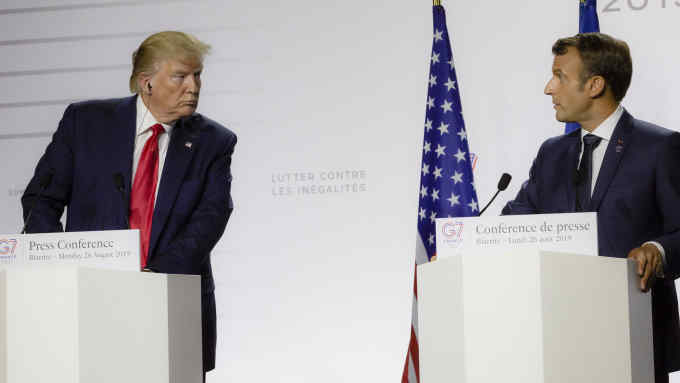