Jonathan Wheatley in London and Michael Pooler in São Paulo

It is almost exactly 20 years since China joined the World Trade Organization as a $1tn economy. Since then, China’s economy has grown to almost $15tn, unleashing a wave of prosperity in developing countries that helped lift more than 1bn people out of poverty.

But now a crisis in China’s property sector, as manifest in the financial problems of developers Evergrande and Fantasia, has many worried that China’s near-insatiable demand for raw materials, which long proved a potent engine of growth for emerging economies, has run out of steam.

“China’s property sector is right at the end of a boom period. That is negative news . . . particularly for countries that have ridden the coattails of that boom,” said William Jackson, chief emerging markets economist at Capital Economics, who expects that the commodity power houses of Brazil and South Africa will be hit especially hard.

For now, that prospect may look unlikely, given the supply shortages that have pushed up the prices of many commodities.

Food prices are near a decade high. Fears the global energy crunch will hit the production of metals last week pushed up the price of copper, zinc and aluminium to more than ten-year highs. There is also the prospect of trillions of dollars spent on the green transition, prompting some investors to foresee a new commodity super cycle.

To move the world to net zero emissions by 2050, for example, could provide a $14tn windfall for producers of copper, nickel, cobalt and lithium alone, the IMF calculates. In Russia, the surge in metals prices helped drive the country’s current-account surplus to a record $40.8bn in the third quarter.

“The fact that commodity prices are high is helping where you’d expect it to help, by supporting the guys that export this stuff,” said David Hauner, emerging market strategist and economist at Bank of America. “But other things are happening as well.”

Arguably the biggest factor is the slowdown in China’s property sector, which accounts for an estimated 30 per cent of the country’s annual output. Chinese economic growth fell to 4.9 per cent in the third quarter of this year, versus 7.9 per cent in the previous quarter.

“China’s poor September figures reflect supply-side constraints, but of greater concern is the weakening demand side due to a deepening property downturn,” Gavekal Dragonomics wrote to clients on Monday.

Construction alone accounts for about half of China’s steel consumption, and iron ore prices have almost halved since late July when Evergrande’s problems intensified.

“A long and drawn-out transition for China’s property sector lies ahead,” Larry Brainard, chief emerging markets economist at TS Lombard said. “This points to a reversal in the bullish commodity price outlook that has favoured some emerging markets.”

The mining industry, which is at the sharp end of any structural drop in demand, is putting on a brave face so far. Mark Cutifani, chief executive of mining company Anglo American, said authorities in Beijing were dealing with issues in the property sector in a responsible way.

“There is no doubt in the world that China needs to grow to make sure society keeps going forward in a productive and constructive way, and I know the Chinese government is well aware of those pressures,” he said. “But the next few months are going to be a bit noisy.”

The problem may be particularly acute for the commodity rich countries of Latin America, especially Brazil, as China is its largest single trading partner and a major destination for its mineral and agricultural exports.

Sérgio Vale, an economist at consultancy MB Associados in São Paulo, believes the biggest impact from Evergrande will be on specific companies rather than the Brazilian economy as a whole. The share price of Vale, Brazil’s largest iron ore company, has fallen 16 per cent this year.

Even so, Vale, the consultant, sees the slump in iron ore prices dragging on Brazil’s trade balance this year. While forecasters had predicted a trade surplus of up to $100bn earlier in 2021, consensus estimates have since been pared back to about $65bn.

Meanwhile, emerging economies are suffering from the more immediate rise in global food and energy prices. That is particularly worrisome for developing countries, where spending on staples takes up more of household consumption than in the rich world.

As a result, many emerging market central banks have increased interest rates, some of them aggressively — as in Brazil, Chile and Russia — putting a brake on growth. 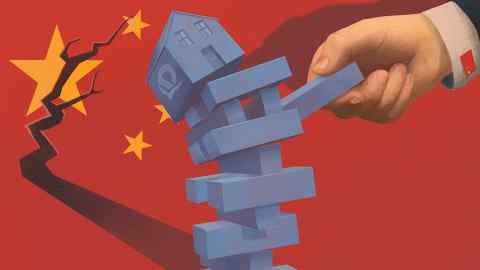 Still, it is future prospects for commodity demand that has analysts worried. That is especially so given that Beijing’s “common prosperity” agenda seeks to shift the economy away from construction-led investment and towards consumption.

The effect of that shift may be profound. According to the IMF, China delivered 28 per cent of all global output growth between 2013 and 2018. If China’s property sector accounted for a third of that, the sector was responsible for more than 9 per cent of worldwide growth worldwide over that period.

“I find it bizarre that people talk about global inflation in the context of container prices and ships being in short supply, as if these changes will be permanent,” said Bhanu Baweja, chief strategist at UBS and an emerging markets veteran. “Yet nobody is talking about the biggest contributor to global growth.”