Beyond lithium — the search for a better battery

We’ll send you a myFT Daily Digest email rounding up the latest University of Manchester news every morning.

As the world’s power needs grow, the search is on for better battery technology — not just to keep smartphones charged for longer, but to run electric cars and to store energy produced by solar and wind power.

For the last 25 years, the lithium-ion battery, has held sway. Packing a large amount of energy into a relatively small space and weight, these are in greater demand than ever for mobile phones and electric cars. In fact, 2017 has been, in the words of HSBC’s Paul Bloxham, a nirvana for lithium. The price of the commodity has been driven 240 per cent higher. Batteries accounted for 35 per cent of lithium use in 2015, up from 25 per cent in 2007, with electric vehicles, phones and personal computers accounting for 60 per cent of that market.

Lithium-ion’s limitations are apparent, however, to anyone who has seen their mobile phone battery draining suddenly. There is a growing interest in finding alternative technologies.

Samsung in November revealed that it had developed a technology based on a “graphene ball” that could potentially boost its battery capacity by 45 per cent and increase charging speed five-fold. Keen to put behind it the memories of the exploding batteries in its Galaxy Note 7 phone, Samsung has been putting a lot of effort into battery research, and news that the graphene-based power unit would take just 12 minutes to be fully charged was welcomed by many.

Yet the technology, similar to Qualcomm’s Quick Charge system, really only represents an enhancement, rather than a replacement, for lithium-ion.

Graphene has long been seen as a vital ingredient for future energy needs. Other alternatives being researched include fuel cells, photosynthesis, solid state technologies, sodium-ion, solar, foam, aluminium graphite, sand and even human skin. Many of these have the advantage of being either safer or more abundant than lithium, the production of which is dominated by a handful of companies.

However, research in these technologies largely remains in the labs with little sign of a full commercialisation on the horizon. Hydrogen fuel cells, first invented in the 1830s, have long been seen as the most viable alternative to lithium batteries. Yet the technology has been held back by high material costs since the 1990s heyday of hydrogen development. There has been some headway in harnessing hydrogen as an alternative power source but the ultimate aim is to use fuel cells to overhaul the transport market. Japan is leading the way with Toyota and Honda both pushing to develop the technology.

Yet it remains a tough task. Intelligent Energy, a UK fuel cell company linked with developing the technology for use in smartphones, was quietly sold in October to one of its investors after admitting that a sales collapse risked leaving shareholders with little, or no, value.

One area where there is a pressing need for battery innovation is in the emerging market for wearable technology. A rigid battery would not work in emerging areas such as smart clothing so academics have been developing more flexible models. Researchers at the University of Manchester in August revealed that they had developed technology using graphene-oxide to create an ink-like substance that can be printed on to fabrics. The ink, which is as flexible as cotton, acts as a solid-state flexible supercapacitor that can rapidly charge electronic components.

Dr Nazmul Karim, a fellow at the National Graphene Institute, said the breakthrough was a significant step in the development of new types of charging. “It will open up possibilities of making an environmental friendly and cost-effective smart e-textile that can store energy and monitor human activity and physiological condition at the same time,” he said.

One Dutch company, meanwhile, has created a sustainable battery using only water and salt. AquaBattery has developed a system that involves brackish water flowing through a stack of membranes to store energy. The first ‘Blue Battery’ pilot project began in November in the Dutch city of Delft to prove that the system, which converts electrical energy into chemical energy, is as scalable as AquaBattery argues.

Mei Nelissen, part of the team that initially worked on the Blue Battery concept, said in a Ted X talk that she was “dancing like we had discovered fire” when it proved the system could work, as it opened up the possibility of solving one of the main conundrums facing the renewable energy industry — storing energy for use when the wind does not blow and the sun does not shine.

That remains the challenge for the battery market. Demand is growing exponentially in the here and now, particularly in the smartphone market where consumers are familiar with ‘red zone panic’ when their handset runs out of power.

The Blue Battery won the ‘circular economy’ award from Accenture in October but the system remains a long way off commercialisation.

Paul Lee, head of technology, media and telecoms research at Deloitte, says he does not expect change any time soon. “Over the next five years, lithium-ion is likely to remain the basis of almost all batteries used in smartphones. At present there appear to be no battery technologies on the horizon that have evolved sufficiently to be tested and factored into supply chains that could displace lithium ion.”

This article has been amended to reflect the fact that although Mei Nelissen has worked on the Blue Battery concept she is not a co-founder of AquaBattery. 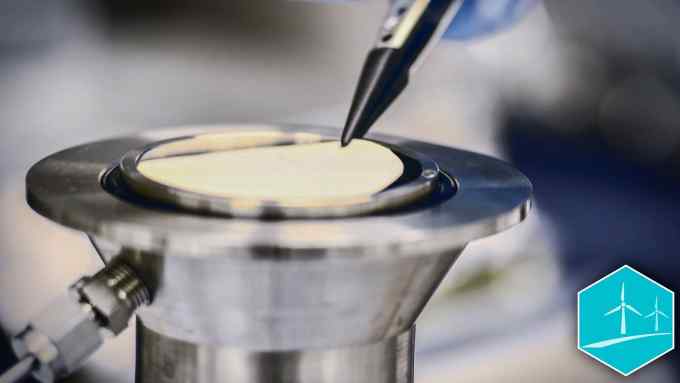