Drugs for rare diseases have become big business in recent years. That is because they have been able to command very high prices — often hundreds of thousands of dollars a year per patient — even as cash-strapped healthcare systems try to crack down on costs.

Drugmakers must charge a lot, they say, because rare or “orphan” drugs target conditions that each affect fewer than 200,000 people — so they must recoup their outlay from far fewer patients. In the US, it has also been possible for drugmakers to resist pressure from insurers to lower prices because of the very small customer base, which means that the aggregate cost to health insurers has been low compared to drugs for more common conditions such as cancer and hepatitis.

There are signs, however, that the US is starting to take its cue from European countries, which tend to drive a much harder bargain when setting prices of orphan drugs — and sometimes refuse to pay altogether.

The Belgian health ministry in 2013 found itself in a row over its refusal to pay for the medicine Soliris for a seven-year-old boy suffering from an uncommon kidney disease. It eventually agreed to foot the bill after negotiating a discount from the drugmaker, Alexion, which has listed the medicine at a price of almost $700,000 a year in the US

In December 2016, Biogen, the US biotech group, secured regulatory approval for Spinraza, a first-of-its-kind drug for spinal muscular atrophy (SMA). The rare disease affects nerve cells in the spinal cord and robs sufferers of their ability to walk, eat or breathe.

The company launched the product last month with the hefty price tag of $125,000 per injection, which works out at roughly $750,000 for the first 12 months of treatment and $375,000 per year thereafter. But several large insurers responded by restricting access to the drug, with the insurance companies Humana and Anthem insisting they would only reimburse payment for the drug for babies.

Geoffrey Porges, a biotechnology analyst at Leerink, an investment bank, has predicted that Spinraza could be “the straw that breaks the camel’s back in terms of the US market’s tolerance for rare disease drug pricing”.

Other analysts predict the insurers will not be able to resist paying for Spinraza for long, however, especially if Biogen releases more clinical proof in support of its drug. “We continue to expect coverage to play out as more restrictive . . . but see a reasonable likelihood for [insurance] coverage expansion over time following the release of additional data,” says Brian Abrahams, analyst at Jefferies, the investment bank.

The Institute for Clinical and Economic Review, a non-profit that evaluates drug prices, says working out the value of medicines for rare diseases is extremely difficult because of “the tension between the goals of patient access, affordability and sustained innovation”.

Michel Vounatsos, chief executive of Biogen, admits it is “sometimes not easy to assess the right price point for a product like Spinraza”, but insists the company is being fair. “The value of the product speaks for itself,” he says. “Some are talking about a miracle drug — before there was no product, no hope, no treatment.”

Mr Vounatsos says Biogen “looked through three main lenses” when deciding on the price. First it considered the value of the medicine for patients who have no other options. Then it tried to work out what privatised and public health systems would be able to afford. “The third element was return to our shareholders,” he says.

But insurers have shown themselves to be less willing to pay for some rare disease drugs — even when well-organised groups of patients unite and campaign for access. Another controversy broke out last year when Anthem refused to pay for a new drug, Exondys51, for Duchenne muscular dystrophy, a rare childhood muscle wasting disease.

The drug, made by rare diseases group Sarepta, was approved by the US Food and Drug Administration last year, but only after an internal battle at the regulator, which resulted in one of its scientists leaving. Some of the FDA’s employees did not want to approve the drug because they thought there was scant evidence that it worked.

Sarepta’s regulatory submission was based on a trial of just 12 patients — a tiny sample even by the standards of most rare disease studies. Anthem agreed with the doubters, describing the drug as “investigational and not medically necessary”. 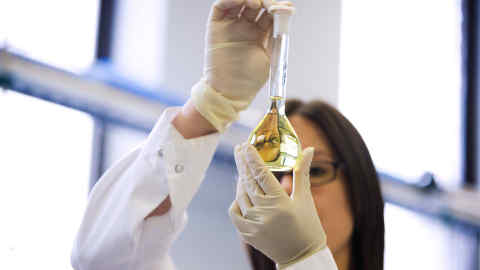 “The clinical benefit of treatment for DMD with Sarepta’s [drug] has not been demonstrated,” Anthem said, in a statement published in October.

The insurer’s decision caused uproar among parents of children with DMD and was described as “shameful” by Patients Rising, an advocacy group.

“A life-saving treatment can take years to be discovered. Then it takes more time — years, even decades — to go through clinical trials,” it said in a blog post. “Sadly, that approval means nothing if your insurance company denies you access to the right treatment.”