The TTIP has missed its political moment

With a packed political calendar in the EU and US, it is likely talks will enter a deep freeze

When US President Barack Obama landed in Germany in April he had one major economic goal on his mind: to inject more urgency into transatlantic trade negotiations that still appear a long way from a successful resolution three years after they were launched.

Together with Germany’s chancellor, Angela Merkel, the president called for a push to bring a successful close to the negotiations by the time he leaves office next January. And, for a moment there, he had a right to feel optimistic.

But it hasn’t taken long for the mood around what is formally known as the Transatlantic Trade and Investment Partnership (TTIP) to sour.

Within days, the French trade minister, Matthias Fekl, was effectively calling for a suspension of the talks, arguing that they were unlikely to succeed anyhow. Soon after that, a leak of negotiating texts illustrated just how far apart the US and EU remained on key issues, inciting another round of vitriol from the pact’s opponents in Europe.

These two codas to Mr Obama’s European tour illustrated a very simple point. The reality is that there is a very good chance that what would be the biggest bilateral trade deal in history — and one among two of the world’s biggest economies — has missed its political moment.

It is hard to look at the political calendar on either side of the Atlantic and to see the window for a deal these days.

In the US, this year is being consumed by presidential politics, with Donald Trump, the presumptive Republican nominee, building his campaign on an antitrade message and Hillary Clinton, his most likely Democratic rival, raising her own concerns. Just as it is hard to see the EU and the US closing the gap on vital points of dispute such as the proper labelling of feta cheese, it is difficult to envision Mr Obama’s successor feeling much enthusiasm for trade agreements of any kind after the election.

In Europe, protesters are taking to the streets against the agreement, while populists on both the right and the left have it in their sights as an easy proxy for both suspicion of Brussels and a thinly-veiled anti-Americanism.

Then there is the election calendar. Beyond the June referendum in the UK on EU membership lie 2017 polls in France and Germany, with both Ms Merkel and François Hollande, the French president, already under assault at home. Then there will be the US midterm elections in 2018, the European Parliament elections in 2019 and another round of US presidential elections in 2020.

Some officials on both sides privately make the case that it is very likely to be 2021 before a deal with the EU could be struck.

EU trade
Trojan horse or inflated threat — what does the TTIP mean for the NHS? 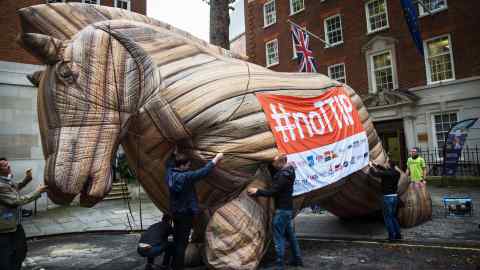 Meanwhile, opponents fret out loud about the improbable possibility of a TTIP leading to the privatisation of the UK’s National Health Service, or suddenly forcing European consumers to cook with chicken bathed in chlorine or beef soaked in hormones. But the most likely looming scenario is of the talks entering a deep freeze, or becoming something akin to a relationship that — despite both sides’ vivid dreams — is stuck on a perpetually awkward first date.

Does that matter? It ought to.

Two of the world’s biggest economies discussing how to improve their relationship is always a worthwhile endeavour. Centuries of history tells us that open economies do better than closed ones. There is no reason to think that the future will be an exception to that rule.

Finding a way to remove whatever barriers exist to trade between two economies that share more similarities than differences and, in a global context, have relatively common values, would be a good thing.

And yet, in an environment where politics is determining progress, those sorts of arguments matter very little.