How to commission a portrait

All you need to know about a commemorative moment

Captured in the soft light of a north window, with hog-hair brushes and in the manner of John Singer Sargent, the life-sized portrait is at once theatrical and calm. The figure is poet and actress Greta Bellamacina, painted by Isabella Watling, one of Britain’s leading portrait artists – who has exhibited at the BP Portrait Award and is a teacher at the prestigious Charles H Cecil Studios in Florence.

While the piece, commissioned by Bellamacina to hang in her hallway, is true to classical portraiture, the stance, the hair, the Simone Rocha dress and the attitude make it modern, relevant and… incredibly cool. And it beautifully demonstrates why painted portraits are getting a new lease of life. At the precise moment that we’re up to our eyeballs in instant, digital imagery, a new cohort of art lovers is being drawn to what can be an exciting, even moving, experience as well as a gratifying investment.

“Certain individuals can bring a quality of insight, a psychological validity and nuance to the painted face that no photograph – especially a self-generated one – ever will,” says gallerist Philip Mould, a leading authority on portraiture. But it’s also about being “seen” by another, adds art dealer Almine Rech, who has herself sat for Julian Schnabel: “We spend so much time looking at on-screen images of ourselves and others that it has become a powerful, magical thing to witness a portrait made by hand, with the spirit captured by an artist.”

Formal society portraits of the great and the good are still thriving, but recent examples, such as the first official painting of William, the Prince of Wales, and Catherine, the Princess of Wales, by Jamie Coreth, and the official presidential portraits of Barack and Michelle Obama, by Kehinde Wiley and Amy Sherald respectively, juxtapose tradition with popular culture. It makes the enterprise seem less stuffy and more intelligible.

“The Obamas’ portraits are formal yet approachable, monumental yet psychologically illuminating, showing what painted portraits can be in 2022,” says Anthony Barzilay Freund, director of fine art at 1stDibs. “Portraits have renewed appeal because of their physicality, formality and expressive power – but also due to the recent proliferation of exhibitions featuring figurative painting by Alice Neel, David Hockney, Jordan Casteel, Jenny Saville and Alex Katz.” London is currently buzzing about Lucian Freud’s portraits, at the National Gallery until 22 January.

But how to go about a commission? Immersion first. The Royal Society of Portrait Painters and the Portrait Society of America have established programmes, linked to their exhibitions, that offer exposure to a smorgasbord of styles and sensibilities, and can help lay the groundwork. “But don’t make a decision based on one or two portraits,” says Mould. “We can be so drawn to the humanity of an individual subject that it can be misleading. You need to see the totality of an artist’s work to get a real sense of it.”

I like to tell the story with the whole figure. It’s not just about flesh but how someone’s shoes are moulded to their feet

It’s also vital to entertain the different “schools” of figurative art, adds artist Tai-Shan Schierenberg, who built his reputation on formal portraiture – from Queen Elizabeth II to Stephen Hawking – but whose mark-making is highly expressive. A judge on Sky Arts’ Portrait Artist of the Year prize, he believes that if “likeness” – especially to a photorealistic degree – is the sole aim, a portrait can lose its edge as a work of art: “Sometimes when the likeness is amazing, but there’s no soul, no one ever talks about the piece again. You need an artist who can capture spirit.”

For those seeking guidance, there are bespoke-art agencies such as Fine Art Commissions, a London-based gallery and matchmaking service for portraits, founded by broker and industry veteran Sara Stewart, which can take you step by step through the process. Of course, some people looking to commission an artist just go with their gut. Alex Eagle, the curator and luxury lifestyle entrepreneur, has commissioned many portraits of family members by artists she met through friends or discovered on Instagram. These include London’s Vanessa Garwood, who painted her children when they were born; Isaac Benigson, whose work is “super-naive, so joyful”; New York illustrator and sartorial satirist Angelica Hicks, who works with brands such as Gucci; and Christabel Blackburn, whose abstract style is accessible and bright. Eagle suggests giving your chosen artist “loads of photos that capture someone when they’re not posing – especially ones of your children when they’re looking gawky as anything. It’s an insight into who they are at their most comfortable. You’re preserving a moment but also a mood.”

“A lot of artists think the biography of a human is in the face, but I like to tell the story with the whole figure,” Blackburn says. “It’s not just about the flesh but how someone’s shoes are moulded to their feet. I love observing strangers; you can tell so much from the way they hold their phone. All the idiosyncrasies…” She usually works from an initial meeting and then from photographs, often working in symbolic or significant components of a client’s life, having agreed on a sketched concept. “What’s so clever about Christabel’s works is that they’re abstract but so detailed,” says Eagle. “The figures are an outline, but you know it’s them.”

You’re preserving a moment but also a mood

Sarah Howgate, senior curator of contemporary collections at the National Portrait Gallery, advises that “even if you love an artist’s work, there must be chemistry when you meet them or it’s not going to work – it’s such an intimate thing.” This is particularly true if you’re commissioning a portrait of your partner, she says. “In my experience, the partner of the sitter is always the most critical voice – they don’t recognise their partner in the portrait; they see them as they were rather than as they are. Consider whether you’re both going to be able to handle the process and the painting itself.”

Rech advocates mixing things up and just “going for it”, and asking an artist that moves you even if they aren’t known for portraits. “Be courageous! They can only say no. And the result could be so interesting.” It’s a move supported by the National Portrait Gallery: while it still commissions traditional portraitists, it now embraces artists of all kinds who are interested in depicting the face, body language, and expression, says Howgate. “We’re trying to get at something different. It’s a nice challenge for the artist too.”

When the gallery reopens next year, following a major reconfiguration, one of several exciting new acquisitions on show will be Zadie Smith by Nigerian-American artist Toyin Ojih Odutola. “The synergy between artist and sitter is everything,” Howgate says. “It was important to Zadie that she was painted by a black artist; what shines is their mutual respect for each other’s work. It’s a really powerful piece – full-length, but nothing else about it is usual.”

“It’s essential to understand what someone needs from a portrait – emotionally as well as anything else, and it matters that people have an emotional response to my work,” adds figurative artist Curtis Holder, a former primary school teacher who won Sky Arts’ Portrait Artist of the Year in 2020. Holder’s signature is his coloured pencil markings: he uses fine, sprayed-on layers of acrylic gouache so that the energetic markings can be seen beneath.. “More than once clients have said that the fragmented style, the loose aesthetic, reminds them of their child who has ADHD or autism and maybe finds it hard to be still – because I’ve worked with children, they feel that I already understand something about them.”

Contrary to expectation, children actually make the best sitters, says Holder. “When they know what the end game is, they are brilliant at it. Especially if there’s a sibling they can compete with.” An exhibition of the artist’s work opens at London’d National Theatre in January.

HTSIThe HTSI arts special, autumn 2022
Me and my muse 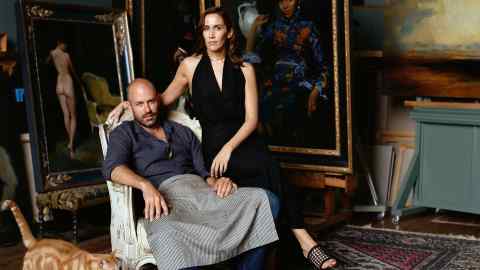 Whoever’s in the frame, smooth the path with questions, Howgate advises. Be honest with yourself about whether the subject can commit the time the artist requires, and clear about how many sittings they require, and where. Some renowned portraitists, such as Jonathan Yeo, who has painted everyone from Dennis Hopper to Tony Blair, have been working via Zoom – opening up the sitting experience to a much wider audience.

When all is done, sit with the portrait for a while. “Art is a mystical, subjective thing – it’s unusual to be comfortable with a portrait straight away,” says Mould. Remember, even the greatest artists can be unpredictable, Rech adds. “Sometimes they show something you don’t want to reveal. But try to be open. If you love art, let them be free.”