When the UK’s largest supermarket, Tesco, began labelling the carbon footprints of its products in 2011, it soon had second thoughts. Finding the scheme labour-intensive and confusing for customers, it decided not to proceed any further.

But less than a decade later, carbon-labelled products are making their way into its stores by a different route.

Quorn, the meat substitute, this year began including carbon footprint labels on its most popular products; Oatly, a popular brand of oat milk, began using the labels in 2019. Unilever, one of the world’s largest consumer goods companies, said this year that it aims eventually to include them on everything it makes, while Nestlé is considering carbon labelling.

“There has been huge growth in the number of companies wanting to put labels on to their products that demonstrate their environmental impacts, and in particular carbon,” says Myles McCarthy, director at emissions consultancy Carbon Trust. Having worked with Tesco on its earlier scheme, the consultancy is now working with Quorn, a 35-year-old meat substitutes maker now owned by the Filipino group Monde Nissin.

“It’s driven by an increase in consumer appetite. . . and also by the growing pressure on organisations and countries to decarbonise and meet much more ambitious targets,” he says. ”Companies are feeling pressure to move forward in this space from a range of groups, including investors, customers and competitors.”

Buyers of meat-free mince made by Quorn can see it accounts for emissions of 1.3kg of carbon dioxide equivalent per kilo, as well as 105 calories and 2g of fat per 100g.

At the moment they cannot compare that with many other foods, as very few boast the label. But Marco Bertacca, chief executive of Quorn, says: “We want to inspire the rest of the industry to follow suit.”

Do the numbers add up?

Calculating the carbon footprint of an individual product is no simple matter. Companies committed to environmental targets increasingly calculate their own greenhouse gas impact, including so-called “scope three” emissions — those that occur along the supply chain, from the production and transport of commodities all the way through to consumer use and disposal.

Analysts at CDP, which produces environmental information for investors, last year found that almost nine in 10 consumer goods producers disclose information on emissions throughout their value chains, but “the robustness of calculation methodologies varies”, with French group Danone scoring highest for its disclosures and Coca-Cola lowest.

Linking those numbers to individual products requires even more detailed data. “Companies are encouraged to work closely with their main suppliers to get better-quality data in terms of what is happening upstream,” Mr McCarthy says. Quorn began with its most popular products, but plans to label its entire range.

The Carbon Trust has labelled hundreds of thousands of products, from cement to bank accounts. Recent certifications include Amazon’s Echo Dot and Fire TV Stick, which will carry the “Reducing CO2” label, meaning that emissions are being cut year-on-year.

Carbon Trust labels, showing the image of a footprint, are among hundreds of eco-labelling options available. Oatly works with another emissions consultancy, CarbonCloud. Canadian directory business Ecolabel Index has identified more than 450 green labels worldwide, including 31 relating to carbon footprint.

Many products have opted for relatively simple sustainability labels, such as Rainforest Alliance or Forest Stewardship Council certification. But Mr Bertacca argues that carbon labelling will go on a similar journey to that already made by nutrition information on foods, with consumers coming to expect hard data.

“I’m old enough to remember when nutrition parameters were introduced, I was asking: ‘What is this number? What does it mean for me?’,” he says. “We’ve started to explain what the [carbon] number means and we believe that by driving the industry and others to do the same, the number will start to develop into a meaningful concept that consumers will start to decide upon.”

You need to have alignment . . . on the methodology you use, otherwise it’s going to be a jungle

For now, Quorn hopes the presence of the carbon label will help push consumers to choose its products over others, even if they are not able to make direct comparisons.

Marc Engel, chief supply chain officer at Unilever, says carbon labelling will help businesses prepare for an era of carbon taxes, and a world in which consumers will want to calculate their own personal environmental impact.

But it will require coordination among companies. “You need to have alignment . . . on the methodology you use, otherwise it’s going to be a jungle of all kinds of labels,” he says. Aude Gandon, global chief marketing officer at Nestlé, agrees, adding that the group supports “an EU-wide harmonised approach”.

The European Commission has launched a consultation on eco labelling, which could result in a legal framework requiring companies to substantiate their claims.

In the long term, Mr Engel argues that, as with nutrition labelling, companies may use an approved methodology to calculate carbon figures, but without external certification of each product.

Lau Tambjerg, a sustainability consultant at climate consultancy EcoAct, says there are technical issues that still need refining, such as the units of product for which emissions should be measured.

For example, a concentrated laundry detergent, if measured by unit of volume or weight, would appear to have higher emissions than a more diluted product, even though concentration helps to reduce emissions per use by cutting greenhouse gases produced through transport.

We get a lot of clients saying they want to get to a particular point, and when you ask them why, they say they’ve seen competitors doing something

The Carbon Trust says interest in its labelling schemes has continued despite the pandemic, with inquiries up by a quarter this year.

Founded almost 20 years ago, it has noticed significant changes in how companies handle sustainability: responsibility has moved from “a team that sat in the corner of the organisation and measured and reported stuff” to board level, says Mr McCarthy. 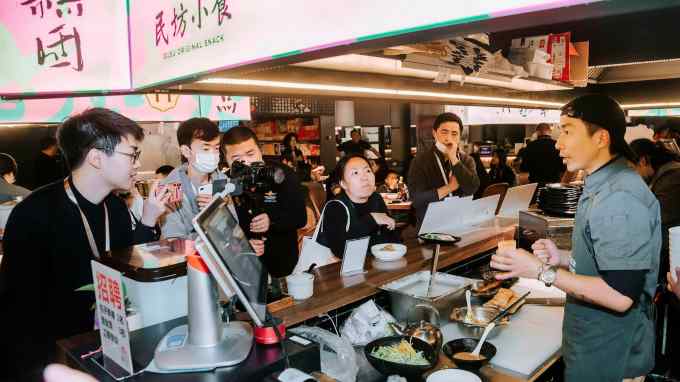