Gregory Meyer in New York and David Sheppard in London

Commuting by car into big US cities is usually a hell of red brake lights. This month congestion has eased for an unsettling reason.

Petrol demand in the US normally rises from February to March. But assorted data from early virus hotspots show the opposite.

Seattle was the epicentre of the coronavirus outbreak on the US west coast, prompting companies such as Amazon and Microsoft to order employees to work from home.

On interstate highway 5 from the city of Everett 25 miles to the north, traffic volumes fell by 4 per cent in the past week. Traffic on a crowded section of the I-405 interstate highway declined by 8 per cent, the state transport department said.

Fuel sales are “slow, slower than usual”, said the manager of an Arco petrol station in suburban Seattle. 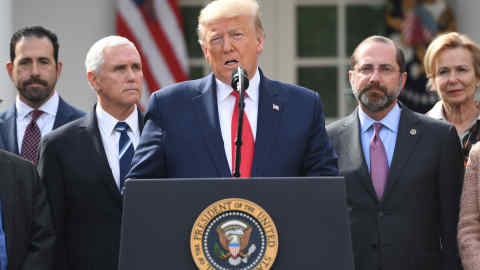 Fewer fill-ups are part of a coronavirus shock that will cut global oil use in 2020, the first decline in more than a decade, the International Energy Agency estimated. Last year Americans consumed 9.3m barrels a day of petrol, almost a tenth of global oil supply, and about half of that is estimated to be for commuting.

For now, gasoline demand still has some support. Data from Genscape, a division of the consultancy Wood Mackenzie, showed that flows of US petrol from wholesale fuel terminals were up 3.1 per cent year over year in the first 11 days of March.

The Energy Information Administration, a US government agency, this week slightly raised its forecast for domestic petrol demand in 2020, suggesting it will be 10,000 b/d more than in 2019.

“Right now students need to get home. People are still driving to the store to stock up,” said Ann-Louise Hittle, a Wood Mackenzie analyst.

“But driving demand will eventually be impacted by the drop in commuting, absolutely,” Ms Hittle added.

Other data suggest this is already happening. US retail petrol sales were 3.2 per cent lower in the week ended March 7 from the same week a year before, according to a regular survey of more than 15,000 stations conducted by OPIS, a fuel price and data service. In the US west, sales had dropped by 5.3 per cent.

In Seattle’s home state of Washington, petrol sales had declined by 8.2 per cent year on year, said Fred Rozell, president of OPIS, a division of IHS Markit. He cautioned that the Washington sample was a relatively small 180 stations.

The prospect of a hole in demand sent US gasoline futures down by a third to settle below $1 a gallon last week. Petrol prices at the pump slid below $2 a gallon across a broad swath of the country, according to GasBuddy, which collects data submitted by drivers.

However, lower prices are unlikely to stimulate demand. A petrol payments service operated by GasBuddy recorded 5.6 per cent fewer US transactions in the week ending March 1 from the week before, and a decline of 12 per cent in Washington state, said Allison Mac, a GasBuddy petroleum analyst.

Ms Mac is based in Boston, another city where coronavirus arrived early. Data from the Massachusetts Department of Transportation showed a sharp drop in traffic delays in the metro area.

For example, on the I-93 interstate highway southbound from suburban Woburn, morning congestion usually extends 10 miles back from Boston. On Tuesday morning the back of the queue was only six miles from the city.

For workers who must commute, some may take cars instead of their customary buses or trains, Mr Rozell said. The number of vehicles crossing bridges and tunnels between New Jersey and New York in the past week was about the same as the previous week, the Port Authority of New York and New Jersey said.