Nicky Haslam: My life in champagne

The interior designer, author and socialite says fizz has lost some of its fun

So rare, you’re like the sparkle of old champagne,
orchids in cellophane
couldn’t compare to you.

Thus went the lyrics on big-band leader Jimmy Dorsey’s 1957 record in the days before both the fizz and the flowers became ubiquitous. But while orchids are now cheap as chips, champagne has gone through the roof.

I remember reading an article headed “Is this the end of the £5 bottle of champagne?” — but that was years before cheap supermarkets Lidl or Asda got their mitts on a producer. That supermarket stuff is probably what those rows of handsome, handpicked waiters (there’s a glut of them, too) proffer on trays at the opening of any envelope. But in headier days, popping a cork was more than just a rare treat: it was a kind of ritual.

Champagne was treasured, discussed, appreciated — not heedlessly knocked back before grabbing another flute. Champagne traditionally started a grand dinner, especially suited to oysters (never with caviar, that had to be vodka or, to purists, aquavit), and ended it with the savoury.

It was poured into those wide, flat glasses, designed to release the scent as well as the taste, and any debutante worth her salt would give it a swirl with the swizzle stick on her charm bracelet lest “the bubbles get up my nose”. (I suppose these days something else has already gone up those noses.) It is a far cry from the sacrilege of sports stars spraying magnums of Dom Pérignon around the triumphal podium.

Champagne is not for all occasions — that is why prosaic Prosecco exists. The latter, being “softer”, actually mixes more pleasingly with a Bellini’s peach juice, as discovered by Giuseppe Cipriani at Harry’s Bar in Venice. Any fruity addition to the real thing, particularly in the revoltingly acidic Buck’s Fizz, is a disaster.

The only exception is a champagne cocktail, which, with its smidgen of brandy and sliver of orange, can make one believe one is Cole Porter at the Ritz Bar, c1933. If you want to get staggeringly drunk, try topping up your glass with a slug of vodka.

But how has this tsunami of champagne flooded the world, and particularly England? Driving across France where its grapes are grown, I am astonished to realise it's about the same size as Kensington and Chelsea. How can so tiny an area produce so much?

With those original French estates I have an unlikely connection. My very English grandmother’s surname was de Sillery, and she always maintained her ancestors came from Champagne. A decade ago I met Rémi Krug, scion of that marque, and asked him if the name meant anything to him. He replied that not only was Sillery one of the oldest vineyards, he had recently acquired it.

I immediately ordered a case from de Sillery, which was predictably delicious, but there are many English vineyards producing wines of similar excellence.

I am lucky enough to have one near my house in Hampshire. Coates & Seely consistently wins the highest honours for their growths, which they call, with appropriate gusto, “British fizz”. This year their “Perfide” blanc de blancs 2009 was named “supreme champion” in the first UK Wine Awards, and also won a gold medal in the International Wine Challenge. More tellingly, Coates & Seely’s fizz is the only English marque to be stocked by the George V and Bristol hotels in Paris.

So, like white orchids, champagne is not so rare any more. But it cannot be denied that the essential, immaculate purity of both does lift the spirit. Let’s drink to that. 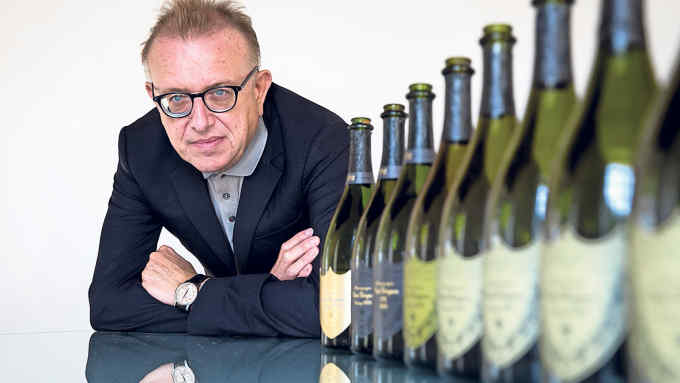